The Predator Mask is one of the most important features of a Predator and gives the Predator a few different advantages. The main one is it enhances the number of vision modes it allows the Predator to see in which can highlight various things such as heat or radiation. The vision and mask can be used to record sounds and phrases spoken by humans to be played back later. This also extends to actual recorded visual footage as seen by the masks in AvP Requiem and The Predator. There is a targeting laser on the mask which helps direct the fire of the shoulder cannon. Lastly, the mask helps the Predator to breathe or at least supplements oxygen with something else.

The most important feature of the Predator mask are the various vision modes it allows a Predator to see in. The Predator vision modes are a standard feature on every single Predator and they vary in design from each film due to director’s wishes and the effects and technology that is available. The core vision mode is heat, or infrared thermal vision, which allows the creature to see heat spots like humans more clearly. But many Predators in the film see in more which can be controlled from their wrist gauntlet. Their vision modes are connected to their shoulder cannon, So when a Predator is about to fire a shot, their vision homes in on the target through a red triangle for increased accuracy.

There has been some debate as to what a Predator’s vision mode is without their mask. In Predator, without his mask, Jungle Hunter has a reddish vision mode and Berserker’s in Predators was quite similar too. However, in Predator 2 and The Predator, City Hunter and the Upgrade were able to see in the same heat vision without a mask.

All the way through the first movie, the main vision was infrared thermal vision which allowed the Jungle Hunter to see anything that was hot. Blue means its cold whereas red obviously means something is hot.  The Predator’s natural vision can be seen in the picture below. This is what the Predator sees when it takes off its mask to fight against Dutch. There was some discussion that the Predator was a lot older so his vision could have been deteriorating compared to other Predators.

Behind-The-Scenes: When they first did the heat vision, they had a real heat vision camera. It was a huge camera and it could only get 4 feet from the truck. It worked but the ambient temperature in Mexico was in the 90s so people were the same temperature as the jungle. To get around the issue, the effects crew put ice water on the jungle and have the actors stand next to a fire just before the shot. It was expensive and it took a week just to get one shot. In the end, director John McTiernan went off to a video special effects house who did commercials. He did it in secret behind the backs of the studio executives. He took the regular film and had them turn it into a negative. They made it all blue, isolating certain areas and attach false colour to them.

In Predator 2, effects technology improved considerably for the sequel and the thermal blue vision returns but it’s much more sharper and clearer here than the first film. Predator 2 is notable for its inclusion of  four additional vision modes for the City Hunter as well as the standard infrared vision. What these vision modes are exactly is based purely on speculation. They were all used in the meat locker to find Keyes’ team. Another point to make is that in Predator, when Jungle Hunter removed his mask, his natural vision was red. In Predator 2, when Harrigan removes the Predator’s mask, the Predator still sees in the regular infrared vision. 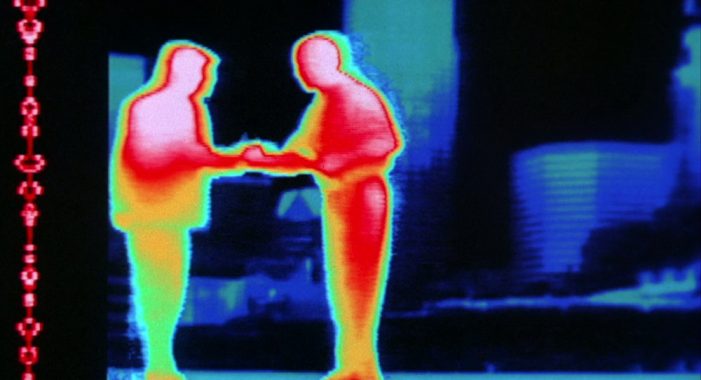 In the screenshot below, we can see the regular infrared vision. The lamps in the room show up as heat spots. He moves onto the second vision.  The lamps seem to be highlighted in red while everything else is in blue. The next vision mode seems to show metal objects a lot clearer. As you can see below, a lot of the machinery can be made out.

The fourth vision mode is which is mostly yellow could be radioactivity. The final fifth vision mode is ultraviolet as the light from the UV torches show up in this vision mode. The Predator’s hands also shows up when he looks at them and he realises that his cloak is ineffective because of the radioactive dust in the room.

In Alien vs Predator, director Paul Anderson wanted a different thermal vision and opted to give the heat vision a red colour. Everything mostly shows up in red with orange spots indicating heat areas. Aliens don’t give off any heat so the Predators in AvP have a new vision mode for them. Interestingly, in the video games, the vision mode is known as electromagnetic and it’s red. In AvP, the vision mode highlights aliens in green with a black background making them easy to spot. Also interestingly, Predators themselves can be seen in both the red thermal vision and the Alien green vision.

On top of these two visions, the Predators also have two more, possibly even a third one. When the Scar Predator picks up Weyland, he looks at his body. He switches from the red thermal vision, to a yellow/green vision which makes his skeleton more clearer. The Predator looks down at Weyland’s body and it’s now a blue vision mode and slightly pink behind his rib cage. And yet another vision mode or a slightly different variant of the previous one, the Predator can tell where the cancer in Weyland has spread as seen in red behind his rib cage.

Following on from Weyland, later in the film, Scar uses his vision modes on Sebastian. The first one is probably the same as the one he used on Weyland. He appears as a blue skeleton but you can seen body organs in pink. He switches to the alien vision or perhaps a variant of that. The chestburster can clearly be seen in green but the human’s skeleton is blue.

The next three shots show the vision used when the Falconer Predator tracks his prey. From what can be seen it acts as a chemical-sensor and picks up pheromones from where the prey has been i.e. their tracks. The next screenshot shows what the Super Predators natural vision looks like. This is what Mr. Black sees when he takes off his mask after he kills the Classic Predator. Notice that the image is a lot sharper and higher in contrast than the natural vision of the regular Predator seen in the original film.

We never see the Fugitive Predator‘s vision in the film but there is a few scenes showing the heat vision from the Upgrade Predator. The vision mode is similar to the Super Predators’ vision in Predators. Heat from either Predators or humans are highlighted in yellow/red. Like previous Predators, he can analyse audio conversations too.