Each Predator in every Predator and Alien vs Predator film possesses a cloaking device which makes them almost invisible to humans. It’s not complete invisibility as it bends light. In the right lighting, you can still make out its silhouette, more so if the creature is in motion. It can be activated from the Predator’s wrist computer. One thing that is seen to disrupt it is water and a few times throughout the films, we can see water causing blue sparks to appear when it touches it. This then, disables the cloak for a short time. Other things such as bullets and anything impaling the Predator can also disrupt the cloak.

The cloak also appears to extend to some of their weapons if they’re attached to their body but this seems to vary from scene to scene. Some scenes show the weapons as cloaked but other times, their wristblades or shoulder cannon might not be cloaked. In Alien vs Predator, we saw a spear being thrown at somebody which was cloaked and then it became uncloaked after a few seconds of hitting something.

Jungle Hunter uses the cloak throughout the first two thirds of Predator. Particularly, in the hot jungle, when some of the commandos saw the Predator cloaked, it looked distorted, like a heatwave. A trademark of the Predator is the eye-flash. When Mac encounters the Predator, the cloaked Predator eye’s flash yellow before he disappears into the jungle.

When Dutch escapes the Predator and falls over a waterfall. The Predator is in pursuit and falls into the water. When it emerges from the water, blue sparks appear around its cloak and eventually renders him completely visible, at least for a short time. Later, when Dutch sets an explosive trap for him, he ignites the explosion which damages his wrist computer. The Predator is unable to use his cloak at all.

Behind-The-Scenes: The cloaking effect was accomplished by having a man in the jungle in a red suit. They pulled mattes off of it. The camouflage effect is made up of concentric inlines of the background, the Predator itself and what’s inside the Predator. What they really wanted is a guy to swing around in the trees and they built an enormous bungee rig which they got a few shots out of. One idea they had was to use a monkey. They made a red suit for a monkey but the problem was the monkey just hid in the trees and didn’t do anything. It didn’t swing from tree to tree. 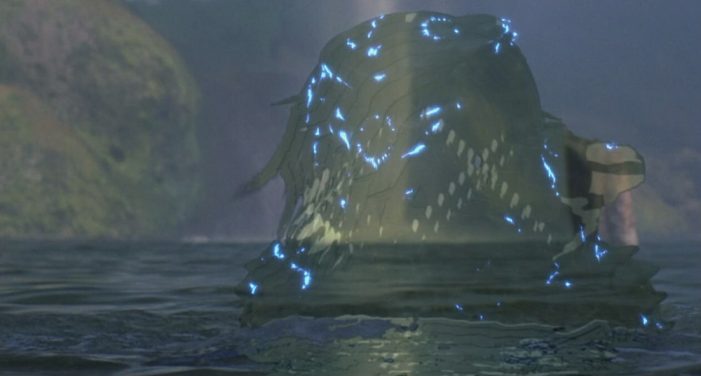 In Predator 2, City Hunter uses his cloak throughout the film. We can first see the distortion effect when Harrigan is on the rooftop. Harrigan thinks he sees something but the Predator disappears.

Behind-The-Scenes: In order to accomplish that effect, they shot a number of plates. Firstly a plate of the background itself with nobody there, another shot with a wider lens and finally, a shot of a man in a red suit. The red suit didn’t have any dreadlocks as it would have been difficult to matte properly so the red suit was just kept simple.

Later, when Harrigan meets King Willie in the alley, the cloaked Predator jumps down. As he walks through the puddles, blue sparks appear and disables his cloak temporarily.

Behind-The-Scenes: Underneath the water was a dolly track that was driven by a motion-control computer. The camera itself was sitting on the dolly about an inch above the water. The pneumatics under the water were programmed from the same computer that’s making the camera move down the alley on a dolly. The pneumatics were the things that caused the water to blow up. They were copper tubing with about 20 holes in them and were driven by compressed air. A solenoid was used to turn the air on and off which was driven by the computer.

There was a combination of the alley shoot with the pneumatics and a black-stage shoot featuring somebody walking on marks. The two were combined together for the effect. The actual camouflage effect was a photo-chemical process. You would build a set of mattes, put the shot together. The blue sparks were hand-animated on an animation stand and were combined optically. 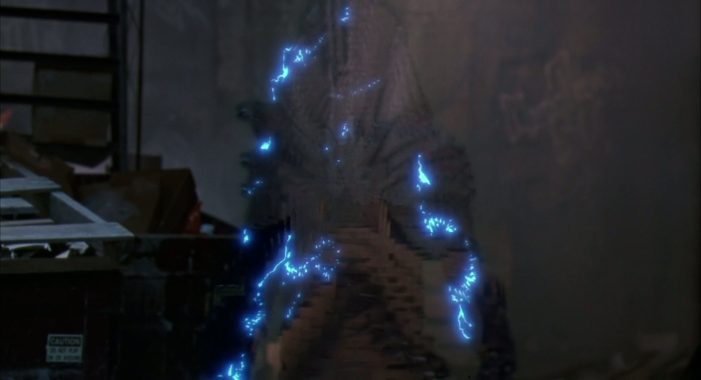 We next see the Predator cloaked when he attacks the people on the subway. When Harrigan reaches the slaugherhouse. Keyes reveals that Predator was using a cloak and set up cameras to show its pheromones as it moved. In the slaughter-house, Keyes’ team sprayed the place with radioactive dust which adheres to his body would have made his cloak ineffective had he tried to use it. Moments later when he took out Keyes’ team, the explosions caused the sprinklers to activate disabling any attempt to use his cloak.

One thing to note is that when the Predator is cloaked, his weapons are not. In the Jamaican attack in the penthouse, his Netgun, Spear and Wristblades were visible when he used them but the Predator himself was cloaked.

In AvP, the three Predators use their cloak throughout the first part of the film. They attack the group at the Whaling Station. Interestingly, for the first time in a film, the cloak also extends to the Predators’ weapons. When a Predator throws his spear, the spear is cloaked but seems to become visible a few seconds after leaving the Predator. We see a cloaked Celtic Predator being fired at and the subsequent shots causes the cloak to be disabled temporarily.

Inside the pyramid, the Predators cloak to get the better of the humans. As a cloaked Chopper is about to kill Lex, the Grid Alien appears and impales Chopper. As he holds him up, his cloak stops working and he becomes visible. It’s clear now that the Predators’ cloaks are completely ineffective against Xenomorphs.

In AvP Requiem, you can see the cloak in use throughout the film. When the Wolf Predator exits the ship when he arrives on Earth, you can see the water disrupting the cloak. In the forest, Wolf is caught disposing of a body in the forest. Wolf cloaks and catches up with him and kills him. Later, we see a cloaked Wolf pursuing the Xenomorphs to the Power Plant. One of the Aliens manages to knock him off the walkway. Wolf falls and gets impaled on something, which disables his cloak. We never see Wolf use his cloak after that.

In Predators, the Super Predators have an improved version of the cloak generator. It appeared to be more resistant to damage than cloaks we’ve seen previously. For example, when Nikolai shot at the cloaked Tracker Predator at point blank-range with a pistol, the cloak was not disabled. The effect of the Super Predators decloaking is slightly different in that they shimmer into view.

The Super Predators use their cloak in the battle at the hunting camp with the accompanying eye-flash. We see Nolan using the technology when he meets Royce for the first time. Classic Predator uses his cloak to get the better of the Berserker Predator suggesting that cloaked Predators don’t appear at all in the normal heat vision.

The cloak is initially seen in use by the Fugitive Predator at the start of the film. When McKenna accidentally shoots him, it hits the Predator causing a shimmering effect on his cloak. The cloak appears to be textured this time around. McKenna finds a ball item taken from the Fugitive that renders him invisible which he uses in the shop at the beginning and later at the crashed Predator ship. The Upgrade Predator has a cloak which he uses in the battle at the crashed Predator ship. After being fired upon, he becomes visible again. He later uses it momentarily in the battle in the forest.