AvPGalaxy | Literature | Alien Novels | Alien – Out of the Shadows Preview 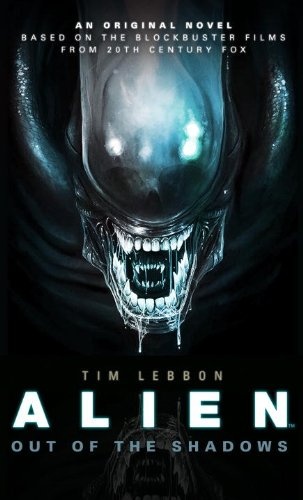 Preview of Alien – Out of the Shadows, kindly provided by Titan.

Everyone and everything was screaming.

Several warning sirens blasted their individual songs—proximity alert; damage indicator; hull breach. People shouted in panic, confusion, and fear. And behind it all was a deep, rumbling roar from the ship itself. The Marion was in pain, and its vast bulk was grinding itself apart.

Lucy and Cornell, Hoop thought from his position on the floor. But whether they were alive or dead didn’t change anything right now. He was senior officer on the bridge. As scared and shocked as all of them, but he had to take charge.

He grabbed a fixed seat and hauled himself upright. Lights flashed. Cords, panelling, and strip-lights swung where they had been knocked from their mountings. Artificial gravity still worked, at least. He closed his eyes and breathed deeply, trying to recall his training. There had been an in-depth module in their pre-flight sessions, called “Massive Damage Control,” and their guide—a grizzled old veteran of seven solar system moon habitations and three deep space exploration flights—had finished each talk with, But don’t forget YTF.

It took Hoop until the last talk to ask what he meant.

Everyone knew that a disaster like this meant the end. But that didn’t mean they wouldn’t fight until the last.

“Lachance!” Hoop said, but the pilot was already strapping himself into the flight seat that faced the largest window. His hands worked expertly across the controls, and if it weren’t for the insistent warning buzzers and sirens, Hoop might have been comforted.

“What about Captain Jordan and Cornell?” Powell asked.

“Not now,” Hoop said. “Is everyone all right?” He looked around the bridge. Baxter was strapping himself tight into his seat, dabbing at a bloodied nose. Welford and Powell held each other up against the curved wall at the bridge’s rear. Sneddon was on her hands and knees, blood dripping onto the floor beneath her.

“Yeah.” She looked up at him. There was a deep cut across her right cheek and nose. Her eyes were hazy and unfocussed.

Hoop went to her and helped her up, and Powell came with a first aid kit.

The Marion was juddering. A new siren had started blaring, and in the confusion Hoop couldn’t identify it.

“Atmosphere venting,” he said. “Hang on.” He scanned his instruments, tapping keyboards, tracing patterns on screens that would mean little to anyone else. Jordan could pilot the Marion if she absolutely had to. But Lachance was the most experienced astronaut among them.

“Shut it,” Welford told him.

“We should get to the escape pods!” Powell said.

Hoop tried not to listen to the exchange. He focussed on Lachance, strapped tightly into the pilot’s seat and doing his best to ignore the rhythmic shuddering emanating from somewhere deep in the ship. That doesn’t feel good, he thought.

The four docking bays were in a protruding level beneath the ship’s nose, more than 500 yards from the engine room. Yet an impact like that could have caused catastrophic structural damage throughout the ship. The surest way to see the damage would be to view it firsthand, but the quickest assessment would come from their pilot and his instruments.

“Get out,” Powell continued, “get away before the Marion breaks up, down to the surface and—”

“And what?” Hoop snapped without turning around. “Survive on sand for the two years it’ll take a rescue mission to reach us? If the company even decides a rescue is feasible,” he added. “Now shut it!”

“Okay,” Lachance said. He rested his hands on the flight stick, and Hoop could almost feel him holding his breath. Hoop had always been amazed that such a huge vessel could be controlled via this one small control.

Lachance called it The Jesus Stick.

“Okay,” the pilot said again. “Looks like the Delilah took out the port arm of the docking level, Bays One and Two. Three might be damaged, can’t tell, sensors there are screwed. Four seems to be untouched. Atmosphere is venting from levels three, four, and five. All bulkhead doors have closed, but some secondary safety seals have malfunctioned and are still leaking.”

“So the rest of the Marion is airtight for now?” Hoop asked.

“For now, yes.” Lachance pointed at a schematic of the ship on one of his screens. “There’s still stuff going on at the crash site, though. I can’t see what, but I suspect there’s lots of debris moving around down there. Any part of that could do more damage to the ship. Rad levels seem constant, so I don’t think the Delilah’s fuel cell was compromised. But if its containment core is floating around down there…” He trailed off.

“That was the good news,” Lachance said. “Marion’s lost two of her lateral dampers, three out of seven starboard sub-thrusters are out of action. And there’s this.” He pointed at another screen where lines danced and crossed.

“Right. We’ve been nudged out of orbit. And with those dampers and subs wasted, there’s no way to fix it.”

“Not quick. I’ll have to run some calculations.”

“But we’re all right for now?” Hoop asked. “The next minute, the next hour?”

Hoop nodded and turned to the others. They were staring at him, and he was sure he returned their fear and shock. But he had to get a grip, and keep it. Move past this initial panic, shift into post-crash mode as quickly as he could.

“Kasyanov and Garcia?” he asked, looking at Baxter.

Baxter nodded and hit AllShip on the intercom.

“Kasyanov, Garcia, you there?” He winced, then threw a switch that put what he heard on loudspeaker. There was a whine, interrupted by staccato ragged thudding.

“What the hell…?” they heard Kasyanov say, and everyone sighed with relief.

“You both okay?” Baxter asked.

“Fine. Trapped by… but okay. What happened?”

“Delilah hit us.” Baxter glanced up at Hoop.

“Tell them to stay where they are for now,” Hoop said. “Let’s stabilize things before we start moving around anymore.”

Baxter spoke again, and then just as Hoop thought of the second dropship, Sneddon asked, “What about the Samson?”

“Can you hail them?” Hoop asked.

Baxter tried several times, but was greeted only by static.

“No, switch to the cameras in Bay Three,” Sneddon replied. “If they’re still coming in, and Jones sees the damage, he’ll aim for there.”

Baxter nodded, his hands drifting across the control panels.

A screen flickered into life. The picture jumped, but it showed a clear view out from the end of Bay Three’s docking arm.

The Samson was less than a minute away.

“But those things…” Sneddon said.

I wish you were still here, Lucy, Hoop thought. But Lucy and Cornell had to be dead. He was in charge. And now, with the Marion fatally damaged, an even more pressing danger was manifesting.

As Welford broke out the emergency space suits from units at the rear of the bridge, Hoop and Lachance exchanged glances. If anything happened to Hoop, Lachance was next in charge. But if it got to that stage, there’d be very little left for him to command.

“We’ll stay in contact all the time,” Hoop said.

As the three of them pulled on the atmosphere suits, the Marion shuddered one more time.

We should be assessing damage, Hoop thought. Making sure the distress signal has transmitted, getting down to med bay, doing any emergency repairs that might give us more time. But the Samson held dangers that were still very much a threat.

That was priority one.