After the success of Aliens vs Predator 2 a couple of years ago, along comes the expansion pack to the game. Aliens vs Predator 2: Primal Hunt is the expansion pack containing nine new levels over three species. The game is in fact set before AvP2 began so it’s sort of like a prequel to AvP2. The Predator starts off 500 years before the present, the Corporate missions are set just before AvP2, and the Predalien missions start off 500 years before AvP2, but moves into the present…

Nine new levels have been added to the expansion pack and there are three missions for each species. Instead of playing as a Marine in AvP2, you now get to play as a Corporate called Dunya. There are also the Ancient Predator missions which take place 500 years before the incident. Finally there is the Predalien and you get to play as a Facehugger and a Chestburster. One thing I noticed about Primal Hunt is the amount of bugs or glitches it contains. When I started playing as a Predator, the Alien enemies acted very oddly. For example, occasionally when Aliens are running towards you, they’d get stuck in part of the map and not find an alternative route to get to you. Maybe it was just me and my version of the game but I did encounter numerous glitches in the game. 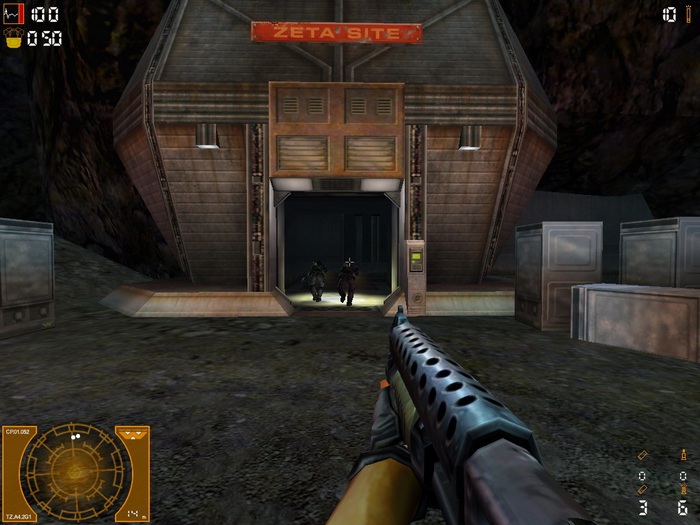 The sounds in the expansion pack have pretty much stayed the same as they were in AvP2 although there are new sound effects for the Predator’s Energy Flechette. All characters have retained their same voices apart from Dimitri who has a Russian accent. The music, however, has changed and it seems to be quicker for most of the game but there are moments when it slows down to reflect the scene.

It’s the same planet as Aliens vs Predator 2 was set on which was called LV-1201 and this is where you’ll be fighting. You’ll actually get to battle on the surface of the planet when playing as a Predator and a Corporate and encounter new indigenous creatures that are native to the planet. These creatures are an interesting aspect to the expansion pack but can get very annoying. On the first Predator mission, you’ll first encounter a Mutated Bull which is very powerful. Then you’ll meet these strange Camouflage Creatures who blend into the scenery but as soon as you come near them, they charge after you. The most annoying creature is the Ground Worm which seems to be invincible to all forms of attack. They tend to be just over a specific territory and when you’re on the ground, their heads rise and attack you. 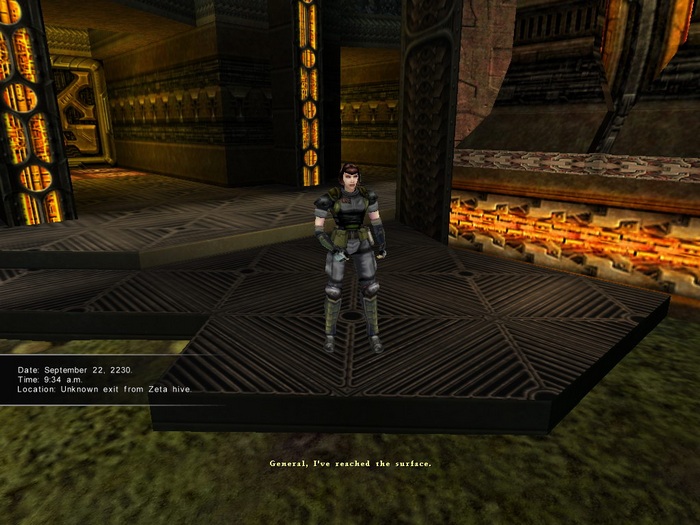 The Corporate, equivalent to the Marine in AvP2, is one of the species you play as and you also have three hard levels to progress through. The first takes place in the Predator Ruins, the second on the planet’s surface, and the third in Pod 5. The first mission seems to be the hardest and longest out of the three but it is fun when you have the two Iron Bears backing you up at the beginning. The second and third missions, however, seemed to go very fast and they were quite short compared to Marine missions in AvP2. The plotline starts off by Rykov telling Dunya of this mystery Artifact and she is the one to go in and track it down. In the first mission, you do find the Artifact and bring to Pod 5 but there are two other species who are also after the Artifact…

The Corporate comes complete with three new weapons to keep you occupied throughout the missions. The first is Dual Pistols which basically allows you to hold two Pistols at once and fire them simultaneously. Not really a new weapon to Primal Hunt but the double pistols are quite effective against a few of the creatures you meet. The guns themselves fire quite rapidly but the only problem is the time it takes to reload both guns. The second new weapon is the Sentry Gun, a fast-firing automatic gun. Found mainly on the last mission, you have to rely on them a lot. E.g. in the last scene, try to collect a few up and set them up wisely so that they cover all angles. The final new weapon is the Turret Gun which is left exclusively to the last scene on the third mission. This uses ammo up very quickly but it is fixed to the ground, although you can move around 360 degrees. You do have an improved Motion Tracker which now scans 360 degrees around your body so you can see whether enemies are coming from behind you. 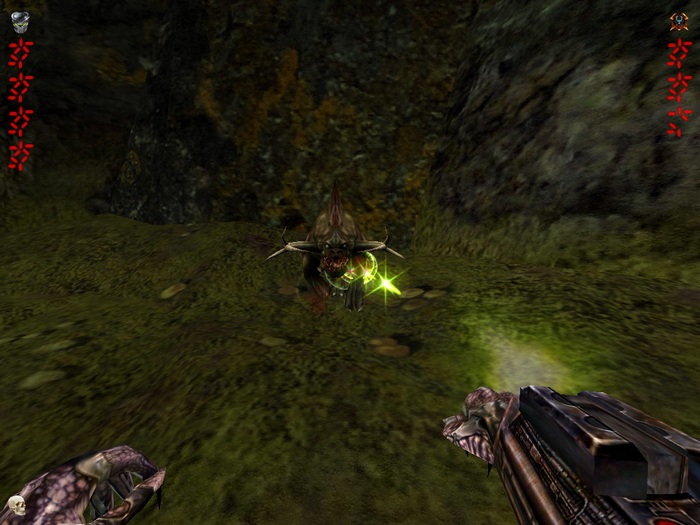 The Predator campaign takes place 500 years before the present so you are playing as the so-called Ancient Predator. In the first mission, you get to meet the three indigenous creatures native to the planet. The second takes you into the Predator Lair where you’ll be defending from Aliens and tracking down Dunya. About mid-way through the second mission is where you actually get trapped for 500 years in the Stasis fields and you’ll join Dunya in the present. I love the way how all the three species’ plots link up in this level, especially with the Predator trying to hunt down the Artifact and following the destruction Dunya has left in her path. The third and final mission brings you to Pod 5 to track down the location of the Artifact but unfortunately as you finally get the Artifact, things take a turn for the worse… Overall, I was very pleased with the Predator missions, and the storyline but the first mission did drag on after a bit.

The Predator is only given one new weapon for the singleplayer in Primal Hunt and that’s the Energy Flechette which fires out fast beams of green light. Not a bad weapon to start off with but the Plasmacaster still remains the highest medium-range weapon in my opinion. In multiplayer, there is the ability to self-destruct which isn’t that brilliant when you do it. Also to reflect the time is set 500 years ago, the Predator has a new style cloak and the on-screen interface has turned to red. In conclusion, I wasn’t very happy with the new weaponry or the new-look cloak or interface but the makers have tried to make it different from AvP2. 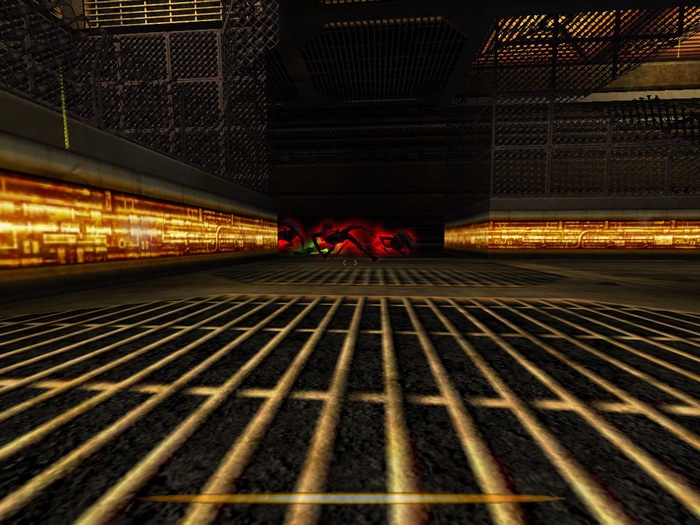 The Predalien missions begin in the exact same way as the Alien missions in AvP2. You start off playing as the Facehugger, then you evolve into the Chestburster and finally into a Predalien. The only difference this time is that as a Facehugger, you facehug a Predator rather than a Marine. The first mission takes you to the Predator Lair where you start off playing as a Facehugger 500 years before the present time. This mission is especially difficult as you’ll be hiding from Predators along the route and it’s much harder than dodging the Marines in AvP2. You will end this mission by facehugging a lone Predator and then back to the present, the Chestburster is born. You start the second mission in Pod 5 and you’ll be in search for a food supply so you can evolve. This mission is not that difficult but there is times when you just keep going around in circles but when you’ve found the food supply, along comes the Predalien. Still in Pod 5, you must rescue the Artifact from Pod 5 but there are many enemies in your way…

I thought the final mission was very challenging and long but at the end, I must mention when the Corporates decided to blow up Pod 5, the screen was making me so dizzy. The final challenge of the mission was defeating the two Exosuits which wasn’t much of a challenge as all you had to do was use your claws once and it would bring them down. In terms of new attacks, the Chestburster and Facehugger have been given the new ability to break down panels by pouncing or biting. The Predalien also gets the ability to Head-Bite and you’ll be very pleased to how it’s done. Four spikes rise from its mouth and attack the victim, slicing off their head. Overall, I really liked the Facehugger and Chestburster missions, but the Predalien mission was a bit complicated and annoying when the screen started shaking towards the end. 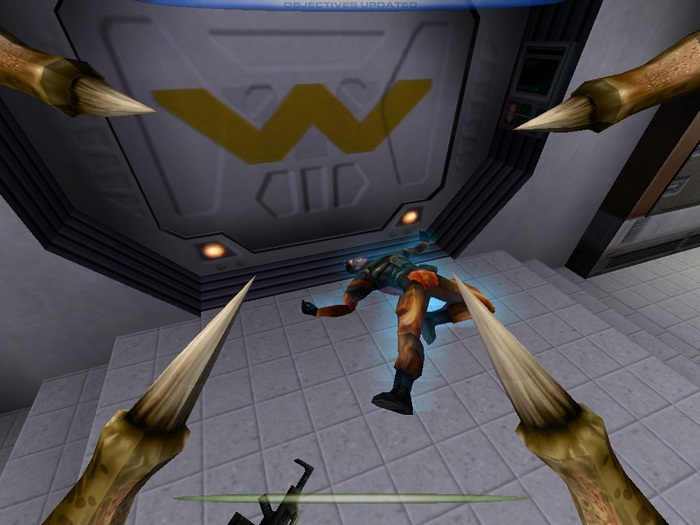 The multiplayer aspect of Primal Hunt is pretty much the same as the multiplayer in AvP2 but with a few minor changes. Marines and Corporates have the Sentry Gun and the Turret Gun at their disposal, the Predator has a self-destruct ability along with the Energy Flechette, and the Alien has a minor change. When an Alien stuns someone or they have been effected by an EMP Grenade, the victim can move slowly and have a small chance at defending themselves. Four new multiplayer maps have been included in the expansion pack and you also have new server options to keep you occupied with.

I am definitely impressed with the storyline of the game and how all three species’ plots tie in together. I thought maybe there could have been an extra mission for each of the three species to make a total of 12 altogether. With my game, there were certain parts of the game which had a few glitches but it didn’t stop me enjoying the game. For the price, £20 in the UK isn’t a lot although, it’s probably better for people to buy it in a double-pack with AvP2 or wait until they lower the price a bit before you buy it. Overall, I would definitely recommend to any big fans of Aliens vs Predator 2. It adds a bit of variety to the game, the storyline is brilliant and it’s interesting to see what the environments were like 500 years before AvP2 was set.