This is a AvP2 Marine Walkthrough guide for the 2001 video game Aliens vs Predator 2 for PC. All seven missions from the marine campaign are listed here. 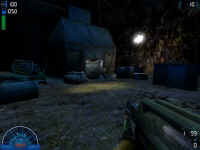 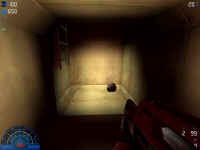 After the cut-scenes, go forward to your fellow marines. You’ll soon see a door. When you get to it, get the Hacking Device out and hack the button nearby the door. After running a bypass the door should open. Continue through onto the next area. When you enter the next area, the roof will cave in behind you so you can’t go back. Continue down the corridors and you will see someone get killed. Go in that direction and turn left and you will be at a door. Open the door and you’ll hear someone being killed by a predator.

If you go forward from the door, there is a panel in the floor in the corner of the room. Open the panel and drop down. You’ll be in a room with a truck so open one of the doors nearby and you will be in the next area. You will see some marines on the bridge and then there will be an explosion on the bridge. That was caused by a predator. There will be a sign nearby the bridge so go right direction from the sign.

When you’re walking along the surface a marine will fall to the ground and you should soon see a truck being blown up by a predator. Watch out for the truck and go towards the place where the truck came from. Follow the route around and you’ll reach another area with bodies hung up on some rope. Go towards the door and use the Hacking Device to enter through.

When you enter, go forward and you will see a platform underground with some ladders emerging from the top. Jump down into that and go through the opening in the wall. Follow the route along and around the corridor and you might see two objects on the motion tracker. These are just little bugs but you can kill them if you want to. You’ll eventually get to a switch. Turn the System Charge switch on and go back to ground. Along the way keep out the way of the steam and use the ladders to get back onto ground.

Near the ladders is a door. Go through that into the next area. Follow down the corridor and you’ll get to a door which has been smashed through. Go through that and in the room is an elevator. Before calling the elevator, get the Pulse Rifle bullets on the shelf nearby. Call the elevator and go inside it and press the switch. When the door opens, you’ll see a desk on your left. Get the Shotgun ammo go around the walls and you’ll find a Control Desk.

Press it and the shutters in front of you will open showing the Dropship land. You now need to make your way back to ground level and report to Major McCain. Go back down the elevator and back through the smashed door and you’ll be back to the Landing Pad. Go to Major McCain and he’ll speak to you. Next to him you’ll find a Grenade Launcher and some ammo. Head towards the big doors which are open. Inside is an APC and you’ll soon start the next part of the mission.

Behind the nearby crates is a door. Go up the steps and enter through that. Head down the corridor and turn left. Go through the broken door and you’ll have two choices to go down. Go left towards the crates and the floor beneath you will collapse. Continue walking and you’ll come to two doors. Ignore the left one and go through the right one. Inside the room, you’ll find some Flares and some Health. Head through onto the corridor and to the right is another barricade blocking your way.

Walk down the corridor and enter the first door on your left. On the nearby desk is some Shotgun ammo and there’s a big hole in the floor which has been burnt through by acid. Try to go down the hole making sure you don’t hurt yourself on the way down. There’s also a box of Flares half way down if you want them. When you’re at the bottom, go around the crates piled up and you should find a door. Go through it and again you have two choices to go down. Go left because the other way is barricaded. Follow the corridor and you need to go in the first door on your left. This room is the Security Station. You can continue back down the corridor if you want in order to pick up a Shotgun. Come back to the Security Station if you do.

Beside the Control Desk is a Control Panel. Press the button and use the Hacking Device to restore the power. Your objective now is to return to the Landing Bay. An alien drone will come out of the ceiling. Take care of him and go through the air-vent nearby. Another alien drone will burst through the vent giving you access to it. Go through the vent watching out for any aliens which attack you from behind and in front of you. Towards the end of the vent, go left and up the ladder into another room.

You’ll see a dead person in the corner and there’s an Alien on the ceiling. Kill him and get the Amour and the Pulse Rifle ammo in the room. Enter the next room and go through the door behind the crates. Another Alien will attack you just before the door. You’ll arrive at a room with a big staircase. Go up to Level 2 and grab the ammo nearby and go through the door. Turn right and follow the corridor watching out for aliens which attack you.

An alien will soon break the barricade down. You can either go through the kitchen and up the ramp or open the door, go through the room and up the collapsed area. Both ways will take to a corridor which you started in. When you get out of the corridor, you’ll enter the area with the APC. Go towards the APC and watch the cut-scenes and get ready for the next area. You’ll soon discover that Sergeant Hall has been captured by the aliens. When you start the next section, you’ll notice a red dot on the motion tracker.

This helps you to track Sergeant Hall. Go left and you’ll see an alien jump across the walls. Keep an eye on the motion tracker and continue down the alley. A number of alien runners and drones will attack you from all sides so be careful. Continue down the alley and you’ll eventually arrive at some wide doors. You can go right of the door and at the end of the alley, you’ll see three bodies hung up. Nearby are Pulse Rifle ammo, Health and a Shotgun. Go back to the wide doors and enter through them.

You’ll emerge at another area. Go down the alley and you’ll come to the Hive entrance. Enter the Hive and go left and follow the corridor around. If you’re lucky, you won’t get attacked by anything. Hidden near the door right at the end is a small opening. Go through that and you’ll be at another door. When you open the door, a number of alien drones will attack you so be on guard. Go around and you’ll arrive in another room. On the floor is an acid-burnt hole.

Whatever you do, don’t jump down the hole. Instead go down the elevator and you’ll be near the eggs. When you get near the eggs, they will hatch releasing a facehugger. You can however shoot them before they hatch. Go right when you first enter and you’ll see Sergeant Hall stuck on the wall. Talk to her and eventually a Chestburster will burst out of her chest. Get the Amour and the Pulse Rifle next to her and you objectives will be updated. You now have to return to the APC. Go back up the elevator and back through the room, through the opening in the wall. When you get out of the Hive, numerous aliens will attack you. Keep running towards the APC which will protect you. That is the end of the level.