So, here we are, the first Alien vs Predator game in 4 years and it’s based on the marmite-like movie Aliens vs Predator Requiem. But that’s not what had caught my attention, it was the developers. Rebellion. The Rebellion. You know the ones, they made the original AvP for the Atari Jaguar and they made that kickass AvP for the PC. You know the ones. Well, anyway, they’ve got the duty of doing a tie-in to the latest movie.

Single Player
If you’re looking for an intricate story with Aliens vs Predator Requiem you’ll be in for a disappointment. AvP Requiem is straight forward to the point of pre-mission info usually being nothing other than “The Serpents are spreading. Destroy them and don’t let the humans know you’re here.” Seriously, there’s pretty much nothing in it. While the Aliens being called Serpents made me chuckle – reference to the first AvP film – it wasn’t really much. 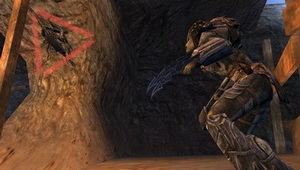 The game itself is only very loosely based on the film. You play as a single Predator who comes down in his own drop-pod – the Wolf – and have to clean up an Alien infestation but that’s about it. A Predator ship crashes and unleashes Face-Huggers onto the town, you fight in a power plant and a hospital. Those are about the only connections to AvP Requiem. Oh and the Aliens being killed with more ease than the most evil equation ever: kid+ants+magnifying glass = simile of Aliens in AvP Requiem. The single player mode is split up into three branching paths. Each one starts and ends at the same point but each path takes you through a different area in good old Colorado. There’s Underground, Industrial and Suburban. Each path takes you through specific locations such as the sewer system in Underground and through a high school in Suburban.

Skirmish
Skirmish was a massively popular feature of the original PC Alien vs Predator and for the first time in seven years, has made its way back in AvP Requiem. While playing the skirmishes, I actually noticed all the cool moves here. While playing the story mode, I just went in and blasted stuff but with the skirmish, it was fun to let the Aliens come for me. You can experiment with all the cool counters moves and if you stay locked onto the Alien attacking you, you can swing back to him and bam! Shoot him with your Hand Cannon. The equipment you can use in skirmish mode is all linked to the single player aspect. You can go into it without having played any of the missions, you get your basic shoulder cannon and wrist blades. You’ve finished the game, you can choose from everything. In some ways, it’s a sort of fun training mode. 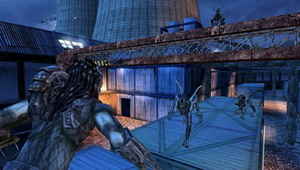 It’s not special in anyway. Like in the actual game, it has next to no variety. You fight three minutes worth of Alien Warriors and Praetorians/Young Queens, whatever they are. You have a choice of,  I think it’s 5 levels from the single player campaign to fight your way through a three minute horde of Aliens to rack up the highest score you can.

In the grand scheme of things, it’s nothing new or innovative but it’s fun for training, familiarizing yourself with the gameplay and a nice way to kill four minutes. There’s an online version of skirmish but I haven’t got that to work yet.

Gameplay
To sum it up, it’s a dumbed down version of Predator Concrete Jungle. Plays in much the same way as that but due to the limitations of the PSP, it’s not that complex. Analogue stick moves you around, the two shoulder buttons rotate the camera view and play a part in the target locking system. The rest of the buttons are your equipment selection, firing, cloaking and etc. It’s all pretty simple. At it’s core, Requiem is just a hack-and-shoot. When you start a mission you’re given the option to choose two weapons. They’re usually either hack or shoot. It does have some interesting things to it, like the counter and if you keep locked on, you can follow through with a finishing blow after you watch Wolf flip an Alien. 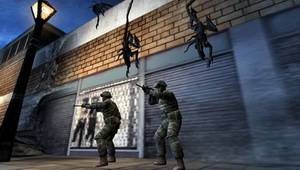 One of, if not the, major problems with the game is variety. Or should I say lack of? Alien wise we only have the two enemies. Your usual warrior/drone, whatever you prefer to call it and what I’m guessing are either Praetorians or young Queens which…are the same thing really. And there are of course the National Guard. So in total, we have three count them, three enemies in the game. Doesn’t matter that we saw chest-bursted dogs or cows, the lack of variety in the enemies just caused the game to get stale as it went on. There was a nice opportunity for hybrids there. Hell, even fighting Face-Huggers would have been different.

Enemies is not the only area with this problem. Weapons. The ability to unlock different weapons by taking different routes was supposed to be one of the major replay aspects. However, when there are five weapons to unlock in the game it kind of gets stale. When using these particular aspect as a selling point, one would expect more weapons. 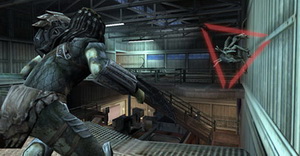 Sure, we get our dual shoulder cannons – which makes for some pretty entertaining game moments like blasting two Aliens in the face – but we could have also got dual Shurikens too. Speaking of which, I thought the aiming for the shoulder cannons could have been more interesting. Like having the ability to lock onto two enemies instead of just one or trying to fluke it and shoot two Aliens at once. There was just so much missed out on. The whip for example, or these laser trap mines that kept getting mentioned. Sure, they were in the game but only to blow up big chunks of the ship. They missed out on the opportunity for some real cool mine tripping action here.

Now I don’t know if this was to tie in more into the movie or not but the game is pretty much a cakewalk. Sure, Wolf is portrayed as the Chuck Norris of Predators in the movie but is that any reason for so overpowering him in the game. As the Predator you can literally walk through swarms of Aliens. It’s possible to play through the game without even dying.

Visuals/Sound
I thought the game looked fantastic. I don’t know if it’s because this is the first PSP game I’ve played but I thought it was a great looking game. I’d often swing round to have a peek at how badass Wolf looked with his spear out or the dual shoulder cannons up.

Overall it looked rather similar to Rebellion’s AvP1 for the PC. I kept getting flashbacks to the multiplayer levels like Subway or Meat House. Felt rather nostalgic in that way. The vision modes looked great, especially with that little flicker of interference. 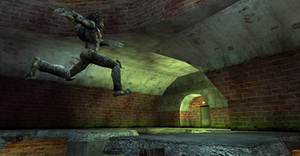 Music on the over hand is a little up and down. At some places it’s really effective – the Deep Sewers level, for example, is probably the most atmospheric level of the game – while in other places it’s just generic. The weapons sound fine. Nothing much to talk about there.

Conclusion
This game isn’t special by any means. For a casual game, they’d probably think it was rubbish. This game is geared more towards the (Alien vs)Predator fans, the younger Predator fans which probably explains the easiness of the game. If anything AvP Requiem has just proved that an (Aliens vs)Predator game could work on the PSP if the developer had time because at the end of it all, this game is just a movie tie-in. 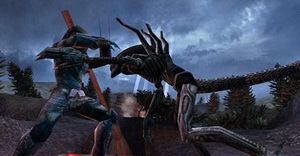 I don’t know, there’s just not much to the game. It could quite possibly be due to the wall of secrecy Fox put up around AvPR. Rebellion might not have had much to work with. Single player wise there’s just not much replayability. The lack of weapons and upgrades means that you don’t even need to go back and get all the honor points. The only thing that’d keep people coming back would be a four minute Alien killing frenzy – the skirmish, in case you didn’t get that. I’m inclined to give this one a 3/5. I just hope this isn’t the last bow for Rebellion. With an apparent AvP game coming out on the 360 and the PC, I sure hope we’ll be seeing the return of an atmospheric and great AvP game.