I remember when AvP Extinction came out way back in 2003. I rented it and didn’t like it very much. Ever since then, I’ve had such a negative opinion of it… up until now. I bought it on ebay and I found out it’s actually a decent game. So, AvP Extinction is a real-time strategy game that came out for X-Box and Playstation 2 in 2003. You can play as either the Marines, Aliens or Predators and there’s seven missions for each species. Some of the missions are pretty long. Most of the Alien missions took me well over an hour to complete. Same for most Marine and Predator missions. Each mission has at least one objective and also an optional objective. There’s also a target time you can do it in. I guess this is where replayability comes in. If you complete all the objectives in each mission within the target time, you’ll get a gold medal next to the mission in the main menu…

There’s plenty of game help for first-time players too. There’s a tutorial mode where you can learn about each species which is quite useful. There’s also extensive information on each unit which you can access when you’re in a mission. This is called Bestiary. It tells you all the strengths and weaknesses of each unit as well as other characteristics. 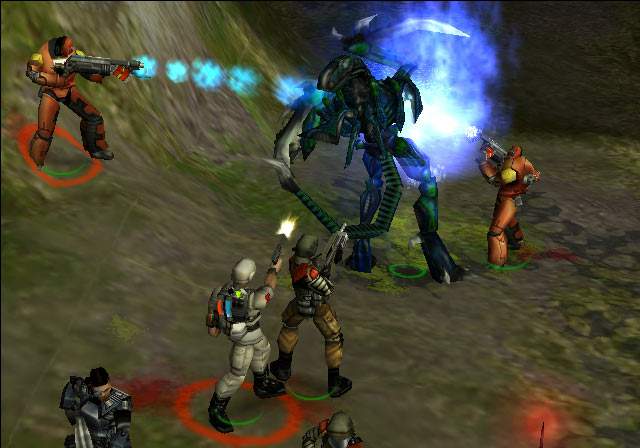 So the first missions I played were the Alien missions. I have to say this is by far the most interesting species to play as. Essentially, you start with a Queen in most missions which you can command to lay eggs. These contain Facehuggers which can impregnate any other living creature apart from other aliens. A Chestburster emerges and evolves into an alien. Runners can be made from Kurn or Krilitics, Drones from Oswocs, Warriors from humans and PredAliens from Predators. Praetorians can be made by impregnating any host from a Praetorian Facehugger. It’s also extremely useful to have a Praetorian on your team as it can transform into a Queen if the other one dies. When upgraded, it can also transform into either a Ravager or a Carrier. Ravagers are huge killing machines and are pretty tough. Carriers are pretty weak and are used to transport Facehuggers around.

I have to say I really love all the different alien units. They all have the own special characteristics which can be very useful and they all can be upgraded. In order to buy upgrades and do other things, you need Infestation Points. These are earned when you kill and impregnate a host. Carriers, unfortunately, I never got a chance to use much. Usually, because they are not as useful as Ravagers. A lot of people say the aliens are the weakest species but if you have full population of 45 aliens, you can take down anything easily. 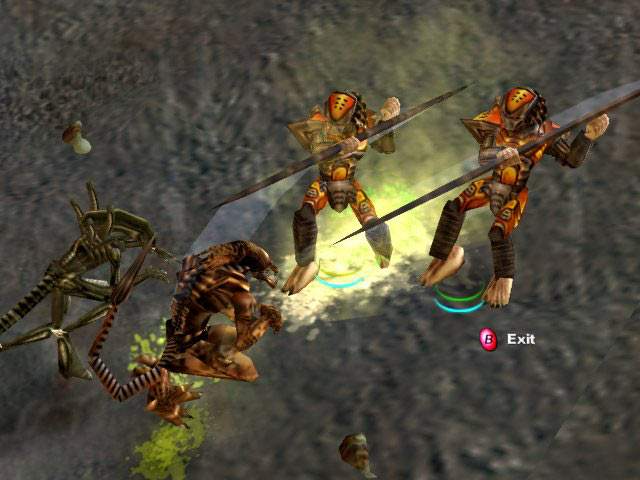 After I finished the Alien missions, I went onto the Marine missions. These aren’t as fun as I would have liked. You can have a maximum of 25 units on your team at once. There’s several different units which can be ordered via your CommTech unit. Synthetics are vital because they detect hidden units, Medics are vital too since they heal everybody. The main problem I had with the Marines is that you have 3 crucial units that you have to protect at all costs. Synthetics, Medics and CommTechs. If you lose your CommTech, it’s pretty much game over. They’re also pretty weak units in terms of attack and defence and the enemy AI usually tries to kill these units first. At least with the Alien and Predator campaign, the enemy has to destroy the Queen or the Shrine which is no easy task.

Other units consist of Infantry, Smartgunners, Flamethrowers, Snipers, SADAR Troopers, Exosuits and Sentry Guns. The latter two are pretty pointless. One Exosuit takes up 4 units in your population and are expensive. Sentry Guns are only useful for defending something and aren’t really required in any of the missions. In order to buy new Marine units, you earn credits by repairing Atmosphere Processors and killing enemies. The Marines as a whole do pack a punch and have a lot of firepower. I don’t think they’re as strong as they should be. A big group of Aliens or Predators can make short work of them. 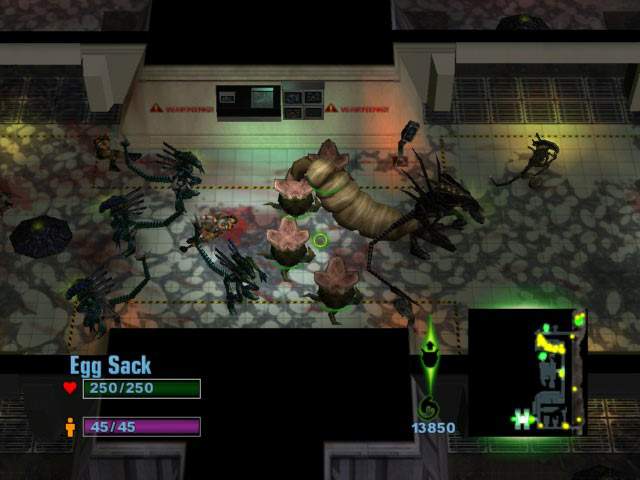 So after finishing the Marine missions, I moved onto the last species, the Predators. The missions usually feature a Shrine which you can order new units with honour points. Honour points can be earned when you take skulls from creatures. Predators can have a maximum of around 16 units (varies with each mission) including Brawlers, Hunters, Spear Masters, Disc Masters, Stalkers, Vanguards, Hydras and Blazers. Hydras and Blazers are super powerful units that can destroy anything in their path. Stalkers are the Predator snipers and are extremely useful. You can usually go through each mission with one Stalker killing everybody.

The Predators are pretty strong. They can cloak making them invisible and the only things that detect them are Synthetics and aliens that emit spores. Cloaks drain Predators’ energy bar though. This refills slowly if you don’t use the cloak. Another bonus of Predators is that they can heal themselves at anytime but this decreases their energy meter. Vision modes can also be purchased as well as upgrades which means they’re able to see creatures outside of their normal vision range. The Shrine is pretty strong. It can fire at multiple target but it can’t take enemy fire continuously for long. It does heal itself automatically though and restores the energy bars of nearby Predators. PredGuns can also be purchased which are pretty strong. They’re the equivalent of the Sentry Guns but they can move on their own and heal themselves. 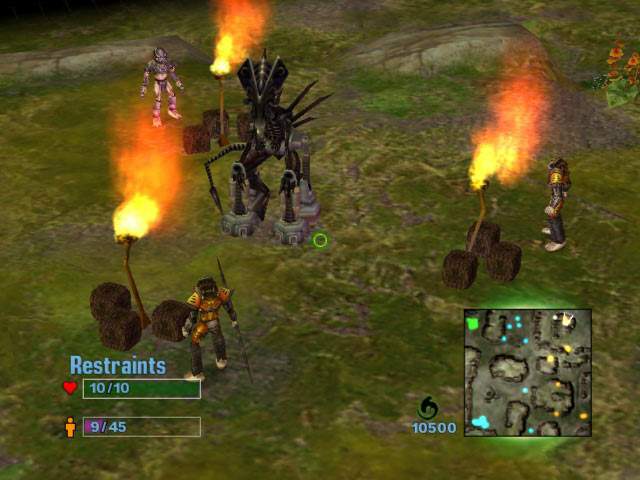 All three species are somewhat balanced. Predators can only have 16 units, Marines have 25 and Aliens have 45. They all have pros and cons but the Marines could have done with a few more advantages. The Predators are fun to play as but it’s the Aliens that take the trophy for me. I loved the alien life cycle and how it all worked. A frustrating problem I had with the game is that units would spontaneously wonder off from the rest of the group. It generally only happened in the Marine missions but it was very annoying.

I guess it came as a surprise to everybody that Fox made this game for consoles rather than PC. That’s another complaint. Not only that but also diverging from an already established FPS genre. Despite this, AvP Extinction works pretty well on my PS2. The controls are well thought-out and work perfectly. Of course, nothing can be as good as a mouse and keyboard but it’s as good as a console gets. You can move the left analogue stick to move the camera to wherever. The right analogue stick moves over the mini-map so you look at far away places on the mission. You can use the buttons to select your units. I think the only downside to the controls is that you can’t rotate the camera so there are a few moments where you just can’t see what’s going on. 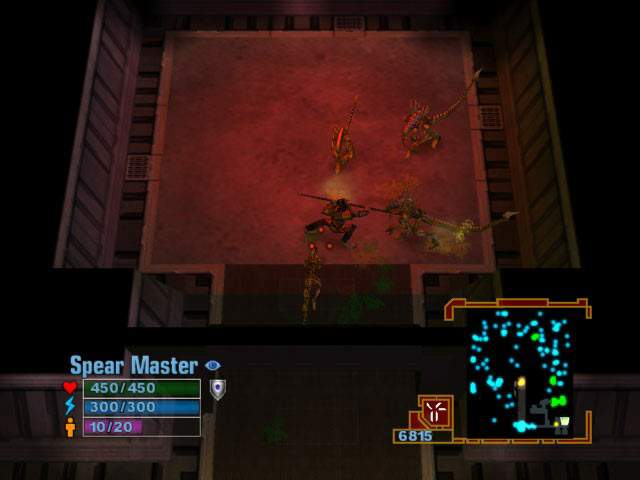 The graphics are okay. There are generally only three different terrains in all the missions. Jungle/Grassy, a darker purple terrain and a lighter terrain. There’s also missions that take place in buildings and caves. The unit models look good and the animations are done well. Gameplay-wise, there’s some serious frame rate slow down though when many units are fighting on the screen all at once. The sounds are good and everything alien/predator related sounds as it should. The Marines I can’t say the same for. The voices from the Synthetics and other units are pretty boring and uninteresting. But sound effects for the guns are good.

Positives: Alien life cycle, missions are quite lengthy, controls are good, varied number of units, lots of extensive unit information in the menus.