Announced late last summer and coming to us not a month after the release and subsequent ravaging by critics of the long anticipated Aliens: Colonial Marines; Angry Mob Games, developers of the entertaining and highly successful “Predators” iOS/Android tie-in title, are bringing us their second game set in our beloved universe, Alien vs. Predator: Evolution. 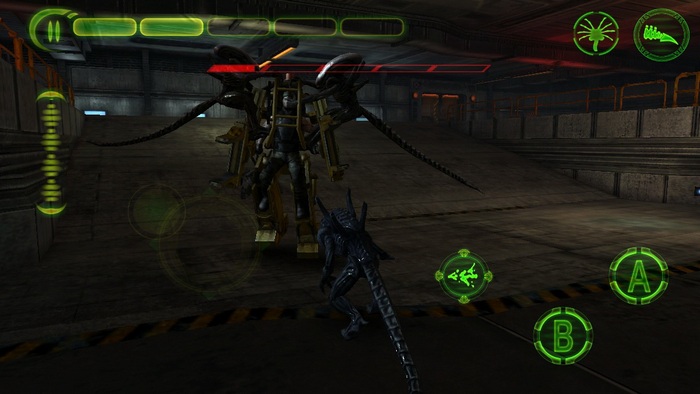 The game is set on a distant planet (I’m going to guess LV-412 based on a W-Y recruitment poster seen in one of the levels) where a clan of Super Predators, who all happen to look like the Berserker, Falconer, and Tracker, have captured a Xenomorph Queen from deep inside an ancient temple. They intend to use the queen to control the Aliens and wipe out the Jungle Hunter clan of the more traditional Predators.

Of course, a Weyland-Yutani facility and marine base happen to be nearby, and they snatch a couple eggs for their own experiments. The plot, as expected, is pretty thin, but does the job. The concept of one Predator clan using Aliens to attack another reminded me of the latest Alien vs. Predator comic: Three World War. It was an interesting opportunity to bring the Super Predators into the Alien vs. Predator universe.

You play alternating missions as an Alien or Predator; marines are only here for the munching and slicing this time around. The first missions for both species are interesting as you start as a doomed Alien and Predator under siege by the Super Predators. You can put up a good fight, but ultimately, Mr. Black takes you out. As a Predator, you receive the distress call from your defeated clan mate, only to have your ship blasted in orbit by the Super Predators.

After you evacuate, it’s just you against an army of Xenomorphs, Soldiers, Synthetics, and Super Predators. As the Alien, you start as a facehugger, tracking down a hopeless victim to impregnate. This bit was fun as it reminded me of the first Alien level of Aliens vs. Predator 2, quite nostalgic. Eventually, you become a fully grown Xeno, free of Super Predator control, with the sole purpose of eliminating them and freeing your enslaved race. 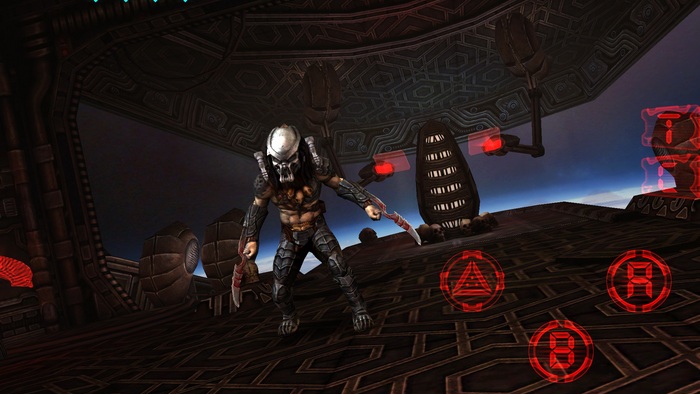 So that’s the set-up. Either as an Alien or Predator, you’re both out to bring down the Super Predators from their power trip. There are 18 main missions with 11 side ones. The environments are pretty par for the course when it comes to Alien vs. Predator. You’ve got your marine compounds, research facilities, dank sewers, and ancient temples, as well as some wide open outdoor segments. These familiar environments have their own unique look and feel to this game which I enjoyed exploring.

There were a couple short segments in the Predator ship that I rather liked. Similar to what AvP: R for the PSP did, the look of the ship blends the Predator 2 style with that of the Alien vs. Predator films. What story is present is told by some nice artwork and short descriptions on the loading screens before you begin a given mission.

The campaign features some interesting moments like crawling through vents or being chased down a tunnel by an APC as the Alien, and solving a fairly simple puzzle within the pyramid as the Predator. There are also a number of boss fights that feel wonderfully old-school.

The game took me around seven hours to complete, with the side missions. I found it depressing yet amusing that this little smartphone game ended up taking me longer to finish than Aliens: Colonial Marines on the highest difficulty setting. It was more difficult too. In fact, it was downright punishing at times. Certain segments where you’re swarmed by a herd of Xenos, or trying to sneak past a patrolling marine dropship that’ll take you out in a few seconds if you’re spotted, were very frustrating. 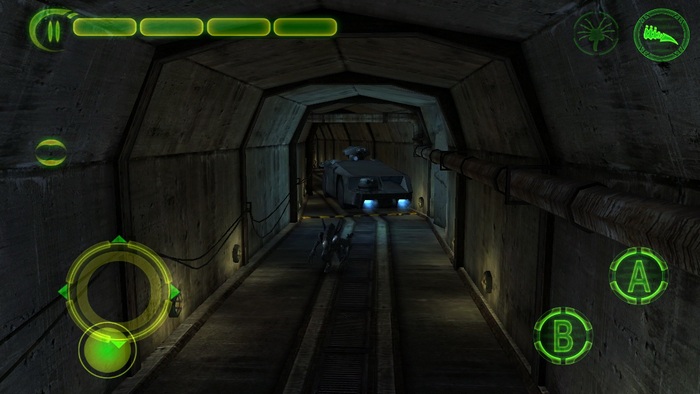 You constantly have to be upgrading your character to have any hope of completing the campaign. As the Alien, you also come across Super Predator controlled Aliens that you must face. I found these Alien vs. Alien parts to be very difficult, as I’d often get surrounded by a whole group of them, quickly boxing me in and preventing my helpless Xeno from dealing out effective combos. Overall, the campaign was lengthy, challenging, and somewhat immersive.

Alien vs. Predator Evolution is a straight-up brawler game. If you’ve played Angry Mob’s previous mobile title, “Predators,” you’ll feel immediately comfortable with the controls. It feels like a hybrid of that game and AvP:R for the PSP. The Camera can be controlled either by touch or automatically. Either way feels a little wonky but functional.

As both species, you walk around rather slowly but you can tap B to dash around. You’ve got your movement on the left and your two attack buttons on the right. These two buttons are used to perform various combos which require some degree of timing. There’s a pretty good array of different combos that vary depending on what weapon your character has selected. Combat feels fast and fluid. You can strike, block, and counter.

Naturally as the Alien you’ve got your claws and tail. Mostly you’ll use one or the other, switching between the two with an on-screen selection button. But eventually you’ll be able to spit acid and call in facehuggers as backup. As the Predator, your options are much more varied: You’ve got your wristblades, combisticks, plasma guns, smart discs, laser mines, razor whips, and net guns, all of which have more powerful versions to unlock. 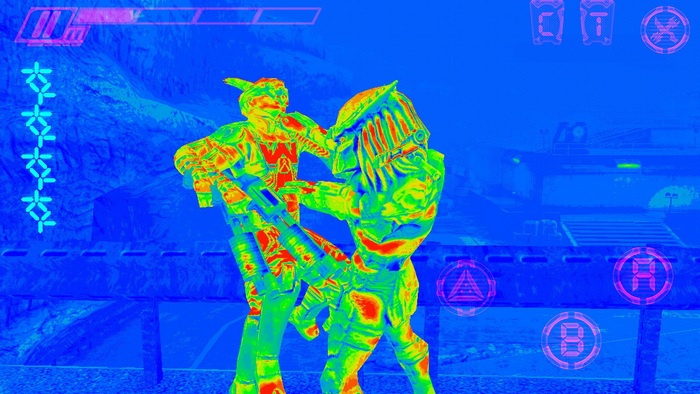 The Predator also has his standard vision modes: thermal and xenomorph detection. In one Predator mission the power is disabled and you have to rely on your vision modes to effectively engage your enemies.

I hope you like trophy kills because you’ll most likely be doing plenty in this game. Once you’ve battered an enemy to low health, a skull icon will appear over his head for you to tap. Performing a trophy kill refills either one or more health bars (depending on what upgrades you have selected).