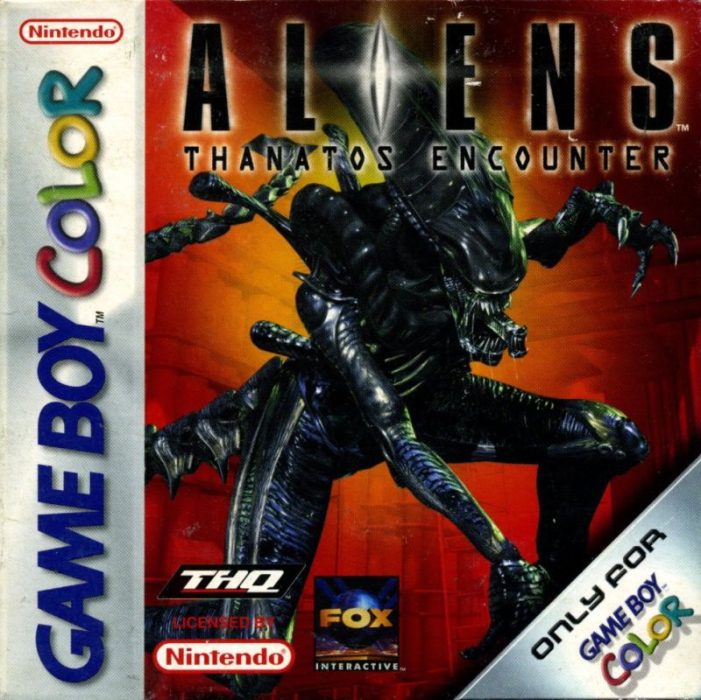 With the imminent release of Aliens – Infestation for the DS, I found my mind wandering back to the previous Alien titles for Nintendo hand-held and I soon found myself putting my old Thanatos Encounter cartridge in my equally as old GameBoy Colour. It was developed by Crawfish Interactive, published by THQ and released in 2001. Other than the cabinet arcade shooter Extermination, Thanatos Encounter is actually the last Aliens only game to be released.

I never had the pleasure of playing Aliens – Thanatos Encounter when it was first released in 2001 but instead, like many who want to play it now, I ended up getting it second hand off a friend of mine. eBay’ll be the best place for those of you wanting to get a cartridge now and you should be able to pick one up for a couple of quid or find a ROM online but I prefer the proper GameBoy experience.

The game opens with a short introduction animation in which we learn we’re aboard a marine vessel returning to Earth from a training mission. A distress call from the freighter Thanatos causes the ship to be rerouted to investigate. The introduction has some faithful recreations of the Sulaco-class ship and does actually look pretty.

Thanatos Encounter is a third person, birds-eye-view shooter. The perspective can sometimes be a hindrance as you view will sometimes be interrupted by bulkheads or crossbeams but it doesn’t occur very frequently.

At its core, the game has some a very simplistic game mechanic but it’s spiced up by some cool gameplay features. My favourite being the ability to use both hands (each assigned to the A or B button). So you can run guns a-blazing, M4A1 in each hand. If you want to be cautious, you can go in with motion tracker in one hand, trusty shotgun in the other. Or if you really want to be wild, go in with a powerful weapon that requires both hands such as the smartgun or the incinerator.

There’s a small selection of weapons in the game, all coming straight from the films so the iconic weaponry is there in the form of the smartgun and the pulse rifle. There’s also a pistol, shotgun, flamethrower and grenade launcher. The different weapons all result in different death animations for the Aliens as well which is a nice added touch.

Something that really made me smile was the ability to use the power-loader. They can be found on a couple of levels when you’re moving through the cargo bay sections of the freighter. They boost your health but at the cost of slowing you down but there was just something about being able to use them that put a smile on my face.

You can also choose which marine it is you wish to play with. All of them have a variance in their attributes which are speed and stamina (health). Some are faster at the expense of how much punishment they can take and visa versa. I found myself playing most often with Corporal Brooke since he was the most well balanced. However the speedy marines can become very useful under certain circumstances…

Another awesome gameplay feature of Thanatos Encounter is that when your marine finally succumb to his injuries, he is taken by the Aliens and cocooned at a certain point in the level. You’re given 200 seconds to find this marine and rescue him otherwise he is lost from your pool of playable characters for the rest of the game.

I can’t say I ever played many GameBoy Colour games so I can’t really compare the graphics but it does look a lot better than the two I had played (Harry Potter and Mummy Returns). It makes use of the colour palettes at the consoles disposal to help differentiate the various sections of the Thanatos and to ensure we’re always moving into new and graphically different levels. I especially liked the Hive sections of the game. It really helped keep the game fresh as the gameplay can get stale at times but what can you expect from a GBC game.

We’re faced with a small variety of Aliens as well. All the stages are there, face-hugger, chest-burster, adult and Queen. The largest variety comes in the adult forms as there are numerous sized versions and also some with minor changes in the appearance (possibly to be something akin to Praetorian?). The nice thing about the chest-bursters is that they only appear when you “rescue” certain survivors that are scattered about the level. This can sometimes be a pain as if you’re trapped in a certain way, they’ll soon make short work of you. I think I was killed most often by the chest-bursters.

The Aliens damage you by running into you and after the first few levels, they are capable of spitting acid at you instead. The biggest and baddest of all the Aliens is the Queen that you encounter during one of the final levels of the game. She’s actually immobile, using her own acid and a constantly respawning guard of warriors to stop you.

One major disappointment with the game is the extremely poor AI of these Aliens. They’ll often get caught on the edge of the scenery, being trapped on walls or behind crates or etc. It makes it easier for the player but it does take away from the experience.

Overall, I thoroughly enjoyed playing this game. It’s extremely simple at its core but those small touches really help lift the game up. It wasn’t too easy, I had to redo several levels and rescue several marines but it’s certainly not a frustrating game. It’s just fun. That’s as simple as I can describe it. If you’ve still got one of the older GameBoy games or you want to try it out on an Emulator, it’s certainly worth the few pennies or the effort.