Aliens Infestation is a 2011 sidescroller video game developed by Way Forward and published by Sega for Nintendo DS. 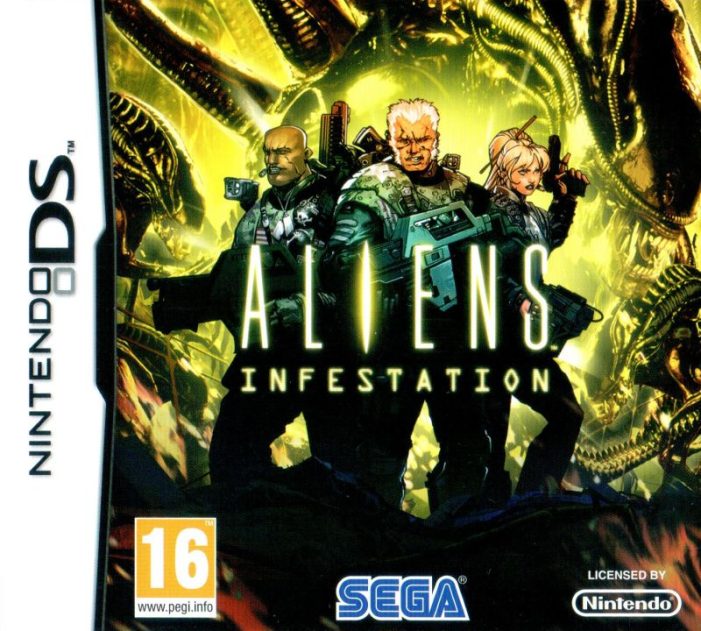 GAME OVER MAN, GAME OVER!

Immerse yourself in the Aliens universe on Nintendo DS in this action-packed, platform shooter with a hardcore, retro feel and a deep storyline that tailors itself to your game.

Lead your own specially selected team of Colonial Marines into action to rescue captured comrades and battle hordes of Xenomorphs with a vast array of weaponry from the legendary Aliens film title.

Can you handle the tension and terror which meets you at every level?

A gameplay video was leaked onto YouTube in May 2009 which showed a couple of minutes of footage from a game. At the time of its discovery it was known only as Aliens: Colonial Marines. The DS title was being developed by Way Forward in association with Gearbox. Way Forward originally pitched the game in late 2007 but development didn’t begin until 2008. They spent 2008 developing it but after that work was cut back until 2011. It was rumoured that the game was complete but Sega cancelled the game due to financial reasons.

Gearbox was working on Aliens Colonial Marines and Infestation was intended to be a tie-in game for it.  Gearbox provided a lot of support and Way Forward maintained that level of collaboration throughout. Infestation shares characters and plot lines between the two adventures, but focuses on different squads and missions. In May 2011, Sega had the game classified in Australia, suggesting the game will indeed be released. In July 2011. Sega officially announced the game for a September 2011 release.

Aliens Infestation got a fairly positive reception upon its release. In terms of magazines, GamesTM scored Infestation 6/10 saying “On a surface level, Infestation is a polished and entertaining use of the license while it lasts, but beneath lies a pretty average shooter – one that with a little more thought and ambition could have easily been something more memorable.” Official Nintendo Magazine gave it a positive review with 82% saying “With all this taken into consideration, Aliens Infestation is still great. It’s a lengthy game that takes the controls of Contra, combines them with the non-linear map exploration of the Metroid and Castlevania games.”

The online press praised the game for its references, atmosphere but criticised the lack of variation in the playable characters and the high difficulty. IGN gave it 8/10: “Yet the game manages to impress anyway, pulling upon tried and true gaming concepts with a great mix of tense atmosphere and action.” Destructoid scored it 8.5/10: “Packed with references to the Aliens movies, including Power Loader battles and an intense APC escape scene, this is a game made by fans with the fans in mind.” Game Informer gave it 8.25/10: “If you’re a fan of Metroid, Aliens, or just solid handheld experiences, don’t let Infestation become forgotten as the 3DS wave washes over us.”