A friend of mine came with me into the demo and left saying it was awesome. He is a very casual fan of the movies, but kept saying that it made him want to go back and re-watch them all again. He had a lot of fun with the multiplayer – said, “it wasn’t as boring as COD matches and felt much more furious than other MP games he’s played” He liked it a lot.

It was reiterated a few times over that this is still an early build, so things can certainly change between now and release date – which is still targeted as fall 2012. I asked about some of the other forum questions, but a lot of it was still undecided, TBD or they were not at liberty to say, but that the feedback was always being listened to. Sometimes feature implementation comes down to what makes sense from a gameplay perspective. 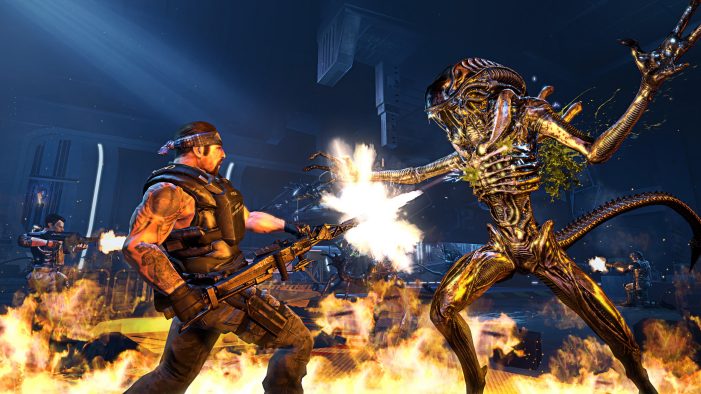 Ok, so that’s all the stuff I got from the 2nd round of the demo. Again, a big thanks to Sega and Gearbox for hooking me up and letting me skip ahead in the line. They are too numerous to name (and I forgot some of their names already) but EVERYONE was really friendly and happy to talk to me.

I was able to talk to the folks at the booth and got pics of the swag. Only facehugger and xeno scarves were being handed out. The hoodies were worn by GBX/Sega employees – same with the glow in the dark t-shirt. (thanks to Ikarop for posting my twitter pics)

I also had a chance to chat with some of the cosplayers – one, the smart gunner, told me it has taken him 3 years to get his costume/weapon built to spec. There was a third Marine there today – a female in a flight suit similar to Ferro. She had a ‘working’ motion tracker!

When I asked the smartgunner what he thought of the game, he got really excited. He said that he couldn’t be happier for the game and that he thought it was awesome. He said he was really glad that we’d finally get “a true Aliens game that didn’t suck.”

Other awesome highlights: I got to hang with Chris F and Adam F for a bit today – both are fantastic and gave me a chunk of their (very) valuable time. I mostly used this time to gush like a squealing fan-boy over the game and the details.

I got some pictures in the powerloader, which was a treat. That thing is so bad ass.

Oh, and I met Randy P. Mentioned that I was a long-time follower on the forums and told him both of his games at PAX were really impressive. He was really cool and seemed genuinely happy that I stopped him to say hi. I don’t think he recognized my handle, but I did get a picture with him.

So that’s it from a very busy PAX East day 2. Today was awesome and I can’t wait for round 3 tomorrow and the Panel sounds like it’s going to be a blast, too.