Over at Spawn.com, their Online Figure Feature has gone live this evening – it’s sort of a mini-site that covers the upcoming line of new Alien vs Predator action figures. The five figures including the Grid Alien, Celtic, Elder and Scar Predator will be released in line with the AvP movie in August. 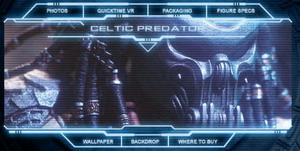 “In the new feature, you’ll have access to all the latest information on this series, including additional figure photography, specs, in-package artwork, QuickTime VRs and much more.”

It looks like they’ve gone to a lot of trouble to create this nice-looking website so it’s definitely worth checking out. Thanks to GL for the news.

on second thought, maybe the mask IS removable. hmm, we'll just have to wait and c. ps. the colonial marine hicks figure sux, it dont look very articulated and have like no accesories watsoever.

The Elder and Scar Predator rox!

Title: Re: Spawn Figure Feature Live
Post by: Blaze on Jul 19, 2004, 01:32:28 PM
McFarlen figures are usually $7-9 which is really a good deal.
Title: Re: Spawn Figure Feature Live
Post by: Hell Alien on Jul 19, 2004, 03:05:08 PM
J, man i feel very sorry for you bud. Its a shame that you have to wait that long. But its life, and if ya want i will make ya a special post when i see the movie to answer every ones of ya questions.   ;)    And something i wanna know about the figures, I heard that they were coming in July!!?? I taught it was august. Wich is it now. Im bit confused.
Title: Re: Spawn Figure Feature Live
Post by: Growler on Jul 19, 2004, 03:28:54 PM
to Hell Alien::  Spawn.com is saying the figures hit the stores in July.  Well, only 2 weeks left in July.  Hope you got enough in your piggy bank.  I don't know if Spawn.com is releasing them world wide for the shear fact the movie isn't being opened world wide in August.  Don't quote me on it, but you guys on the other side of the Atlantic (and Pacific) might have to purchase them strictly out of the U.S.  Unless the merchants in your part of the world aren't going to wait till the release of the movie in your local area to start putting these figures on the shelves.  You might want to check with Spawn.com and ask them via e-mail or whatever and see if the figures will be on sale in your areas this July/August.
Title: Re: Spawn Figure Feature Live
Post by: Hell Alien on Jul 19, 2004, 05:08:07 PM
Thanx Growler, I knew i heard that somewhere. And yes i might have enough in my lil alien bank. Eh eh. It will be a Hell of a collection there. Hope there will be more eventualy, like a dutch figure, some marines like hudson and vasquez ripley too, Hicks is out so... Anyway some ppl r not loving these collectables and not toys. Its a shame, they r so well done, of curse masters replicas r better but more expensive too. Anyway, we r all made different.
Text only | Text with Images