Predators had its world premiere last Wednesday in Austin, Texas. AvPGalaxy’s Mr. Domino was there to check out the event. You can view his report here and find out what happened and his thoughts on the movie. 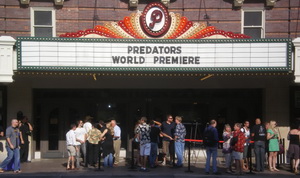 Thanks to Mr. Domino for talking the time to put together this report.

Royce covered himself in mud to hide his heat signature when he was running out of the fire and into the trees. It made perfect sense to me when we saw him run in and out frame, smacking Mr. Black in the face.
Title: Re: Predators Premiere Report
Post by: Starkiller on Jul 15, 2010, 12:10:56 AM
i thought the movie was good, alot better than the avp's, the cast was great, the story was cool, the score was great, needed alot more new material tho, however it went well with the film, esp the nod to the alien theme, all in all a good movie but certainly not great.

the bad points to the movie was the opening credits, could have been longer and more epic, after all its been 20years since a pred movie, the predators in the movie went predators, they didnt have the physique, the 'movements'. the vision mode was terrible and felt robotic, like terminator, i prefered 'the wolf' from avp-r, ian whyte was needed, i liked the movie, but the preds just died way too easy and they didnt act, feel, behave like preds. i just wish they could stick 2 the orginal 'stan winston' design. hopefully the sequel will have ian whyte potray the predator again, love that guy! and hopefully the vision mode will go back to the orginal and actually feel 'alien' and all the sounds, movements and gestures will return. i rate the movie 6/10. could have been 9.
Text only | Text with Images