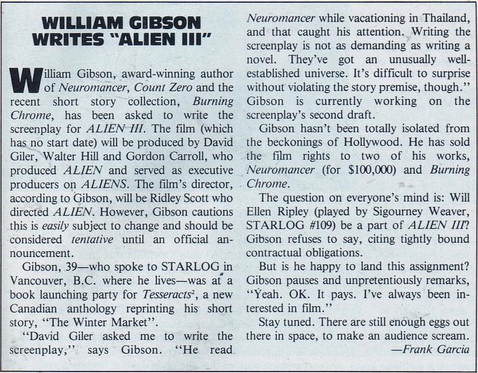 - Oct 29, 2020, 11:04:56 AM
Got the impression that the Freedomnauts ended up blending human dna with the genetic material after that first attempt (and that's how they got the small spores). Fox was very keen on having the experiments continue after being informed of the rapid growth. The next time we see the lab they have the small eggs in a nutrient solution. (i.e. they followed orders and kept experimenting).

I also remember reading about Ridley being attached but
Ridley said around the release of Prometheus that he "was never invited back".

Quote from: HuDaFuK on Oct 29, 2020, 10:58:32 AM
From memory, the script specifically states the Star-Commies get into messing around with the DNA of their samples, but the Freedomnauts are never said to do anything other than look at it. The entirely new reproductive cycle comes from nowhere.

I think you're right actually. But this is one of those things were a 3rd draft and some more refinement was really needed. It should have been the other way around.

Quote from: skhellter on Oct 29, 2020, 10:46:31 AMehhh the neomorph like "new beast" was very specifically the product of experimentation.

Not really. They scrape the sample from Bishop and study it. Everything else it does on its own.

From memory, the script specifically states the Star-Commies get into messing around with the DNA of their samples, but the Freedomnauts are never said to do anything other than look at it. The entirely new reproductive cycle comes from nowhere.

Always preferred Twohy's myself, although Gibson's second draft is definitely next in line.

I think Renny Harlin originally came on to do this script.

Was anyone ever attached to direct this thing anyway?

- Oct 29, 2020, 10:50:40 AM
The second iteration of Gibson's is my favourite too. I used to really dislike the first one, but the second that all these adaptations are based on is much more restrained and better for it. It still needed another draft or two, but I do genuinely like it. The whole ancient weapon and programmable angle was really interesting to me, and I think worked really well to explain the whole new beast variation. It was all there for justification.

the actual alien itself was still of the "egg, facehugger, chestburster" variety. And was still stronger than the new beasts.

I liked how Gibson defined the alien genetic material as being almost like a nanomachine, with some limited adaptive abilities that allowed it to gain a new form. I got the impression that gibson wanted to imply a low level of artificial intelligence in the thing... and it probably became the "new beast" as a last resort thing. Maybe the "new beast" would end up eggmorphing people and that would then bring about the old regular "perfect organism".

I was kinda ok with it. Lots of ways to "fanwank it" into making some sort of sense.

Best of the abandoned scripts at any rate.

- Oct 29, 2020, 10:42:22 AM
Yeah I never liked the airborne pathogen angle either.  In fact I was never a fan of the Gibson scripts - until I read the comic and listened to the audio drama.  The whole thing is still very rough, but enjoyable enough.

- Oct 29, 2020, 10:14:50 AM
I had less of an issue with the egg growing than I did with the Alien suddenly becoming an airborne pathogen version of the Thing when it didn't show any evidence of that in the first two movies.

Don't get me wrong, I dig it as an alternative but I'm glad they didn't go with it.

But i had some fun with the audible thing. Also liked how they added extra dialogue for Bishop/Hicks.

I can appreciate how Gibson was trying to flesh out the universe at large while also bringing things closer to the tone of the first film.

Did Dirk Maggs ever talk about designing the audio for the "New Beast"? Some really good sounds for it.


The egg in Bishop is an absolutely bizarre, stupid idea but i guess you could (fanwank it) justify it by having his insides reacting to whatever "eggmorphing fluid" the Queen's tail was coated in after leaving the egg chamber. And the synthetics in the Alien universe have some "biological atributes" like david growing his hair and eating in Prometheus, etc... Still, it would probably look like a considerably weaker, smaller version of the standard egg.

- Oct 05, 2020, 11:57:10 AM
The scene in the Twohy draft where the entire prison population gets sucked out into space in less than a page would look pretty funny illustrated.