Quote from: Pu$$yFace on Feb 08, 2021, 05:03:57 AM
Most underrated sequel cinematically, in general, and the most underrated Predator movie.  It's a slight notch below the OG.  Def better than everything else in the franchise, by far.

- Feb 08, 2021, 05:03:57 AM
Most underrated sequel cinematically, in general, and the most underrated Predator movie.  It's a slight notch below the OG.  Def better than everything else in the franchise, by far.

Something else. Hopkins said he did some full color paintings featuring the Predator and Harrigan to help conceptualize it!

And so much this. After the interview I asked exactly that! Maybe just maybe in the Predator Archive book if we're lucky!

Quote from: Kradan on Jan 08, 2021, 06:13:30 PM
I believe, that in a world where Voodoo gets to talk to Stephen Hopkins, one day TheSailingRabbit will talk to Mark Rolston

Haha. I'm still holding out hope on getting there someday. But 2021 is not off to a good start for me booking guests so...

Quote from: Darkness on Jan 08, 2021, 06:49:26 PM
I think it's a testament to yourself that you managed to track down somebody as elusive as Hopkins. The thing with Predator 2, there just isn't a lot of info out there about it so it's great having something like this. It's a damn underrated sequel. People will moan that it doesn't have Arnie in it or it's set in a city but I like the contrast. It's by far my favourite Predator sequel.

Thanks, D. We really do try with this! And completely agree on Predator 2 getting attention. I'd go as far as to say Predator over all doesn't really get that kind of attention it deserves.

QuoteClears up the thing about the 4K. I thought it was going to be a new Blu-ray set with lots of new features. Never expected Fox were going re-release the film back to cinemas.

No, that was a surprise to me too! Hopefully we'll get that release at some point when normalcy returns.

I've not come across it myself either. Be worth having a look into, I think!

QuoteDid he say anything about Anna? Did she have anymore scenes?

I asked him about it after the fact - not sure how neither of us thought to ask this one!

QuoteI  remember there was a video of her that was supposed to have been shown by Keyes, but no memory of filming a scene around it.

Quote from: 426Buddy on Jan 09, 2021, 12:56:51 PM
Really this is just beyond amazing! There are so many nuggets of P2 gold in this interview, it's crazy. You guys and Hopkins have really provided a boon for predator fans with this.

I'm still laughing after he said the warehouse scene did copy aliens, just a great answer and humble. So much great info here.

Thank you Hicks and Voodoo, this is really next level stuff.

He really was such a chill guy. And so many people are commenting on it. I'm glad everyone seems to be enjoying this episode!

Wonderful interview! You guys are doing a fantastic job with this site.
I am grateful for avpgalaxy! the best fansite ever!

I will look forward to this if it ever happens.

Oh man, I'd love to speak to the Thomas Brothers. But they've absolutely no presence online, or contact. We'd have to rely on networking there. But hopefully some day...

Quote from: Marc505 on Jan 11, 2021, 09:49:48 PM
One thing I would say though, I still would like to see those shards of frames that were cut. Even if they added barely a second or two per scene, that extra hint of gore or the Predator at work would have been a treat.

I'd love to see that NC17 cut too! It was something I suggested to Fox when we had active contact with the guys running the license over there. Whether or not they found anything, I don't know. It just depends if that original footage still exists.

- Jan 18, 2021, 11:32:53 AM
First up a big thank you to Corporal Hicks and Voodoo Magic for this solid and very entertaining interview. Cleared a lot of doubts on Predator 2. Hope to see more of good stuff like this in the future. Keep up the good work!!

FYI, for any comic nerds out there, I recently came across a sword and sorcery series called "spell jammer," and if you can find issue 4 which came out December 1990, there's a killer Predator 2 movie promo that you can tear out, it's double-sided and probably around 8x14 inches, with the movie poster advertisement on one side and a predator 2 weapons loadout on the other. I paid $1.50 for the comic.
Cheers

I'm familiar with the movie promo insert but not being in Spell Jammer #4. I ordered a copy yesterday just in case it's different from the ones I've seen.  And you're right, it was cheap! Thanks for sharing this info H-K!  You da man!! %uD83D%uDC4D

Yep, this was same insert you could find in a few magazines, but more miniature due to the size of a comic. Smaller, yet still just as cool! Thanks again for the tip H-K! 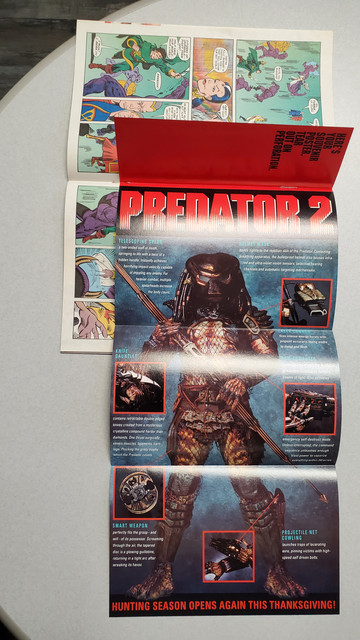