Fox are surprisingly making the most out of this upcoming Predator CE DVD by now having a Sweepstakes for the set. The competition finishes at the end of September and is only open to US residents. They’ve even produced this nice-looking graphic for it: 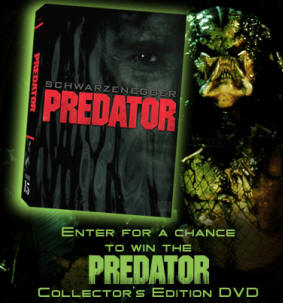 When the winners are announced on October 11th 2004, one lucky winner will get a DVD Player with a copy of the DVD and 25 other winners will get one copy of Predator CE. So it’s worth submitting your details because you never know… you may even strike lucky.