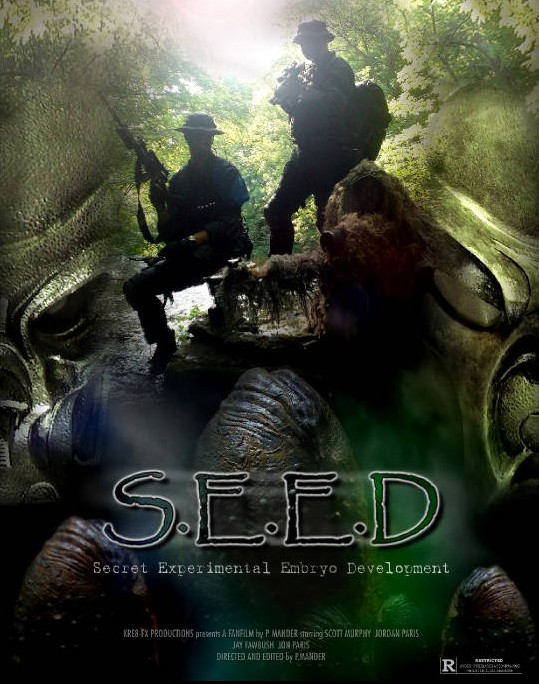 In 1947, Roswell New Mexico was the scene of what most believe to be a UFO crash zone, but this site like many others were quickly covered up and shrouded in secrecy by an unknown non-government organization. Many years later, the massive and powerful Yutani Corporation is investing billions in new space program development and the organization of a highly trained Special Ops team to protect their secret interests. Rumors surrounding their mysterious investments speak of the ultimate weapon that would allow the military to dominate any opposition. 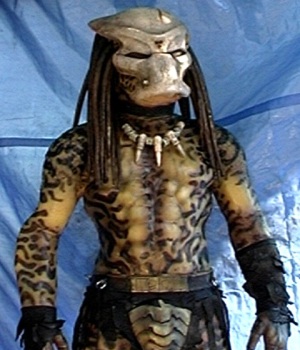 S.E.E.D. (which stands for Secret Experimental Embryo Development) is an Alien vs Predator fan film from artist and costume designer Pete Mander. The fan film had its premiere in Toronto, Canada on March 11, 2006 and was released to the public thereafter. AvPGalaxy was offline at that point so I recall Alien Experience was the place to be for all things S.E.E.D. news and there was tremendous hype for it. Peter Mander spent two years working on the project and it was basically made to show off his animatronics and costumes. S.E.E.D. had a budget of around $14,000 and its final length clocked in at 27 minutes.

As we know from the Alien series, Weyland-Yutani is the evil company that seeks to retrieve a Xenomorph for their weapons division. The story in S.E.E.D. tells us how the Yutani Corporation first became involved with Weyland Industries. The fan film begins with a Predator spaceship crash landing in a remote forest and multiple Xenomorphs escape. The film is shown from the perspective of Major Jordan Paris and Captain Scott Murphy, both SWAT operatives, who begin chasing a Predator.

They both are recruited into Black Ops and Spencer, the CEO of the Yutani Corporation, reveals that the 1947 Roswell crash was actually a Predator spaceship and they used the infamous alien autopsy video to cover it up. He says the Predators have visited our planet many times and each time, a special team of operatives was sent to investigate but none of them ever returned alive. Spencer reveals that these alien creatures have crashed in a forest and have sent a sniper, Jordan’s brother, to watch the creatures. So Paris and Murphy are sent on a search and rescue mission. They find the sniper alive but quickly find they are in a massive battle between Aliens and Predators.

Oh, dear, where do I start reviewing this fan film? There’s so many problems with S.E.E.D.. It’s no secret that there were numerous problems throughout production. According to director Pete Mander, 60% of the script wasn’t filmed so they ended up only shooting a small part of what they wanted. He ran out of time and money and essentially had trouble finding people with the same motivation to make the movie. Real-life commitments got in the way of everybody involved. As a result, a lot of the story is completely lost. They supposedly had enough in the script to film a two hour movie. Even at 27 minutes long, you’ll still come out of it scratching your head.

The other main problem is that none of the cast and crew had any kind of experience in acting or filmmaking so they learnt as they went on. Bad audio, bad camerawork, bad lighting. This brings me onto the single biggest problem – the editing. In the climax of the movie when everything kicks off between the Xenomorphs and Predators, the editing is so chaotic you can’t tell what’s going on. I couldn’t even tell you how many Predators and Aliens were in this film because there were that many quick cuts and battles going on.

The main highpoint of the film, and the reason S.E.E.D. was made, is the fantastic Alien and Predator costumes and animatronics that Pete Mander crafted from scratch. Again, I don’t know how many he created as there were more creatures in S.E.E.D. than any other fan film we’ve seen in the community. I think there were about seven Predators with completely unique features. We have “Blades” who has two blades jutting from its mask – seems like a precursor to the Tracker Predator in 2010’s Predators. “Scanner” has the weird mouth while “Blinded” was in the water battle. “Albino” was the only unmasked Predator and his skin was white.

“Badblood” was the one with the dark red mask and was a rogue Predator. That’s another thing that is completely unexplained in the fan film. Where did the rogue come from? Why was he attacking the other Predators? Badbloods have been in the comics for a long time but this was actually the first time we see Predator vs Predator action in a film, until Predators was released. Another first for the media was the introduction of a female Predator who has a more feminine mask and breastplates. It’s a “blink and you’ll miss it” moment as she appears for only a few seconds. I’m not a fan of female Predators but I’ll give Pete Mander full credit for throwing it in there. There are a few visual effects in S.E.E.D. such as the Predators’ shoulder cannons and vision modes. It works, I guess but it’s very outdated from what we saw in the Predator movies. 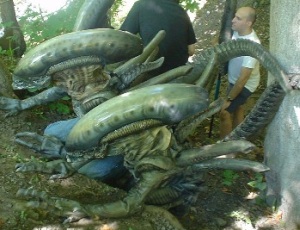 The Xenomorphs are a mixture of guys in suits and animatronics, all built from scratch. The quality is exceptional and this guy could give the likes of Amalgamated Dynamics a run for their money. Pete also created an animatronic that was a cross between an Alien Queen and an Alien Warrior but unfortunately never got the chance to use it. There are also some very quick glimpses of Alien Eggs and a Chestburster. I will say one of the highlights for me is the battle between the Predator and Xenomorph in the waterfall. Visually, it’s probably the most impressive scene in the whole fan film.

There’s no denying that Pete Mander is fantastic when it comes to sculpting and making costumes but I wish somebody else with movie-making experience took charge of production while he worked in the background. It’s a bit like asking the Strause Brothers or ADI (who both have backgrounds in effects but have no clue about directing) to make a movie. The finished result is always going to be a mess. Despite the sketchy story, acting, and editing, I still do love seeing the creatures on screen and for me, it does a lot to salvage S.E.E.D..