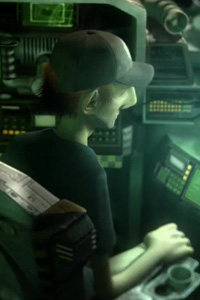 It was all about a Weyland-Yutani guard on a ship received a Happy New Year greetings. A power loss on the ship results with the ship losing gravity. The guard repaired the ship’s mainframe, restoring the power. He later pressed a “coffee” button. As the guard began to watch TV something that appears to be an Alien came to the cockpit. It is implied later that the Alien is in fact a robot and its inner jaw functions as a coffee machine. 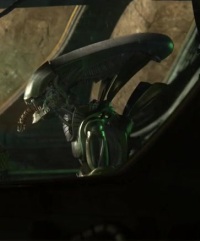 E.T.A. is an animated short film that was first released in March 2008 from the mind of Danish filmmaker Henrik B. Clausen via Junkworks. He has a background in animation and making short films and commercials. The film is just over four minutes long but took around 4 years to make – production wasn’t without its problems. E.T.A. went through many scene changes and the team lost a lot of motivation to finish it which is why production took so long.

The story is about a space pilot called Marvin on a Weyland-Yutani ship on his way home. He receives a Happy New Year greeting on his terminal and the ship loses power which causes it to lose gravity. Marvin hits the terminal which brings the spaceship back online and he orders a cup of coffee.  We then cut to a xenomorph making its way to Marvin as he watches TV. It’s revealed to be a mechanical xenomorph that produces coffee from its mouth.

E.T.A. isn’t really a fan film in the sense we’re used to – it’s more of a short parody of the Alien series. But the animation is absolutely superb – the same level as what you’d see in a Pixar movie. The production values are amazing with great lighting and shadows. There are lots of great nods to the Alien franchise. The music is suitably creepy at the beginning but soon builds up as the mechanical xenomorph approaches. The sound effects are really well done. There’s actually no dialogue in the film other than when Marvin turns on the TV.

Another big positive was the animated short was produced in 720p HD which was rare at the time. The likes of YouTube didn’t add HD to their videos until late 2008. At only four minutes long, the only downside of the film is that it had to end so soon. But because this is a funny parody, that’s completely understandable. It’ll never happen but E.T.A. does make me want a Pixar-style animated movie or TV series based around the Alien franchise. Fox came close to an animated cartoon series in the early 90’s but never went through with the project (see Operation: Aliens).

Indeed, E.T.A. is the only fan-made animated film we’ve seen in these franchises. Aliens and Predator have popped up in other animated cartoons but none of them have the same level of animation as we have here. Everything about this short film is absolutely top-notch and its really long production length definitely paid off in the end.