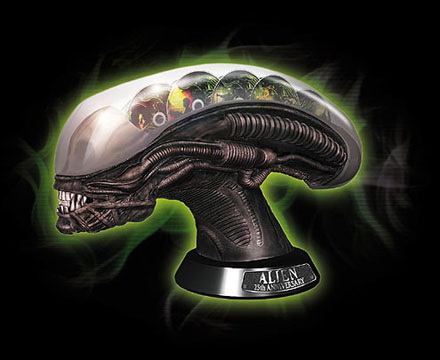 The Alien Quadrilogy Alien Head DVD Set was first released in Japan in 2004. It was later released in the UK in November 2005. It has since been discontinued but you can still find it on specialised sties and eBay. What’s special about the packaging is that the discs are held in the dome of an alien’s head. The head is made of a heavy, hard plastic that has an oddly soft feel to it.

The paint is airbrushed on, with amazing attention paid to eye and jaw detail. The plastic itself has a rough feel to it, and if you look closely, you’ll see a small sparkle of some other material built in. The plastic cap that comes off is translucent, and hides the DVDs when they are placed within. You can see the eyesockets of the alien skull through the cap, which adds to the frightening aspect of this head. The rear of the head is also beautifully done, and tapers off to a dull point. The discs inside the package are identical to the ones in the original Alien Quadrilogy packaging.