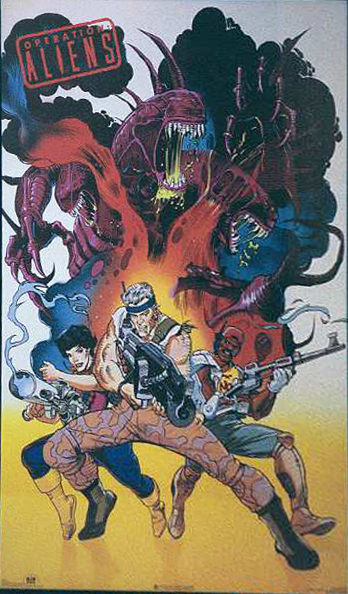 Operation: Aliens was a proposed Saturday-morning cartoon series based on James Cameron’s Aliens movie. Around 1992, 20th Century Fox greenlit the series to be shown on its network as a way to market Alien 3 to a younger audience. The cartoon started production through a mystery Korean animation studio but it’s unknown how far they got with it or whether they even finished the first episode or not. No video footage has ever been found though some stills from the cartoon were posted on a now defunct website for Korean animation. Operation: Aliens was rumoured to be released in the Fall of 1992 to follow the original X-Men animated series on Saturday mornings. It’s unknown why Fox decided against releasing it.

When Alien 3 debuted in May 1992, its box office takings were poor and its negative critical reception could have contributed to the show’s demise. It’s also possible that Fox realised that Facehuggers and Chestbursters just weren’t suitable for a young audience. Either way, Fox abandoned its plans for Operation: Aliens. By this point, a whole action figure line from Kenner and various merchandise had already been produced for the cartoon. Some of Kenner’s figures shipped to stores a little early under the “Operation: Aliens” logo but Kenner later changed the logo to simply “Aliens”. It was too late to change the name for the rest of the merchandise such as posters, board games, T-shirts, stationary etc which kept the “Operation: Aliens” branding.

The plot of the cartoon remains a mystery but Kenner released some mini-comics with their action figures which are probably based on the show. The pilot would have featured Ellen Ripley, Bishop, Apone, Hicks and Drake killing the xenomorphs in the galaxy. The stories expand upon the notion that when a Facehugger infects an organism, it borrows traits from its host like the dog in Alien 3. Kenner introduced new xenomorph hybrids including ones based on a Gorilla, Rhino, Mantis, Scorpion and a Snake.