Eventually, we were greeted by the sight of Waterston, Danny McBride, Demián Bichir and Jussie Smollett. McBride seemed either reserved or curiously shy, though all appeared to be in good spirits.

Waterston recalled her first memory of the films being of a friend’s older brother calling them over to watch the notorious chestburster scene when she was around ten years of age. She had to wait until nineteen or twenty before watching the films, because it left her too traumatised to try before then. The first day the cast turned up to film on the sets, they all exchanged looks with one another because the experience was so surreal and they marvelled at how real the spaceship interior seemed, with fully working controls.

Smollett recalled his scariest moment was at seeing how realistic his own replica dummy was, right down to individual body hair follicles. Everyone had one of these made up for them.

What was the one thing people should know about their characters or the film, before going to watch it?

Asked if they took anything from the set, McBride admitted to stealing a T-shirt, while Waterston said she had been given a few things and “got some pretty cool space boots”.

McBride joked that Fassbender managed to get a real Alien.

Following this, a preview session of the new soundtrack had been officially scheduled, though was replaced by a special arrangement of music inspired by the entire series, featuring an amusingly effective lead-in sting of, “Get away from her, you bitch!”

At this point, we had to retreat to the lower levels to view a special array of props from the new film. For those wondering, there was no memorabilia from earlier films to be found. Not at the London event, at least. It was pretty much blanket coverage of ‘Covenant‘, which is completely understandable, though it would have been nice to see the rest of the films also being represented, considering the spirit of the day’s festivities. 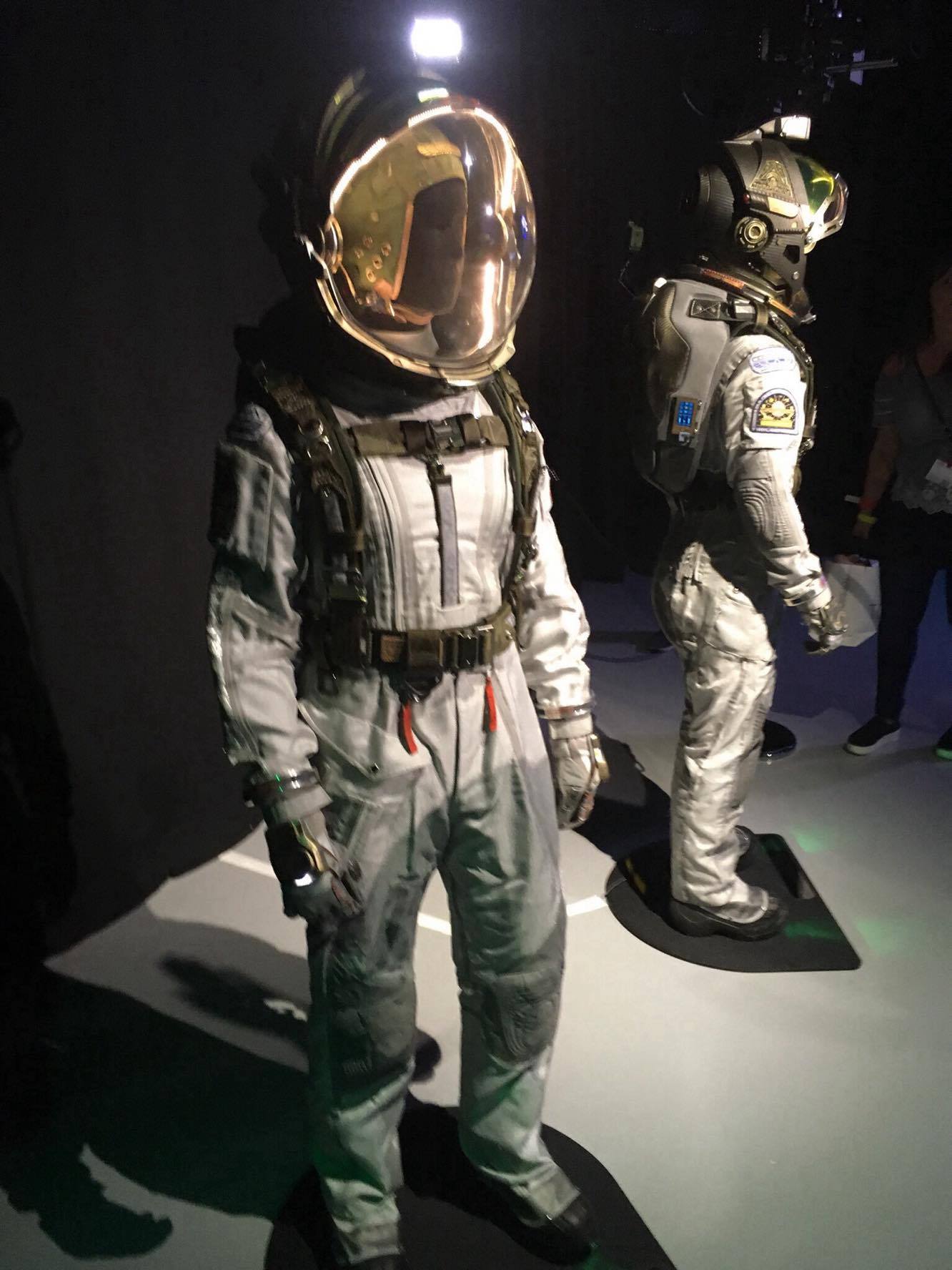 Downstairs, a special room had been set aside for displaying two examples of either spacesuits or sealed, high-altitude flight suits. There was no official indication as to which, but since they each had a small cameras on a mechanical arm, just over the shoulder, my guess was that these are simply meant to be alternative spacesuit designs to the one on the upper level. These, too, also had small functioning computer displays and the helmets were inspired by those of old Russian cosmonaut and MiG pilots. The zipper down the front serves a purely artistic purpose, to break up the otherwise featureless style.

These designs were a lot less bulky than the first was and reminded me of spacesuits from the 1950s. An actor would certainly be able to move around easier in them, though, conversely, an Alien would be able to tear one open with ease.

Two of the new hypersleep chambers were also on show. One vertical and the other laying horizontal. These also had small working computer displays. I began to notice that all these displays seem to have the same colour scheme of light-blue against black. 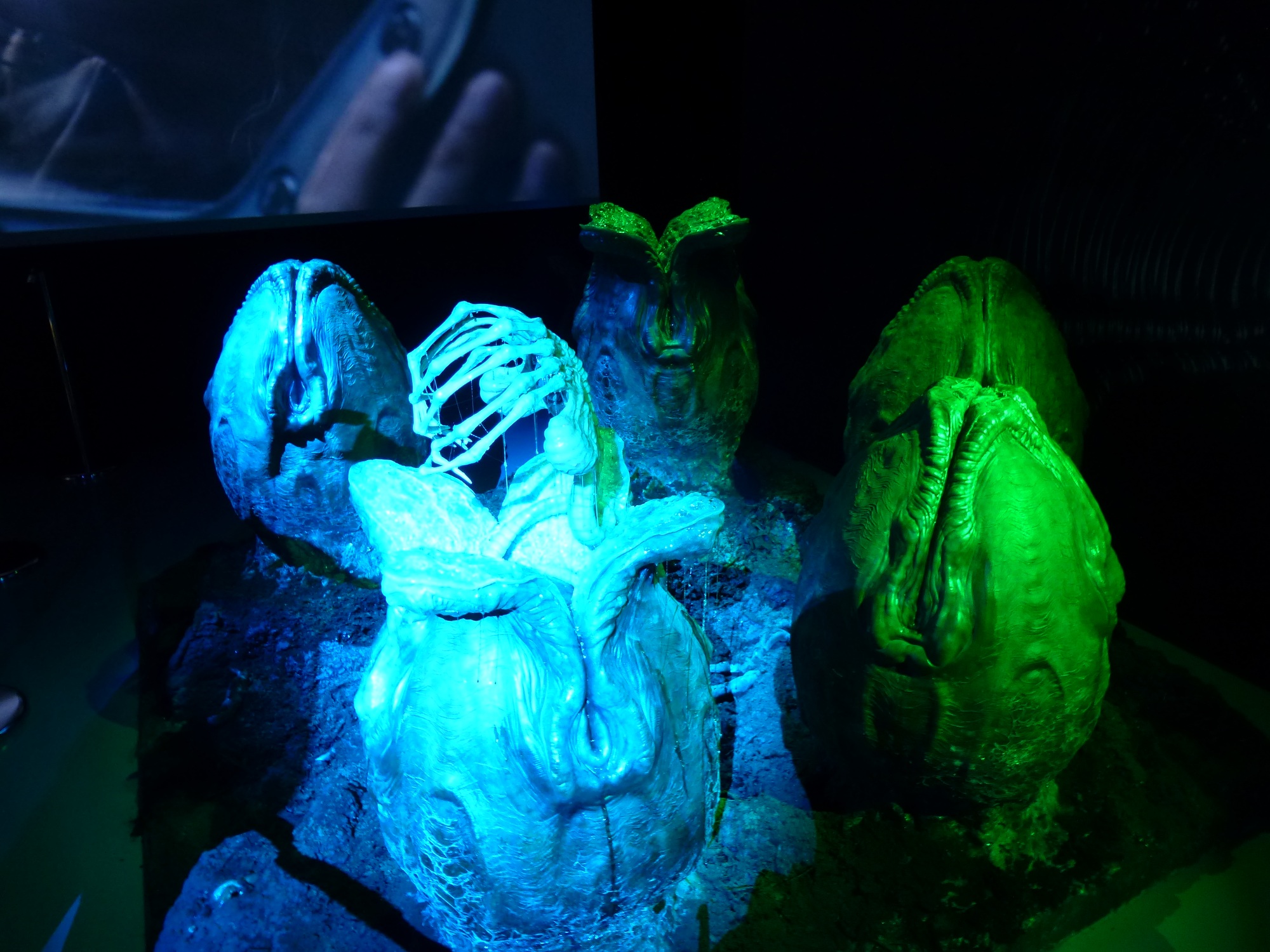 The last display was of four eggs in the new style, complete with leaping facehugger (also of the new, more skeletal-looking type). Some early reports erroneously described them as having Giger’s original vaginal-style arrangement on the top, but I can confirm they repeat the traditional four-way, criss-cross petal design. The ‘lips’ are thicker than those on the original eggs and, if the display is indicative of what we see in the film, they seem to be buried a little deeper into the ground they’re resting upon, which makes them look like huge versions of the fungal spore pods shown in early advertising (most likely on purpose). They also possess the roots we’re familiar with, pushed directly into the soil, making them look a little more plant-like.

The new facehugger does seem to share a superficial likeness to the unused ‘Superfacehugger’ design of the third film. While it isn’t exoskeletal, the skin is pulled tightly over the underlying skeletal structure, giving it a visual impression of representing decay. I expect it to look a more evil than most when latched onto some poor unfortunate victim.

After this, we were fortunate enough to each receive a small bag of free promotional items. I had been expecting, at most, a poster or free pen, but was pleasantly surprised to find the contents a lot more substantial. Mine included a special facehugger-themed bottle-opener, which I later found out were in very limited supply. A worthy item if you can find them! A baseball cap with cosmetic weathering was a really nice touch. Very Nostromo-esque! A full run-down of everything included was shown in my final broadcast of the day.

Soon after this, we were bussed out to another location for a showing of ‘Prometheus‘, a special feature which bridges it to ‘Covenant‘ (detailing what transpired between Shaw and David 8) and preview of some scenes from the new film (which featured some music from the original film’s Jerry Goldsmith score, which gave me a smile). A special introduction by Ridley Scott was aired before these and, whatever one’s view of ‘Prometheus‘, viewing any of the movies in the company of other fans is always a good experience. Especially when doing so on a big screen with a proper cinematic sound system.

I’ve largely been in wait-and-see mode for ‘Covenant‘. After watching this preview, I feel a lot more comfortable and optimistic about what we could receive. The way the characters interacted and responded to events felt right. Without giving away important details, when things got hectic, it mirrored many of the factors which contributed to making Lambert’s demise in the original so memorable.

When protocol falls down, people are out of their depth and confusion rules, that can be scary, tension-filled stuff and that’s what we were shown here. Just the right balance seemed to be maintained and, unlike certain moments in ‘Prometheus‘, characters don’t find themselves in that situation through incompetence, but through circumstance. They do what they can and simply find themselves running out of options.

The only flaw was in some of the creature CGI effects, which weren’t as convincing as they need to be (and which I sincerely hope will be improved for final release). This, however, was easily made up for in the behaviour and movement, which gave things a very believable overtone and added to the rising sense of panic.

In closing, we at Alien vs Predator Galaxy would like to thank Conor O’Sullivan, Trischa Gamus, Chris Castelonia and the rest of the team at Fox for this exclusive insight to the forthcoming ‘Alien: Covenant‘. An enlightening and fun day was had by all and, if this was any indication, next year’s Alien Day looks like it could have some intriguing new surprises waiting to hatch out for us.

Corporal Hicks here! I just wanted to take the time to thanks both Xenomorphine and HuDaFuk for heading down, taking part, writing this article and providing all these pictures. You can also see some of Xenomorphine’s livecasts here!