After William Gibson left Alien 3, Eric Red stepped in to provide a single draft. It wasn’t a rewrite of Gibson’s but Red took some of Gibson’s concept of modifying the Aliens at a genetic level and using them as a biological weapon. Red’s draft was also set on a space station (called North Star but later has an inexplicable change of name to Sulaco Station) where the military experiment with Alien genetic material.

Gibson’s previous drafts briefly talked about the Alien DNA being able to assimilate other DNA but Red’s took it a completely new level. Red places a lot of attention around the versatility of the Alien DNA and it’s ability to “assimilate” other matter as explained in the script:

“This organism, on a cellular, even a molecular level, is a purely and totally predatory.  We have never encountered an organism that had its characteristics…or its potential.  To survive, this cell attacks, and assimilates the cells of whatever it encounters.  In this manner it takes on the form of what it kills.  But this is what is most interesting…Gentlemen, I put to you that this organism, this cell, can assimilate not only with organic matter, but with inorganic matter.”

If you think this sounds more like something out of John Carpenters The Thing than Alien, you wouldn’t be alone. Red even seems to want to make you see the connection based on the inclusion of his very own Alien Thing:

“Fifty humans have been turned into an Alien Thing.  They have fused together into one…thing.  It is a two story, moving, murderous ass of armour and flesh, eyeballs, and tongues, screaming mouths and jackhammer jaws in a huge, anamorphous blob of arms, legs, talons, hooks, snouts, and teeth.  There are the teeth…” 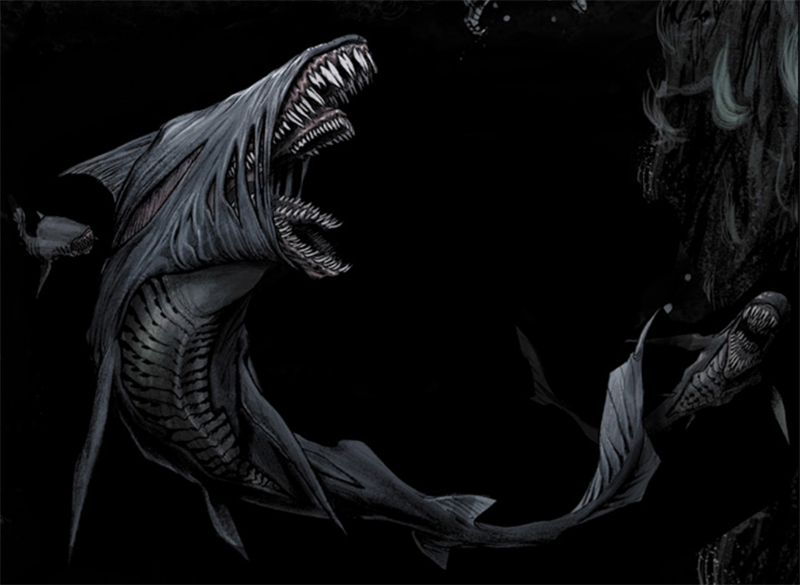 One of the many Alien-like creatures in Prometheus: Fire and Stone.

The Alien Thing would eventually begin to merge with the North Star space station itself, forming a giant Alien Thing floating in space:

“He looks out across the burning ruins of the endoskeleton and he sees the Alien Thing, the mass of fifty people, is now meshed with Alien Cattle and Alien Horses and many kinds of Alien Animals.  And more…It is melding to the steel beams and girders of the space station, all becoming one, living, moving, absorbing Alien.

The space station is reforming, metal and Alien and human flesh are fusing and reconstructing into a living biomechanoid blob, like a ten mile wide octopus as it’s beams and girders burst through the sides of the space station like gigantic tentacles of steel and slimy black armour and flesh.  The Alien thing floats in space…”

The ten mile wide Alien Thing is then promptly killed with a nuclear warhead.

Though Red’s script does still feature one sequence with facehuggers, the majority of the Aliens in the script come from when an Alien cocooned numerous scientists and military personal.

The script makes it sound like these characters are being eggmorphed, referring to the cocooned characters as being in a state of transformation but instead, fully formed adult Aliens soon emerge from the cocoons instead:

“John Smith winces as he is splatted with blood as an Alien leg erupts in bone and guts from one of the cocooned scientists.

A six foot tall, humanoid Alien is tearing its way out of one of the cocoons.  It’s armoured, slimy snout snaps at the air as it tries to extricate itself from the thick, tendrily cocoon substance.”

It’s not exactly the same as the way William Gibson’s New Beasts reproduced but it shares some similarities. The reason I bring up Eric Red’s draft is not due to the way the creatures reproduce, it’s to do with the concept of the Alien DNA that both Gibson and Red play with quite heavily. 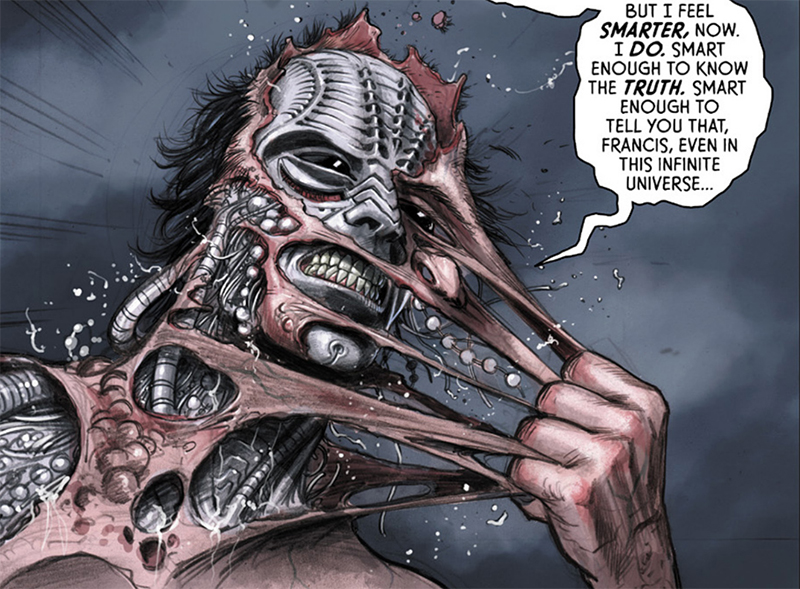 The synthetic Elden is transformed by the accelerant in Prometheus: Fire and Stone.

While the black goo/accelerant hasn’t been explained in any certain terms, both Prometheus and Dark Horse Comics’ Fire and Stone series have used it to transform creatures, androids and entire ecosystems into with many Alien-like qualities.

Though the origins of the black goo existed in Jon Spaihts’ drafts, it was a “scarab” that distributed the DNA of the last thing thing it bit rather than a blanket substance that transformed everything into an Alien-like entity. The accelerant seems to have more in common with concepts written by William Gibson and Eric Red.