The following deleted scenes were found in trailers, TV Spots and the early test screenings. The novelization is also used as a reference for some of these scenes.

Originally it was scripted and shot that Walter would use a handheld device to check the air quality. This was then shortened to a line of dialogue where Walter did a chemical analysis and told the shuttle crew it was safe to come out. This was also cut from the final film.

There is a similar sequence in Alan Dean Foster’s novelization but when we spoke to Mr Foster, he said that sequence wasn’t in the script he was provided and that was something he added to the novel himself which would indicate the addition to the filming script was later on during production.

In the various TV spots set to “Take Me Home, Country Roads,” there’s a very brief shot of what appears to be a record player (the record coloured blue or red) playing in a crew cabin. According to The Art Of book, it’s actually Jacob’s turntable and Daniels retrieves it when she is mourning him and looking over his various belongings. In the novelization, Daniels is listening to Nat King Cole’s Unforgettable on it.

Though the scenery through the window looks like Paradise and would suggest it’s on the lander, this is actually Daniels’ quarters above the Covenant which we can tell from the window design.

“Come with me… if you want to stay alive.” (Source: Test Screening)

When David comes to the aid of the Covenant landing party during the Neomorph attack, instead of telling the crew to “come with me,” there’s extended dialogue where he references slightly The Terminator and says “come with me… if you want to stay alive.”

The scene in which the Neomorph kills Rosenthal was slightly extended in earlier test screenings. The Neomorph slowly rises behind Rosenthal – similar to the way the Alien rises in front of Lambert in Alien – and instead of instantly killing her, there’s a pause where Rosenthal swears at the Neomorph before reaching for her weapon.

There is also a brief shot of Rosenthal screaming in the trailers that was including one of the test screenings during the death scene. It’s possible this was an incomplete effects shot, missing the Neomorph attacking her neck.

Unlike the other marketing videos, The Crossing was filmed as part of the actual film by Ridley Scott. In the October and December test screenings, the entire prologue video was included in the film as the flashback sequence. In the finished film, the flashback sequence was trimmed down to start with David arriving on Paradise and commencing his genocide of the Engineers.

The scene originally started with David’s severed head floating outside the Derelict ship. Shaw is furious with him and he eventually convinces her to bring his head back in and re-attach to it to his body as per the released footage.

According to Ridley Scott, the entire flashback sequence was nearly removed from the film but he insisted and some of the sequence was retained in the finished film. We’re unable to verify the following but according to someone who claimed to have attended a test screening in February, the scene was completely absent from that cut of the film.

Matt Hatton, one of the illustrators on Alien: Covenant, mentioned in an interview that there was a very short scene in an earlier script where David is showing Oram around the nursery and demonstrates that he is able to look over the Alien eggs without anything happening.

The December test screening featured slightly different editing during the end of the fight sequence between David and Walter. There was no shot of David reaching for the knife before Walter brought the rock down. The next that was seen of “Walter” was him running from the Citadel, without that lingering shot of him looking over his shoulder into the Citadel.

The novelization of Alien: Covenant featured a brief fight sequence between the Neomorph and the Alien that didn’t make it into the film. It starts similar to the scene as reported in the testing screenings (detailed below), with Daniels and Lope trying to shoot both creatures as they appear to ran towards the characters.

In the October screening, the fight scene was completely absent but there was still a brief sequence featuring both the Alien and the Neomorph. While Daniels and Lope are outside the Citadel, waiting for Tennessee to come down with the loading platform, the second Neomorph appears and charges them.

At the same time, the Alien appears out of the entrance to the Citadel and starts to run towards them from the opposite direction. Running for the shuttle, back to back, Daniels and Lope fire in opposite directions at the Alien and the Neomorph (as seen in the publicity still below). The Alien evades Lope’s shots but Daniels is able to eventually take down the Neomorph. 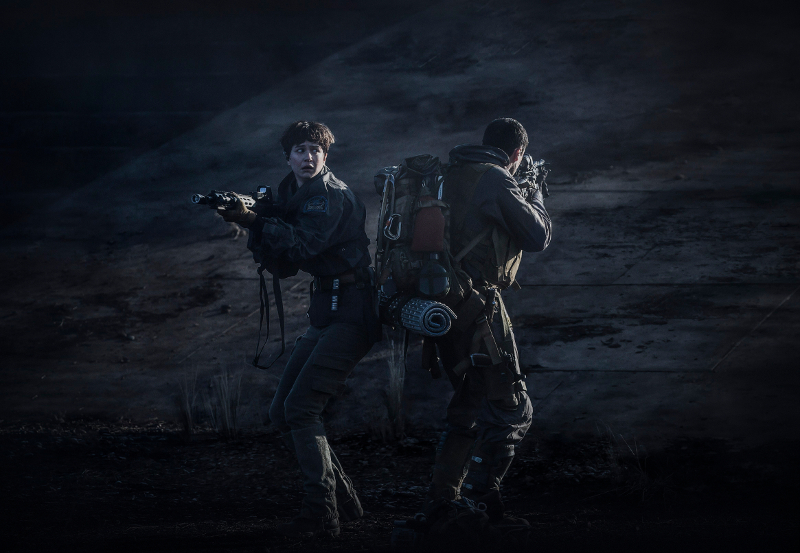 In the test screenings, the deaths of Ricks and Upworth were slightly extended and more graphic. There was a slightly longer cut of the Alien’s jaw retracting from Ricks’ face, focusing on his mutilated face. There was also a full body shot of the Alien leaping through the glass partition and landing on Upworth.

The second trailer featured several “money shots” of the Alien, including this brief shot of the Alien leaping down a red lit corridor aboard the Covenant. This scene wasn’t in the finished film. The sequence was very similar to the way in which Sir Ridley Scott had originally wanted the Alien to move when Dallas was in the vents in the original Alien. He was unable to achieve it with the technology at the time.

In the December test screenings, it plays out the same way but instead of the Aliens already in cryostorage, David regurgitates them as seen in the finished film. In both test screenings, he then proceeds down the colonist cryostorage area listening to Das Rheingold, doing a little jump where he playfully kicks his heels together.

In neither test screening did David record a message as Walter to transmit back to the Network. However, in the novelization he asks Mother to open a secure line back to Weyland-Yutani’s headquarters back on Earth.