Changing Hosts
In the comic adaptation of Alien 3, there’s a new scene at the beginning. The EEV crashes in the water on the planet and after Newt drowns in her cryotube, the embryonic chestburster crawls out of her mouth. It then crawls to Ripley (who is not in her cryotube) and enters her mouth to further develop. The comic adaptation was taken from an earlier script of the movie so this was most likely never filmed. 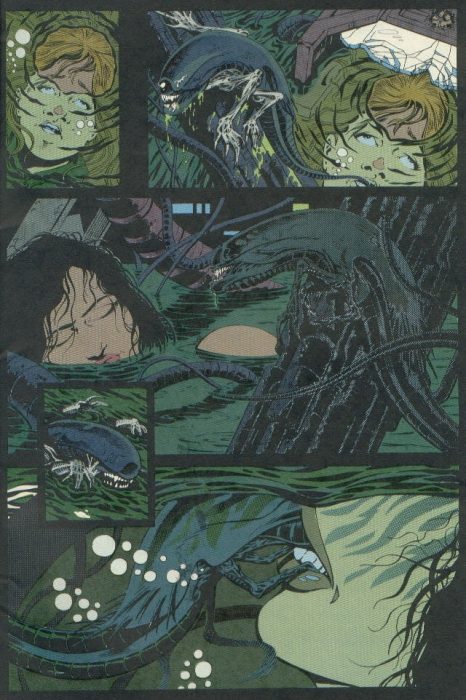 Ripley in Cryotube
From the DVD and trading cards, there is a shot of Ripley in her broken Cryotube that was not in the final film.

Super Facehugger
There’s some production stills on the DVD (and also on some trading cards) showing Murphy discovering the Facehugger that impregnated the ox. Frank suggests that it’s a jellyfish from the beach and Murphy tosses it away. We see a glimpse of the Super Facehugger in the Assembly cut but there’s no closeups of it like there is below and Frank never responds.

Basement Terror
In the scene where Ripley finds the alien in the basement, there was some footage taken out. The Alien hits Ripley’s pipe away and she falls back onto the ground. The Alien looks at Ripley and then bolts away. On card 27 of the Star Pics cardset, it says, “I startled it from its nest inside the infirmary air ducts. My only weapon, a heavy lead pipe, was useless. The Alien batted it out of my hand like a matchstick, then crept toward me. But it didn’t attack. I didn’t think it would. Not when I had its queen gestating inside me.” In the script, Ripley shows no fear when she finds the Alien at the rusty Hydro-Converter. She says, “You fucker,” and rams her pipe into the Alien, which reacts with a huge roar and cry. Ripley yells, “Come on fucker – kill me!” She hits the Alien again with her pipe and then the creature knocks it away. They stare at each other for a long frozen moment and then the Alien leaves. Ripley says, “Bastard.” 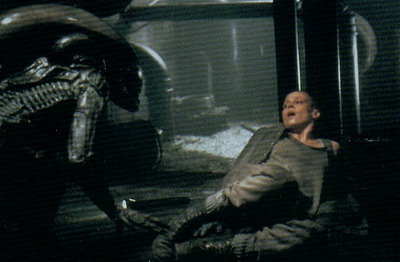 Dillon’s Ending
Originally, Dillon was not killed before the lead was poured and the company arrived before the alien was killed. Dillon helps Ripley to the top of the mold and she reaches down to help him up as seen in the theatrical release. The Alien is too close though so Dillon fights it with his axe. Morse pours the lead and Bishop II shouts, “Don’t do it! No!” The lead drives the Alien back into the mold and Dillon is able to get away. Morse says to Bishop II, “Eat shit — you miserable fucker!” Ripley notices that the company has arrived and shouts, “They’re here!” Dillon looks at Bishop II and Ripley grabs him saying, “Keep your promise!” Dillon asks, “You mean it?” Ripley replies, “Yes! I’ve got it inside me! Quit fucking around!” He puts his hands around her throat but he hesitates. She yells, “Do it!” Dillon says, “I can’t, I can’t do it.” He looks at her pleadingly and then his face turns to horror as the alien, which has reappeared in the mold, pulls him under the lead. It’s not known if any of this was filmed but it was in the script.