Cold Iron Studios has just launched a new free update right in time for some holiday Xeno slaying. We finally have new horde mode map! ‘Ruptured Cistern’ is set in the bowels of the Katanga refinery. The update also features limited time challenges to unlock exclusive winter themed weapon skins and marine cosmetics. The new stage features three floors with objectives to complete, with the multi-story map adding verticality that hasn’t really been in Horde Mode before. A trailer for the new map just dropped this morning:

Added to the official Aliens: Fireteam Elite website is a walkthrough of the new update, as well as full patch notes for the Ruptured Cistern Update 1.0.5.105618. Below are the details of all the new additions in the update:

“Welcome to Aliens: Fireteam Elite – Ruptured Cistern! This past year has been an incredible journey facing off against some of the most fearsome foes in the galaxy. Fireteams had to battle back hordes of Xenomorphs, eliminate scores of pathogen enemies, and even went toe-to-toe with a Pathogen Queen and lived to tell the tale.

Now it’s time for a new adventure – one with limited time rewards that delves deep into a place our marines know all too well. Reports are that there’s a leak in Katanga’s cisterns and we need a Fireteam to clear out the Xenomorphs and help with the repairs.”

NEW HORDE MODE MAP: RUPTURED CISTERN
There’s reports of leaks in Katanga’s cisterns and you and your Fireteam need to clear out the Xenomorphs and help with the repairs. Listen closely to Herrera’s directions and stay frosty! New waves of enemies might require you to move your operations to different levels of the multi-story complex.

Ruptured Cistern features limited time rewards, so drop in with your Fireteam before they are gone!

NEW LIMITED TIME EVENT REWARDS
As part of the release of Ruptured Cistern, we’ve added some limited time rewards that will only be available from now until January 17, 2023. These rewards will be replaced by permanent new rewards when the Limited Rewards Winter Event ends.

The following limited rewards are available for playing Ruptured Cistern before January 17, 2023:

This update marks the first time that limited opportunity rewards have been offered in the game! 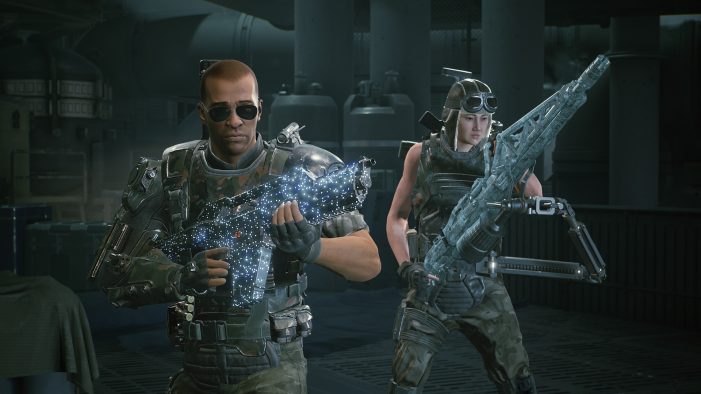 2023 is shaping up to be a big year for Aliens in the gaming space. Focus Entertainment is publishing their second Aliens game, Aliens: Dark Descent by developer Tindalos Interactive.

We also have a new VR focused Aliens action horror game from Survios and 20th Century Games. As if those were not enough (Ok no, we can never have too much of Aliens), there have also been some recent rumors of another Alien survival horror game in development, as well as a possible Alien: Isolation sequel pitch moving forward.

Of course, there’s likely still future things in store for Aliens: Fireteam Elite as well, with the patch notes mentioning: “These rewards will be replaced by permanent new rewards when the Limited Rewards Winter Event ends.”

With the 2022 Game Awards premiering this Thursday, we’ll have our eyes peeled for any potential new updates or announcements in the gaming space for our favorite franchises.