Following a hands-off demo of Tindalos Interactive’s upcoming Aliens: Dark Descent at GamesCom 2022, video game outlets are now starting to share their impressions. IGN uploaded a new video talking about their time with the demo. While the video doesn’t go into many new specifics, they do talk about how Dark Descent will also feature tower-defence like moments where your squad is required to hold-up in a location, welding doors shut and setting up turrets.

The video also talks about how you can recruit civilians such as engineers to improve your home base. IGN also compared the video to XCOM and Rogue, re-iterating that the world of Aliens: Dark Descent is a persistent world where you can revisit locations, and they will be in the same state you left them in with doors welding shut.

VG247 also shared a written impressions’ article that went into far more detail than IGN. Once again, VG247 made the comparison to XCOM, but said it went fair beyond being XCOM reskinned in Aliens.

The connection to the Firaxis strategy reboot is undeniable, obviously. A glance at the structure of the game, where you return to a hub base to manage soldiers with light RPG progression elements, or the pre-mission launch screen, makes it especially clear. It looks very similar. But, dig beyond that, particularly into the flow of combat and exploration in the strategy scenarios – and suddenly you see how Dark Descent is putting a distinctly different twist on the idea of a squad-based tactics game where you fend off powerful extraterrestrial creatures.

Most different is movement, which is both real-time and free-form, meaning you don’t have time to think about decision-making in the same way and movement takes place in full 3D as opposed to on a grid. This ramps up the pressure as your marines push through cramped corridors, making use of motion trackers (this is the Alien universe, after all) to keep track of where aliens are stalking. You can get jumped at any time, and there’s no turns or pausing to save you.

Keeping track of the map is important, because you’re not just on temporary ‘battle box’ maps that exist only for firefights. You’re exploring a wider area, a base that you’ll gradually uncover. It’s almost a bit like how a planet might work in a Metroid game, even though it’s a completely different sort of game – and you’ll even be able to uncover shortcuts across the planet to that end. Perspective-wise, the map, real-time movement and camera perspective almost makes it look like a spacebound Diablo, at least for a moment. 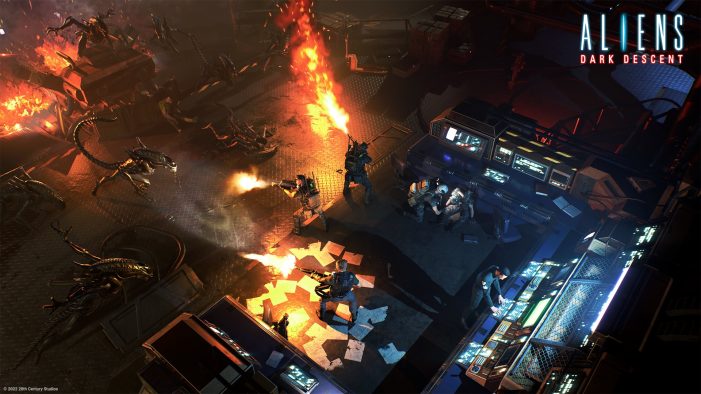 VG247 also elaborated on the combat, stating that while it wasn’t turned based, there was still an ability to slow time down enough to allow you to issue orders to your squad. Talking on the combat system they said:

There’s a lot of tactics to manage, too. You’ve got a squad of four that can be any of six different classes, each with abilities, weapons, and skills to consider. The two key stats to manage are health and stress – the former familiar and the latter a representation of the sanity of your marines. The more stressed they are, the worse their performance will be – topping out in outright panic, where a Marine is rendered practically useless.

Combat is real time, but you can slow things to a crawl, allowing orders to be issued. This also has the bonus of looking extremely cool. If you set up an ambush in a doorway, watching a hail of bullets slow-mo slam into a Xenomorph is extremely satisfying.

Thanks to Xenomorphing for the link! Make sure to keep a close eye on Alien vs. Predator Galaxy for the latest intel on Aliens: Dark Descent! You can follow us on Facebook, Twitter, Instagram and YouTube to get the latest on your social media walls. You can also join in with fellow Alien and Predator fans on our forums!