The release of the first campaign expansion for Aliens: Fireteam Elite is nearly upon us, and during today’s ‘Future Games Show’ livestream from European video game convention Gamescom, Cold Iron has given us a final trailer before the DLC’s release. In this completely new campaign continuing the story from the main game. our marines descend further into Engineer ruins to investigate a mysterious new pathogen outbreak. In the trailer we can see a massive new enemy, one which some fans have already speculated may appear: a Pathogen Queen.

“Aliens Fireteam Elite Pathogen focuses on a mysterious pathogen wreaking havoc on planet LV-895. Join your fellow marines in an all-new campaign that takes you into the heart of the Pathogen hive. Armed with new weapons and perks, it’s up to you to stop the Pathogen from taking over.”

The trailer also spotlighted three of the new eight weapons, two of them by expanded universe manufacturer Alphatech Hardware. The U1A2 GL conversion Hand Cannon, 61 Jaipur Submachine Gun, and the 2B1 Vajra Launcher should come in handy against this new mutated horde.

The premium DLC includes everything here:

Released for free alongside the Pathogen expansion will be a new extra-hard rogue-like inspired permadeath mode.

The Pathogen expansion drops next Tuesday on August 30th. Get on the ready line marines!

Cold Iron have shared an image to social media on the Pathogen Queen, giving us more details on the new foe. 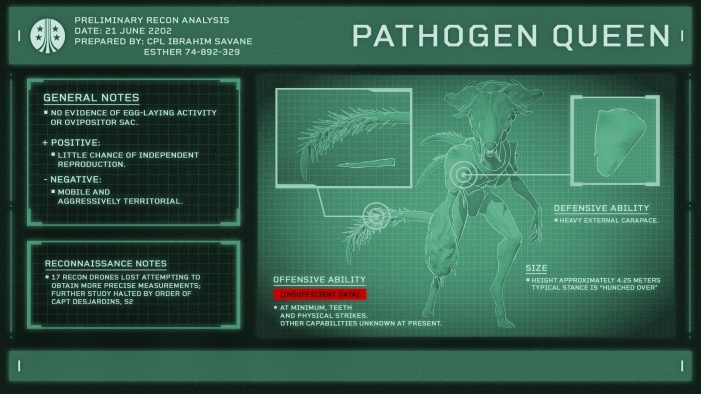