In another new interview following the release of the full trailer, Dan Trachtenberg spoke to Empire about a number of different aspects of Prey. Talking about casting Amber Midthunder, he spoke about his initial reaction to her audition.

“Primarily because she’s awesome! She read for the role in a hotel room, over Zoom or FaceTime and she really delivered. She transported me, immediately, despite the strange circumstances of her audition tape. She’s incredibly thoughtful, and relatable.

One of the things that I was excited to have was a period piece that didn’t put a wall up between the viewer and the characters. And not stuffy in a way that sometimes a period piece can get. Because it’s of a different time, you forget that people are still people and still felt the same feelings that we feel today, even way back when. And Amber immediately has that laser into our soul of, ‘oh, man, she feels how I feel’. Also, her parents have both been stunt performers in the past and I thought, ‘If they can do it, she can do it too’. And boy, did she! She trained so hard for this movie and really delivers on the action.”

Those of us out there who have been tracking the film closely will have seen actors cast as French fur trappers. When asked about Colonialism in Prey, Trachtenberg also confirmed that we would be seeing those fur trappers, and they have a large role to play in the film.

“I don’t want to speak too much of this. I want to make sure that I let the movie speak for itself. But yes, those are French fur trappers. Right. And, and they do play a significant role in the movie.”

Trachtenberg has also spoken in recent days about the inspiration for the portrayal and weaponry of the Feral Predator, as Prey’s Predator was known on set, but while talking to Empire he also confirmed that the Feral Predator is hunting without a very specific piece of technology this time around.

“The primary thing that I wanted to remove was the plasma caster. Just because it just felt like such an instant win button. I wanted to make sure that that the fight could be as exciting as possible without stripping it of its advantages. He doesn’t have all the tools that he has in the in newer movies. But he does have awesome new gadgets for people to see.”

Acknowledging the varying opinions on the quality of the films after the original Predator, Trachtenberg discussed his desire to head back to the “basic primal, instincts of that original Predator movie” stating that:

“I think all of the movies after the first one have all had really cool bits. I don’t know if there’s ever been one that on the whole was just a fabulous movie, I think they’ve all had varying degrees of awesome parts in them. So, it was very important to me that not only does this movie have to have awesome parts in it, but it also really needed to have a great story and something that was more universal even than in the original Predator.

I wanted to return to the basic primal, instincts of that original Predator movie. I think so many big swings have been taken since that one. And that was a part of this. ‘Okay, let’s do small again. But in a big way.’ And so, hopefully, for diehard fans of the franchise and all its incarnations, they feel like this movie speaking only to them. And for people who have never seen a Predator movie before, they’re like, ‘Oh, it’s a movie? It’s a real movie? I thought it was just a monster movie!’ It’s both!” 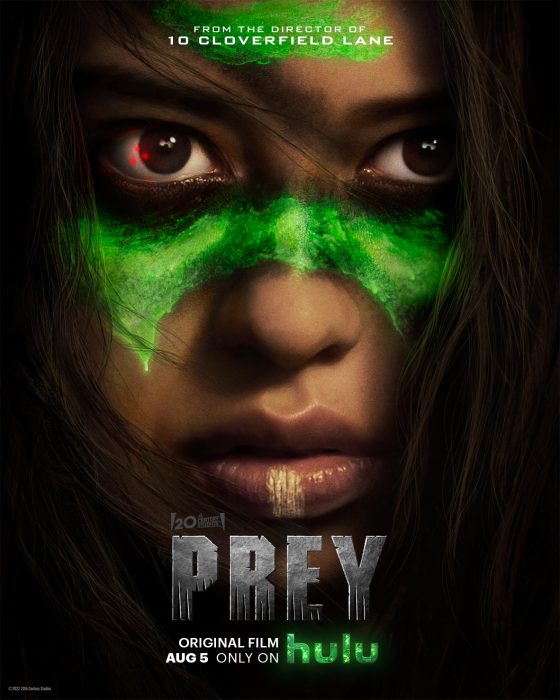 Make sure you head on over to Empire to read the entire piece. Trachtenberg also talks about how the look of Prey was inspired by Texan filmmaker Terrence Malick and Macbeth, easter eggs,  bringing a sense of suspense back to Predator,