While we don’t typically report on the cover reveals of Titan’s Alien or Predator novels, this is one we just can’t pass up! Alien vs. Predator Galaxy – and many within the fandom – have been quite regularly vocal about our opinions on Titan’s cover art, wanting a throwback to the quality of the old Bantam novels of the 90s. Titan has taken very few steps in the directions to improve that, but they’ve taken some.

Marco Turini’s cover artwork for Alien: Into Charybdis was one such step. And now we have this fantastic piece of artwork for Philippa Ballantine and Clara Carija’s upcoming Alien: Inferno’s Fall! Check it out below! 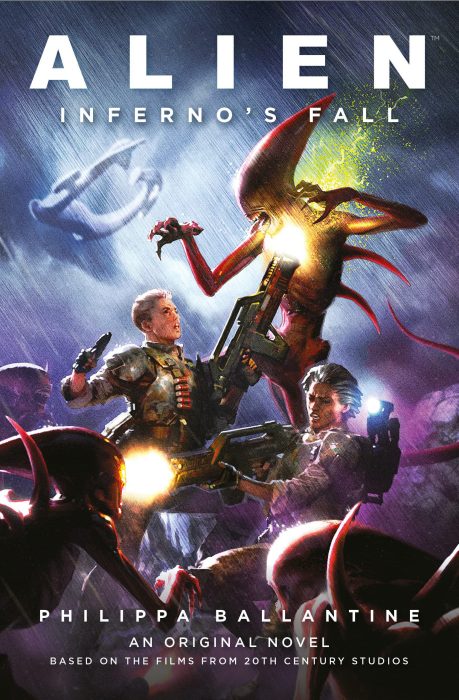 We don’t know the name of this artist, but it’s certainly a huge step forwards from Titan and one we hope to see continue with their other releases. Alien: Inferno’s Fall is currently slated for release on the 26th of July and is available for pre-order from Amazon (US/UK). I shall also include the synopsis below for those who can’t remember what Inferno’s Fall is about.

A gargantuan, horseshoe-shaped ship appears over the mining planet Shānmén unleashing a black rain of death that creates Xenomorph-like monsters worse than the darkest of nightmares.

As war breaks out among the colonies, a huge ship appears over the UPP mining planet Shānmén, unleashing a black rain of death that yields hideous transformations. Rescue is too far away, and the colonists’ only hope appears in the form of the vessel Righteous Fury. It carries the Jackals–an elite mix of former Colonial Marines and Royal Marines. Led by Zula Hendrix, the Jackals seek to rescue the few survivors from the depths of the planet, but have they arrived time?