Free League have just announced an upcoming cinematic scenario box set for Alien: The Roleplaying Game, Heart of Darkness! Following last year’s Colonial Marines Operations Manual expansion, this release will cap the story set up so far from the previous Free League scenarios Chariots of the Gods, and Destroyer of Worlds. The cover artwork features what appears to be a space station within an ominous red nebula (or black hole?) in the shape of a Deacon, the creature which appeared at the end of Prometheus. 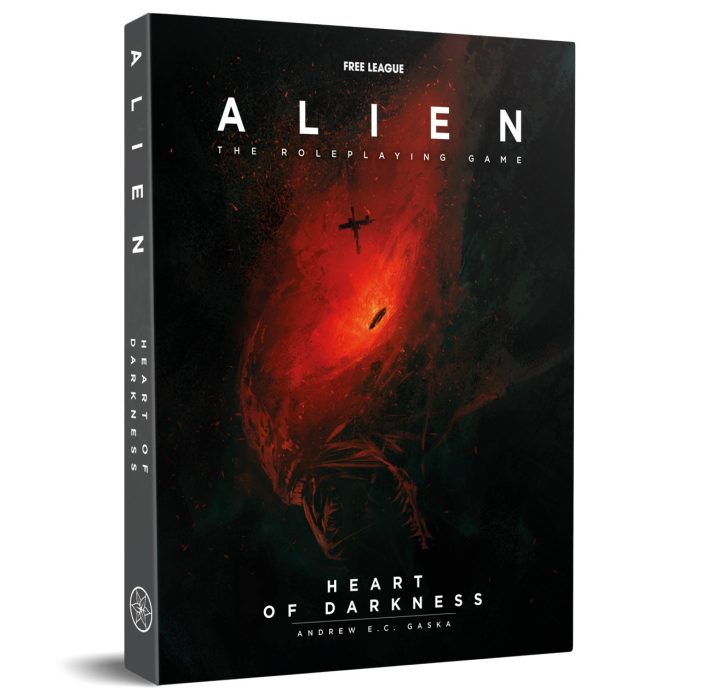 Free League announced the new scenario on social media and in an email newsletter:

“We are thrilled to reveal Heart of Darkness, the upcoming new cinematic scenario for our multiple award-winning ALIEN roleplaying game.

ALIEN: Heart of Darkness is a stand-alone adventure, but also serves as a conclusion to the Draconis Strain Saga begun in the cinematic scenario Chariot of the Gods and continued in Destroyer of Worlds, all written by Andrew E.C Gaska. The expansion is designed for 3–5 players plus the Game Mother and is a spiraling descent into soul-crushing madness…

Heart of Darkness will come in a boxed set including a range of maps, cards, handouts, and pre-generated characters. (Please note – the ALIEN RPG Core Rulebook or Starter Set is required to play.)

Heart of Darkness will be offered in a pre-order and PDF pre-release on the official ALIEN RPG website later this winter, for a full physical retail release in the summer.”

Pre-orders are not up yet but listed as coming soon on Free League’s website before a planned physical summer release. As per usual those who pre-order will receive a PDF digital copy before the final release. If you’d like to get started with the core rulebook or previous expansions for the critically acclaimed Alien: The Roleplaying Game, check out Free-League’s webstore.