For some years now there has been a story that James Cameron pitched Aliens to Brandywine in a very simple and tantalizing way – by writing Alien$ on a chalkboard- floating around the internet. It’s a story that never seemed to have much merit as Alien series research extraordinaire Valaquen explored on Strange Shapes back in 2017. There’s a lot to that annecodate that just doesn’t fit. However, it turns out the interaction did actually happen, just not in the way that is often believed.

With Tech Noir: The Art of James Cameron having recently released, James Cameron is continuing his press rounds to promote the book, where when talking to CinemaBlend, the outlet asked him about the Alien$ story. It turns out it happened, but not in the way that the myth goes. It wasn’t a pitch for the movie – that’s a whole other disaster – but a pitch for the title.

“It was actually on the back of a script, or some kind of presentation document. It might’ve been the treatment. I can’t remember. I was sitting with the three producers, and we were in the office of the then-head of 20th Century Fox. And I said, ‘Guys, I got an idea for the title. And it goes like this.’ And I wrote, ‘Alien’ in large block letters. And I put an S on the end. I showed it to them. I said, ‘I want to call it Aliens, because we’re not dealing with one. Now we’re dealing with an army, and that’s the big distinction. And it’s very simple and very graphic.’ And I said, ‘But here’s what it’s going to translate to.’ And then I drew the two lines through it to make it a dollar sign. And that was my pitch. And apparently it worked! Because they went with the title. They never questioned it.” 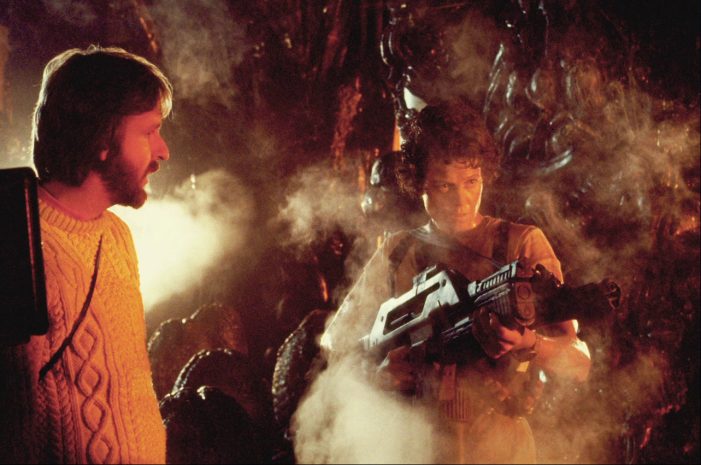 “‘But here’s what it’s going to translate to.’ And then I drew the two lines through it to make it a dollar sign.”

Related News Posts
“He Wants It All Black!” –...
James Cameron Unlikely To Return For Another...
James Cameron Talks Alien: Covenant &...
“Is There Any Validity to Doing...
Michael Biehn Talks Career, Meeting James...