The Alien series isn’t want for iconic imagery or posters that pervade into pop culture to this day. Whether it’s that unforgettable cracked chicken egg on the front of Alien’s poster, or that moment of Ripley and the Runner coming face-to-face on Alien 3’s. For a lot of people we know that image of Ripley carrying Newt in the hive as one of Alien’s poster. But there’s also a very simple one that just proclaims “this time it’s war.”

While talking to io9 to promote his recently released book Tech Noir: The Art of James Cameron, James Cameron spoke about his time designing posters for less-than-stellar movies before segueing into a story about that simple black Aliens one-sheet.

“So I went into the office of the the head of marketing for 20th Century Fox, I literally met him on his last day at the office and his office was all boxed up. I was his last meeting before he left the job,” Cameron began. “He was sitting at the desk and he had this little green plastic frog and he was squeezing a bulb and making it hop around the desk. And I said, ‘What’s with the frog?’ And he said, ‘It’s my stress frog.’ I’m like, ‘OK, this guy is a casualty.’”

“Then he said, ‘But I’ve got a one sheet for you.’ And he showed this one sheet. I think you can get it online, a few of them kind of leaked out. [Note: We weren’t able to confirm which version Cameron is referring to, but if you know, let us know!] And it was this horrible sort of mash-up photography. It looked worse than a Roger Corman one sheet because, like me, Roger believed in good one sheets. Not good movies, but good one sheets. And I looked at this thing and I kind of held it in my hands and and I said, ‘Oh, let me tell you exactly what I think of this one sheet,’ and I just slowly sort of crumpled it up [into] a ball and threw it in the corner. And he was working the stress frog. And I said, ‘Honestly, if I had a choice between that piece of shit and just an all-black frame, I’d go with the all black frame.’ And apparently what happened was I walked out of the office and he called somebody up and said ‘He wants it all black!’ He wasn’t hearing what I was saying. So if you ever wondered why there was literally nothing on the one sheet for Aliens, that’s why.” 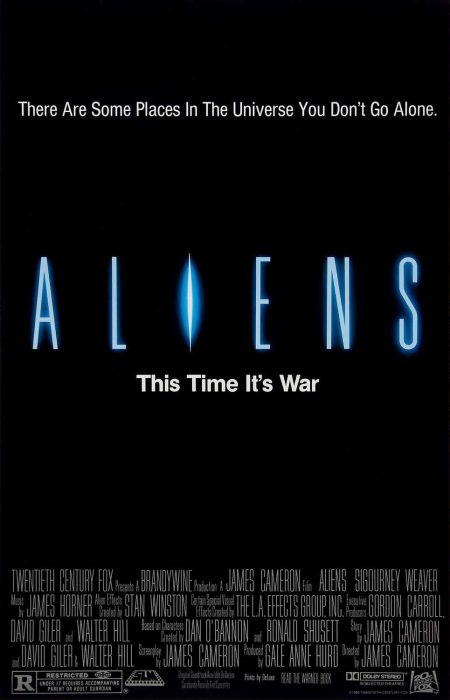 I’ve had a look through some of the earlier marketing samples but I cannot find anything that resembles the mash up that Cameron describes above. So if any collectors out there have this one hidden away in their collection, please feel free to get in touch! We’d love to it.