“The Hunter slowly rolls onto his back, revealing his face. The netted hood of the Hunter’s bio-energetic suit, the source of his camouflage protection, is drawn back, exposing a strikingly human-like face. Beneath the smooth, hairless, nearly translucent skin, a delicate network of veins and vessels can be seen, pulsing rapidly with pale green blood. The Hunter’s eyes, pink and weak-looking, like an albino, blink, trying to focus in the bright sunlight.”

These physical characteristics decribed above represent an early conception of our favorite intergalactic hunter, the Predator. It’s one of many various depictions that is starkly different from what eventually became the iconic creature design that fans know and love today. Taken from the original “Hunter” script completed on July 27th, 1985, this was just one of many drafts written by Predator creators Jim and John Thomas that, along with various concept art, can be used to track the Predator’s physical evolution from a three digit limbed hairless creature it began, to the Rastafarian-like manibled monster it became, thrilling movie audiences everywhere when Predator debuted in theaters June of 1987.

Now since the legal battle between 20th Century Studios and the Thomas Brothers has never been a question of if the creators will reclaim their U.S. copyright to their Hunter(s) screenplay, but only a matter of when, the rights to this iconic intergalactic hunting alien could very well become a tangled mess when that day inevitably occurs – due to the drastic differences between the initial conception of the Hunter story, creature and title – and the final vision known as Predator.

20th Century Studios does not dispute the US copyright reverting back to the Thomas Brothers, only the date of when it should occur.

To understand how strangely the Predator rights could split between creators and studio, it is helpful to look at a similar case in court currently under appeal: The “Friday the 13th” U.S. copyright battle between screenwriter Victor Miller and Horror, Inc.. 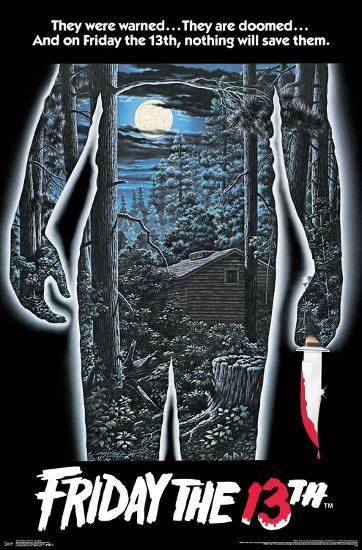 In 2018, the United States Second District of Connecticut Court ruled that writer Victor Miller (who was represented by the same lawyer currently representing the Thomas Brothers – Marc Toberoff) had successfully reclaimed the U.S copyright to his original “Friday the 13th” screenplay. The court confirmed Miller’s work was an eligible ‘spec script’ (a script written outside of any studio on speculation it will sell) versus an ineligible ‘work-for-hire’ script (a script commissioned by a studio) while meeting the appropriate 35 year waiting period and all subsequent conditions. While the court decision is reportedly under appeal because Horror Inc. is still challenging whether Miller’s “Friday the 13th” screenplay was truly a spec script, this is how it currently legally stands.

The tangled result of this U.S. copyright reclaiming is writer Victor Miller’s copyright is actually limited to only the original “Friday the 13th” script and ergo only limited to Jason’s mother Pamela Voorhees as the killer and her son Jason lurking at the bottom of Crystal Lake. And that’s where Miller’s rights stop.

Horror, Inc. still own the rights to the iconic hockey mask-wearing look of Jason that was established in later work-for-hire studio commissioned films. And Horror, Inc. indicated that if their court appeal is unsuccessful, they will continue to make new projects with that hockey mask wearing killer (if they don’t ever come to an agreement with Miller) but they just won’t be able to refer to that killer as Jason Voorhees, nor name any more film installments as “Friday the 13th”.

Here is a statement regarding the ruling by Horror, Inc. in 2018, released exclusively to our friends at Bloody-disgusting.com:

“We are disappointed in the court’s ruling and disagree with its conclusion. We are considering our options including an appeal. In the meantime, the court was very clear that its ruling in favor of Mr. Miller is limited to the original screenplay in which Jason’s mother is the killer and that Mr. Miller’s termination notice did not purport to terminate the separate copyright in the iconic supernatural killer who wears a hockey mask. It also does not grant any rights to Mr. Miller that would enable him to use any element of the original screenplay outside of the United States.

“Following the guidelines set down by the Court’s ruling, we intend to aggressively explore many opportunities for new projects featuring settings and characters (including the hockey mask-wearing killer) not included in Mr. Miller’s screenplay, and in fact are currently in development on new projects that are consistent with the ruling which will be announced soon.” 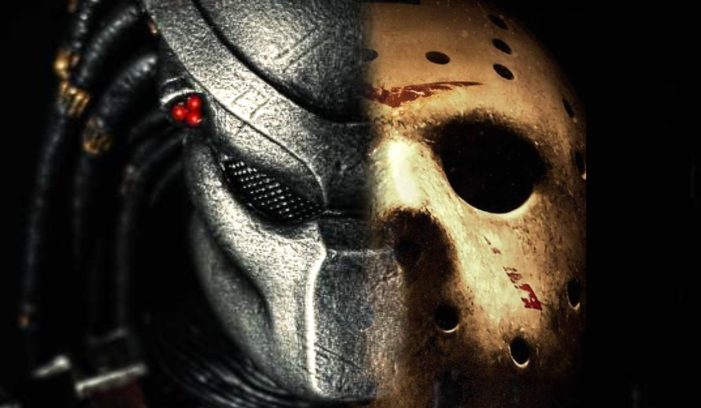 When the rights to the first spec script “Hunter” was sold by Jim and John Thomas to 20th Century Fox back in January 28th 1985, the story had many differences compared to the finished “Predator” film we know and love. Instead of characters like Dutch, Billy, and Mac, there was Matheny, Miguel & Williams. And Anna, while present, did not get to the chopper like she did in the finished film; No, she was killed off by the Predator. But the biggest difference was always the titular monster’s aesthetics. Yes, our favorite Hunter from space seemingly started out very different looking than the wonderfully unique alien being that Stan Winston expertly crafted for the film.

Yet, per 20th Century Studios, based on the deal that was signed in January 1985, only the elements contained in that very first Hunter speculation screenplay can be reclaimed by the Thomas Brothers. All the other changes that occurred afterwards to the script, i.e. to the characters, the creature, even the film’s title change from “Hunter” to “Predator” is considered a work-for-hire and not applicable to U.S. copyright reclaiming (because those changes were commissioned by the studio): 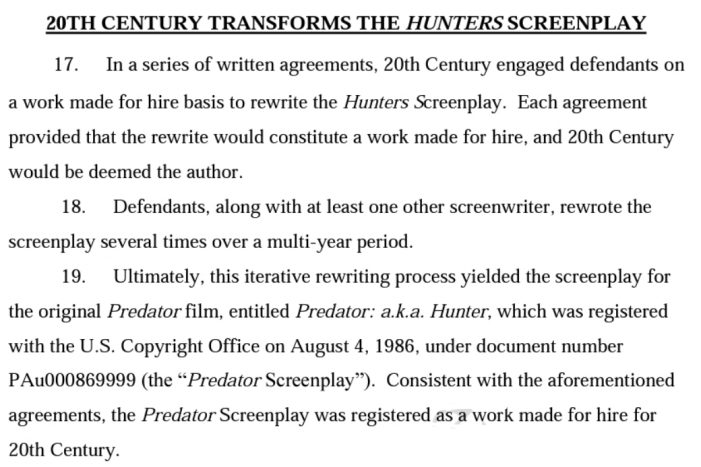 If this holds true much like the “Friday the 13th” franchise, on that date of reclaiming the U.S. Copyright of “Predator”, the rights could be divided between the Thomas Brothers and 20th Century Studios on a very strange line.

From that day on, the Thomas Brothers will certainly have full rights to make films and projects freely based on their Hunter script, but only in the United States and they seemingly won’t be able to use the title “Predator” nor the iconic creature design as we know it.

Considering the very first script is not even in public circulation, the differences between the Thomas Brothers “Hunter” and what we know as the “Predator” today might even be more vast than we realize. The Thomas Brothers have mentioned that their original idea featured “a brotherhood of alien hunters” who come to Earth to separate and hunt. Often in legal documents, the title of the spec script is referred to in plural as “Hunters” as much as “Hunter”, which may be an indication that there was more than one monster in the Thomas Brother original spec script that was sold to 20th Century Fox in January of 1985.

And when we take a look at the early 1985 Hunter concept art by artist Nikita Knatz, as well as the cover to the Dark Horse Comics “Predator: The Original Screenplay” limited series that was cancelled due to the recent pandemic, the Hunter creature from space may have been first written even more reptilian than initially realized.

Whatever that very first incarnation of the Hunter creature resembled, the Thomas Brothers will be able to freely exploit that creature concept and script in novels, games, collectibles and films throughout the United States. (The Brothers will require an agreement with 20th Century Studios to release something internationally, however.)

Now on the 20th Century Studios side, looking through the prism of the “Friday the 13th” case, it may be possible that the film studio can continue to make films on their own as well, without securing the Thomas Brothers “Hunter” script license. 20th Century Studios assumingly will be retaining the work-for-hire “Predator” title, as well as Stan Winston’s final work-for-hire creature design.

But theoretically, could 20th Century Studios drop all the elements from the original Hunter screenplay like perhaps the trophy-collecting sports hunter aspect and camouflage technology and still make new Predator content? Perhaps. But if they were legally permitted to finagle such a move, removing the core iconic elements of the Predator could risk turning our favorite space Hunter into just a generic killing monster, losing its appeal that drew audiences to the character in the first place. So would 20th Century Studios consider this option if legally able? We don’t know.

So what will become of Predator once the Thomas Brothers reclaim their spec script copyright? We wish we could predict the future. It’s obvious that the best course of action from the fans’ perspective would be for both the Thomas Brothers and 20th Century Studios to reach across the table and come to a long term deal acceptable to both parties involved. This has yet to occur with the “Friday the 13th” franchise of course. Lawsuits like these can create bad blood on both sides, but hopefully at least with “Predator”, cooler heads will ultimately prevail. We shall see.