With the new September solicitations from Marvel, we have our first look at the covers for Alien Issue #7, which will begin the 2nd story arc of Marvel’s current on-going Alien series.

The creative team from the first arc, writer Phillip Kennedy Johnson and artist Salvador Larroca will be returning for the new arc. It’s currently unknown if Guru-eFX will be back for the colors.

Check out the main cover and two of the variant covers below. 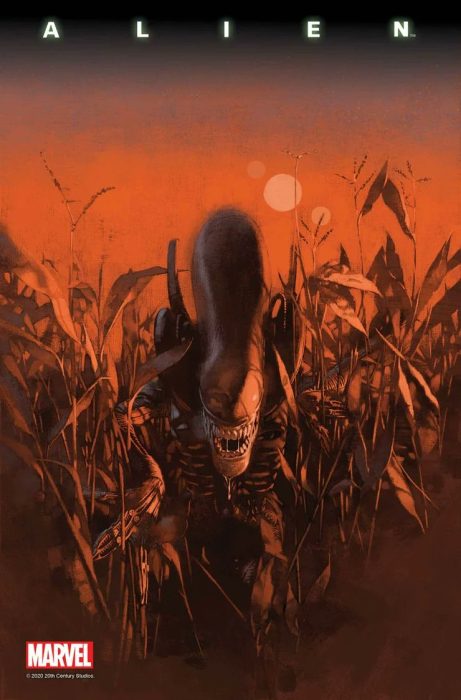 We have some minor plot details from the solicitation:

THE SEARCH FOR SANCTUARY BEGINS!

• A small colony of “Spinners,” looking to lead a simpler life, have nearly completed terraforming a moon.

• A ship crashes into their Eden from the heavens.

• A terror is unleashed.

The main cover art is by Marc Aspinall, and features an Alien stalking through cornfields. This imagery and that of one of the variant covers with a number of Aliens scaling a barn suggests a farm setting. From the story tease we can gather the farm is located on a colonized moon. Whether or not this will connect directly to the conclusion of the first arc or will be focusing on an entirely different story remains to be seen.

Also on the horizon is a new one-shot Aliens comic, Aliens: Aftermath. Written by Benjamin Percy, with artwork by Dave Watcher, the comic is scheduled for release on July 14th and timed to celebrate the 35th Anniversary of Aliens.

Keep an eye out for our review of the first Marvel Alien story arc after it concludes in late August. Issues #1-#6 will be available in a trade paperback titled ‘Vol 01 Bloodlines’, which is scheduled for release in October.

Thanks to Kailem for the news. Make sure you stick with Alien vs. Predator Galaxy for the latest Alien and Predator comic and novel updates! You can follow us on Facebook, Twitter, Instagram and YouTube to get the latest on your social media walls. You can also join in with fellow Alien and Predator fans on our forums!