Hot on the heels of the successful release of the first Alien comic issue under the new publisher, Marvel has announced that it will be celebrating the 35th Anniversary of Aliens with a special one-shot double-sized issue.

The new comic will be written by Benjamin Percy, with artwork by Dave Watcher.

Aliens: Aftermath #1 will follow a group of journalists investigating what remains of the ‘Hadley’s Hope’ colony 35 years after the events of the blockbuster second film.

This July, Marvel Comics will honor the 35th Anniversary of Aliens with a special one-shot by writer Benjamin Percy (WOLVERINE, X-FORCE) and artist Dave Wachter (IRON FIST: HEART OF THE DRAGON). Celebrating one of the most influential science-fiction films of all time, ALIENS: AFTERMATH #1 will be a double-sized issue featuring an all-new story set in the same terrifying universe of Aliens. The action will take place at Hadley’s Hope and present a terrifying possible future for LV-426, the location of the groundbreaking 1986 film.

It’s been 35 years since the tragedy of the Hadley’s Hope colony, but what happened during that ill-fated venture has been shrouded in mystery. A renegade crew of investigative journalists are heading towards the moon that Weyland-Yutani has wiped from all records, and they’ll bring back the truth even if it kills them…and what remains in that bombed-out site will try to do just that. Here’s what Percy had to say about penning this new saga:

“When I was a kid, I had a door-length poster of a xenomorph crashing through the wood, tearing off the hinges, creeping forward with a drippy fanged smile. This is the image I would drift away to every night, which no doubt influenced my imaginative hard-wiring, along with the films and comics that I watched and read over and over and over. To this day, I can’t grip a knife without wanting to lay my hand on a table and tick-tick-tick the point between my splayed fingers — I can’t play a game of ping-pong or Clue without yelling, ‘Game over, man.’ — I can’t scratch an orange tabby without whispering , ‘You are my lucky star….lucky, lucky, lucky, lucky, lucky.’  I’ve been in love with these stories most of my life, and it’s truly an honor and a delight to celebrate the 35th anniversary of Aliens with a script inked in acid blood.”

Check out Phil Noto’s cover above and pick up ALIENS: AFTERMATH #1 when it hits stands on July 14!

Marvel also included the cover artwork in their announcement by Phil Noto, which you can see below. 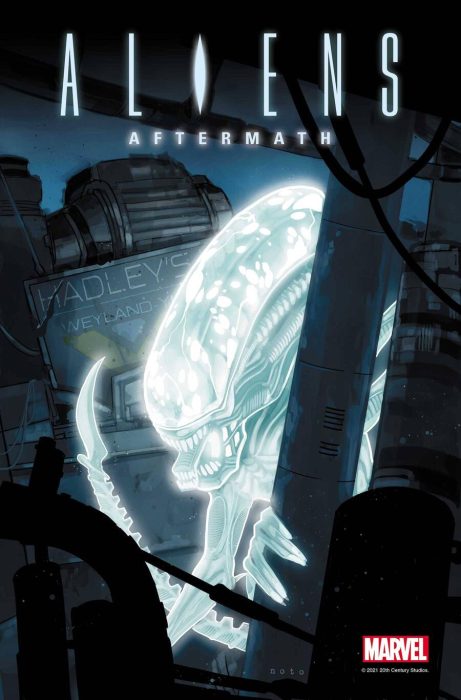 If the first Alien comic is anything to go by, we could see a number of variant covers for this one shot as well. The comic is scheduled for release on July 14th

It’s great to see the first bit of media celebrating Aliens 35th Anniversary, and we hope to see more to come! Regarding the Hadley’s Hope setting, it will be interesting to see if the events of some of the other recent stories set there will be touched on such as what happened in the Titan Book ‘Alien: River of Pain’.