Congratulations to our winners! Tom Cardin, Lucas Di Menza and Chase Benn have snagged the double prize and will each be receiving Predator: Hunting Grounds and the Valkyrie! And Luke Melendez, Gaby Margutti and Ivan Sokolovskiy have snagged a copy of the Valkyrie Predator! Emails have been sent out to all winners inquiring about preferred platform. We would like to thank everyone who participated as well.

Alien vs. Predator Galaxy and Illfonic are teaming up to give away 3 copies of both Predator: Hunting Grounds and the Valkyrie Predator DLC, as well as 3 copies of the Valkyrie on her own for either Playstation 4 or PC!

As we discovered in October, the Viking Predator can be traced back to when the Viking raiders managed to draw the attention of the Yautja. As the legends of this mighty creature spread, Norsemen saw an opportunity to gain an honorable death by way of this wanderer, so they continued to pursue glory.  Few even relished over a Yautja death, which angered the Predators, so they sent in their fiercest warrior – the Valkyrie. This newest Predator class’ sole purpose is to choose the slain worthy of a place in Valhalla. Many fought against her in search of glory, but none could best her. So beware, if you were able to bring a Viking Predator down, she is coming for you in this DLC pack. 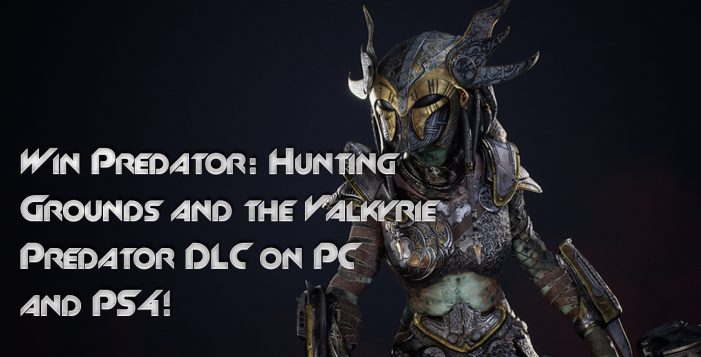 And what do you have to do to get your hands on one of these codes?! It’s easy, just make sure you’re liking both AvP Galaxy and Illfonic on Twitter and enter your Twitter handle in the form below!

a Rafflecopter giveaway
The competition is open worldwide. Winners from the States will receive codes to redeem game or DLC (don’t worry, if you already have the game you’ll receive separate codes and be able to give the game away to a friend), winners outside of the States with PlayStation 4’s will receive an equivalent amount of PSN credit to then purchase Hunting Grounds and the Valkyrie.

*Just a slight amendment to say that this is for both PC and PS4.