With the debut of Alien #1 only a week away, Marvel’s solicitation for June are now up revealing that we’ll be seeing the launch of their first Predator series! Marvel’s debut Predator series will be written by Ed Brisson, with artwork from Kev Walker.

In the near future, a young girl sees her family slaughtered by the deadliest and most feared hunter in the universe: a PREDATOR. Years later, though her ship is barely holding together and food is running short, Theta won’t stop stalking the spaceways until the Yautja monster who killed her family is dead…or she is. Ed Brisson (IRON FIST, GHOST RIDER) and Kev Walker (DR. STRANGE, DOCTOR APHRA) forge a violent, heartbreaking, unforgettable new chapter in the PREDATOR saga not to be missed! 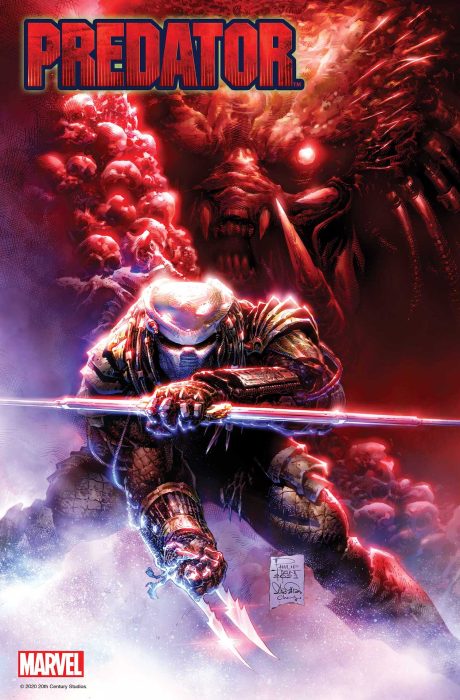 Unlike Aliens’ 14 variant covers, Predator #1 will only have a modest 12 and is currently slated for release at some point in June. This will be Ed Brisson’s first venture into Predator. Brisson wrote Marvel’s Dead Man Logan and their short-lived relaunch of Ghost Rider. Talking about the announcement on Twitter, Brisson said:

The world we’re building here is one I’m incredibly proud of and I cannot wait to get this book into people’s hands.

Artist Kev Walker is known for his work on Warhammer comics, and illustrating cards for Magic: The Gathering. He’s also been working with Marvel for some years on their various Avenger spin-offs. And like Brisson, this will Walker’s first time working on a Predator series.