Illfonic has just released Patch 2.14 which sees custom Private Matches added to the game and with our first new DLC of 2021 – the Valkyrie Predator! The Valkyrie is something we expected to make an appearance and continues with Hunting Ground’s recent dive into Norse inspired Predator classes.

As we discovered in October, the Viking Predator can be traced back to when the Viking raiders managed to draw the attention of the Yautja. As the legends of this mighty creature spread, Norsemen saw an opportunity to gain an honorable death by way of this wanderer, so they continued to pursue glory.  Few even relished over a Yautja death, which angered the Predators, so they sent in their fiercest warrior – the Valkyrie. This newest Predator class’ sole purpose is to choose the slain worthy of a place in Valhalla. Many fought against her in search of glory, but none could best her. So beware, if you were able to bring a Viking Predator down, she is coming for you in this DLC pack.

Along with her cunning, this hit and run character will wreck your house. She carries with her a mighty two-handed Norse Hammer that deals crippling close-range damage. The secondary attack provides a heavy overhead swing with increased damage to any prey unfortunate enough to stand in her path. This Hammer is Predator’s interpretation of Odin’s vision for superior god-like weaponry mixed with Yautja ancestry and is available for early access* with this new paid DLC. 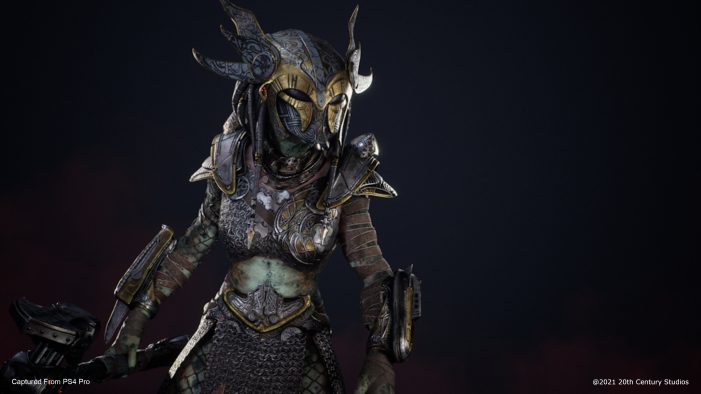 As has become typical of the weapons included in the DLC, the Norse Hammer is early access and be be available for free in the next update. On that same note, Beast Mode’s Rocket Launcher is now available as an unlock at level 85 for all.

Patch 2.14 also sees the release of a new custom Private Match mode which allows more flexibility to create your own modes.

You now have full control with the new Custom Private mode for both Clash and Hunt. With an abundance of match styles, you can tweak, adjust, add, or omit to your hearts’ content. This mode has a few hidden gems sure to make everyone happy. You can modify actions under a range of categories: Clash, Hunt, Fireteam, HUD, Predator, Weapons/Gear, and General Gameplay. We even added in fun modes; why so serious after all? The takeaway is we want to give you, the community, the power through an array of different modifiers and modes to find the perfect way to play with friends.

The new patch also features three new Predator masks, a change in Field Locker distribution and the usual expected fixes. You can find the full patch notes on Illfonic’s forums. I think it would be safe to say we were all expecting Predators’ Isabelle to make an appearance in February, so the Valkyrie comes as a bit of a surprise. It also sounds like Isabelle is not on the cards for next month either, with Illfonic teasing the next DLC as something already referenced in Dutch’s tapes.

Be sure to stick with Alien vs. Predator Galaxy for the latest news on Predator: Hunting Grounds! You can follow us on Facebook, Twitter, Instagram and YouTube to get the latest on your social media walls. You can also join in with fellow Alien and Predator fans on our forums!