Happy new year to everybody and hopefully this one will be better than the last one. A new design/theme is now out for AvPGalaxy – Version 8. Given that Aliens is going to be celebrating its 35th Anniversary this year, I’ve based it around Hadley’s Hope. I’ve made the layout a little wider, there’s a new mobile layout and the Gallery has been completely redone. I’ve got rid of the old system and used something a bit more modern so images in there now will be presented in a mosaic-style layout. Thanks to Hicks and RidgeTop for trying to keep me motivated to get this new theme done for the site. It has been long overdue.

A lot of work has also been done to the Games section the last few months and I’ve tried to add as much as information as I could find even for really old games. Thanks to Ross Sillifant for suppling me with really obscure magazine articles for many games. 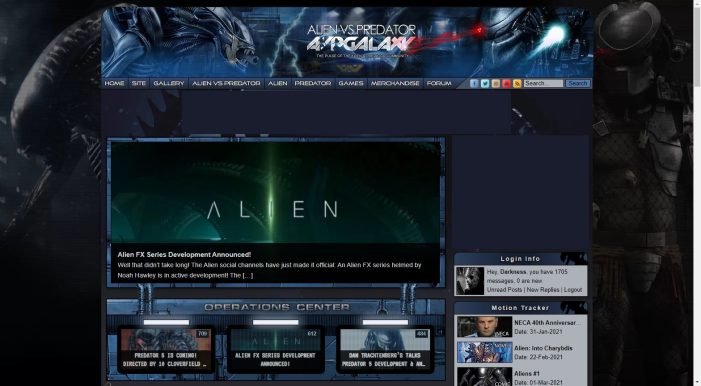 It’s been quiet in these franchises for the past couple of years but I think we’ve finally reached the light at the end of the tunnel with the recent announcements at the end of last year. One of the biggest pieces of news in 2020 was that Marvel have taken over the licensing rights of new Alien and Predator comics from Dark Horse. New Alien and Predator Omnibuses are due out later this year but the first brand new Alien comic from Marvel will be hitting shelves in March 2021.

In November, a new Predator sequel was announced which is going to be directed by Dan Trachtenberg and written by Patrick Aison. Trachtenberg is best known for directing 10 Cloverfield Lane. The story is rumoured to be set in the past and will focus around Native Americans before the territories were taken by the American settlers.

The last big piece of news is that in December, Disney announced that an Alien TV Series is in active development at FX and will be coming to the Hulu streaming platform. Writer and Producer Noah Hawley will be overseeing the series. Hawley is best known for being the showrunner on the shows Fargo and Legion, and has been working to get an Alien TV series launched for quite some time.

As usual, we’ll be covering these projects intensely and will try to bring you all the latest news and rumours surrounding the projects. We’ll keep releasing new articles and videos where we can and keep up with the podcast. Hicks, RidgeTop, Xenomorphine and Voodoo do a great job with the podcast. We’ve come a long way with the series since the team first started it in 2011. In 2020, we released 21 episodes including interviews with the likes of writers Mark Verheiden and Alex Litvak, and Charles de Lauzirika. We’ve got a lot more planned for this year.