Following on from their recent celebration of the 40th anniversary of Alien with Alien: 40 Years, 40 Artists (which I really enjoyed!), Titan Books have teamed up with Printed In Blood to publish another artbook, this time in celebration of Aliens! Bloody Disgusting had the exclusive announcement, revealing that Aliens – Artbook is on the way!

As one of the most highly regarded movie sequels of all time, Aliens quickly embedded itself in the minds of cinemagoers around the world when it was released in 1986, grossing over $131 million worldwide.

This lavish new coffee table book will sit on Titan’s list alongside J.W. Rinzler’s in depth explorations, The Making of Alien (2019) and The Making of Aliens (2020), and Alien: 40 Years 40 Artists, the artistic celebration of the 40th anniversary of the film, as well as an extensive Alien fiction program.

Bursting with brand new and exclusive art, the book includes over 100 pieces by professional artists, illustrators, concept artists, comics artists and graphic designers. From character portraits, faux book covers and poster concepts, to iconic scenes, wanted posters and renderings of the iconic Xenomorph and Alien Queen, each artist puts their own stamp on the Alien universe. 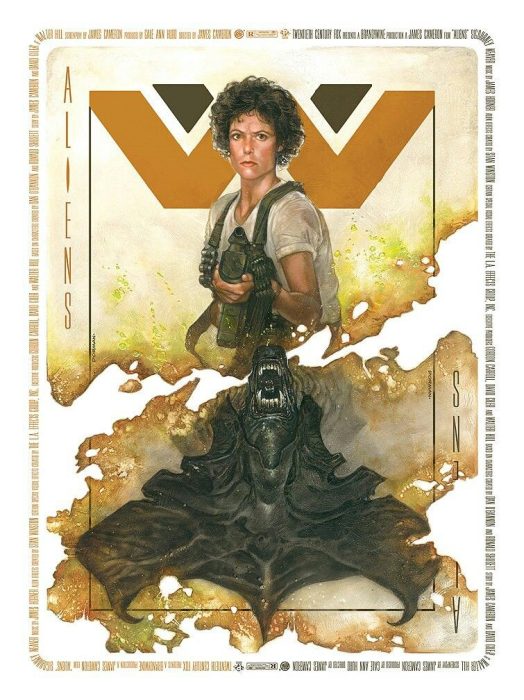 Printed in Blood exclusive Aliens art by Dave Dorman. Not for the book.

Printed in Blood have done some previous Alien prints, working with the likes of Dave Dorman, Angel Trancon and John J Hill in the past!  Aliens – Artbook is currently slated for release on September 7th 2021 for $50. Though no billed as being in celebration of, 2021 is actually Aliens’ 35th anniversary!