With the last of Dark Horse Comic’s Alien/vs/Predator comics now released, Marvel Comics has officially announced the creative team behind their first venture in Alien, as well as brief synopsis of what to expect.

Written by Phillip Kennedy Johnson (EMPYRE: CAPTAIN AMERICA) with art by Salvador Larroca (DOCTOR DOOM), ALIEN #1 will be a thrilling addition to the incredible legacy that began with the groundbreaking 1979 film. Featuring both new and classic characters from Earth and beyond, this bold take on the Alien mythology will entertain both longtime fans and newcomers to the legendary horror/science-fiction saga.

The new story will feature a Weyland-Yutani mercenary named Gabriel Cruz as he battles a deadly new breed of xenomorph with the survival of his child hanging in the balance. No stranger to infusing horror with the classic Marvel storytelling, Phillip Kennedy Johnson most recently shocked readers in the terrifying MARVEL ZOMBIES: RESURRECTION series. 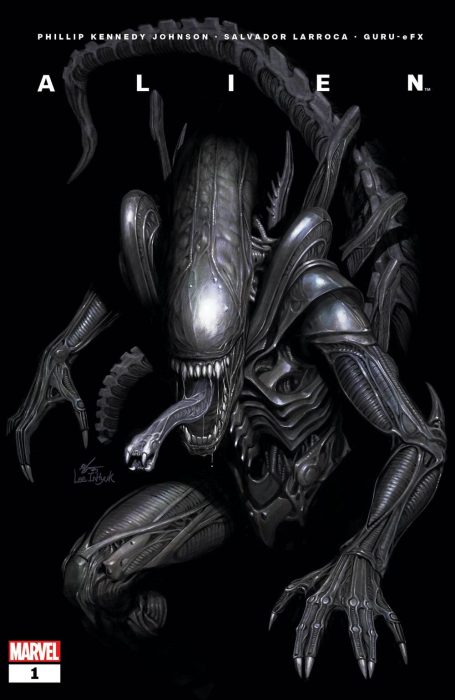 Both are new names to the expanded universe of Alien, but as the press release points out Johnson has experience writing for the darker side of Marvel, having written their recent Marvel Zombies series, Resurrection.

The series has no subtitle yet, and there’s no news as to if this will be a limited release or an on-going, but talking to Games Radar last September about his next project (which was this), Johnson told the outlet that he hoped “to be writing it for a long, long time.”

The first issue of Marvel’s Alien is currently slated for release in March of 2021!