A month ago the bombshell was dropped that Alien and Predator comics would be moving to Marvel as of 2021. It was a move we were all expecting since Marvel are owned by Disney, but it was still a bit of a shock. But in that announcement, it was also revealed that Marvel would be republishing Dark Horse’s older library of Alien and Predator comics and now we have our first details!

Comic YouTube channel Near Mint Condition has the exclusive announcement of Marvel’s first Aliens Omnibus! It seems like it’s going to be a big one! You can check out the included series below:

Given the dates on the series I would expect those are the original runs of the first three series, complete with Hicks and Newt rather than Wilks and Billie, and black-and-white artwork for the first series. 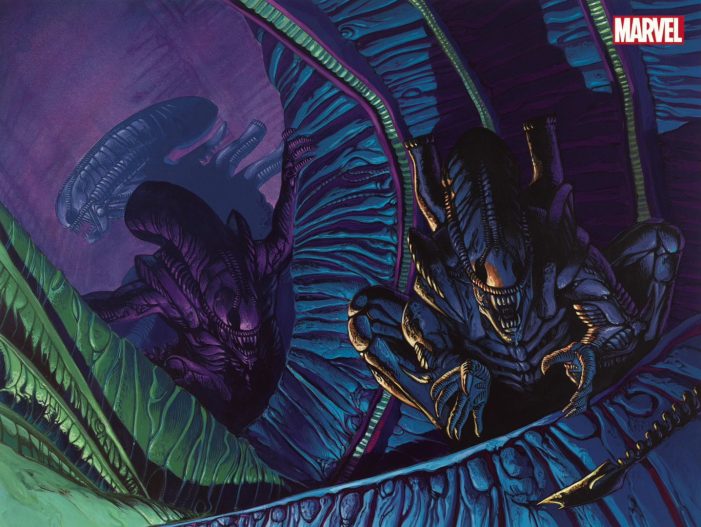 One of two potential pieces being considered as the volume’s cover art. Artwork by Mark Nelson.

While Dark Horse did reprint the majority of Alien (and Predator, and AvP) comics in their own Omnibus series back in the early 2000’s, this Marvel Omnibus marks the first collection/reprint of Tribes, Newt’s Tale, and Alien 3!

The Space Marines mini-comics have seen some reprinting in NECA’s release of the original Kenner inspired figures, the comics have never been collected in one place. The reprints from Dark Horse’s ancillary series include Theory of Alien Propagation, Advent/Terminus, The Alien, Reapers and for the first time ever Countdown!

The Omnibus is currently slated for release April 2021, perhaps hinting at an Alien Day release. Thanks to Russ840 and Chad Campbell for the news! You can check out the original video below.

Update 21/08/2020: Marvel has now officially announced it on their own channels, where they confirmed that the release of Aliens Omnibus Volume 1 using the existing artwork will be a “direct market exclusive.” The general release of the volume will come with brand new cover artwork by Greg Land.