Earlier this year Ty Ellingson shared some artwork he did while working with Neill Blomkamp on his aborted Alien 5 project. In particular Ty shared concepts for Sky Crane variant of the iconic dropship.

Whos Nick, formerly of Hybrid Network, has shared a new interview he conducted with Ty regarding his work in the industry, and Ty’s involvement with Blomkamp, and Alien 5 in particular was discussed. When asked about the rumours surrounding whether or not Blomkamp completed a draft of the film, Ellingson said:

“I didn’t ever see a completed script. I saw what I would call a scriptment – a treatment – a scriptment is like half-and-half. But it was there. It’s not that uncommon to have an advanced scriptment, a partial script with treatment attached, to move the project forward. That’s how Mimic got made. Mimic was a scriptment.” 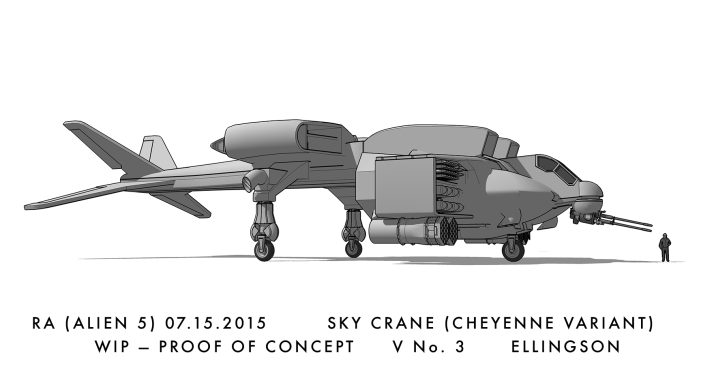 Ellingson went on to talk to about how James Cameron’s Avatar was green-lit from a similar scriptment, something that Aliens’ very first treatment was also very similar with in terms of format. Ty further elaborated that –

“I didn’t see any holes in it that you couldn’t fill, and I think that Neill was working with writers at the time that we were doing the work. The set pieces, the beats were there. I don’t know whether it was a finished draft or an advanced treatment, I don’t know. It wouldn’t mean there was a problem one way or the other.”

The two discussed other things about Alien 5, such as how heartbroken that Ellingson was following the collapse of the project, which you can listen to the full interview below. The Alien 5 discussion begins around 01:13:00.