One of the best things about Alien Day is seeing all of the incredible artwork shared online in celebration of it, and one particular post really caught our eye.

Concept artist TyRuben Ellingson, who has quite an impressive background in the film industry, shared to Twitter a new Aliens-style “Cheyenne” dropship he made during the pre-production phase of Neill Blomkamp’s ‘Alien 5’ before it was ultimately cancelled.

The dropship design was a Sky Crane variant, meant for airlifting large cargo. These different angles of the 3D render give us a good look at the dropship, but we’ve actually seen it before! When Neill Blomkamp himself shared a few pieces of concept art back in late 2017. 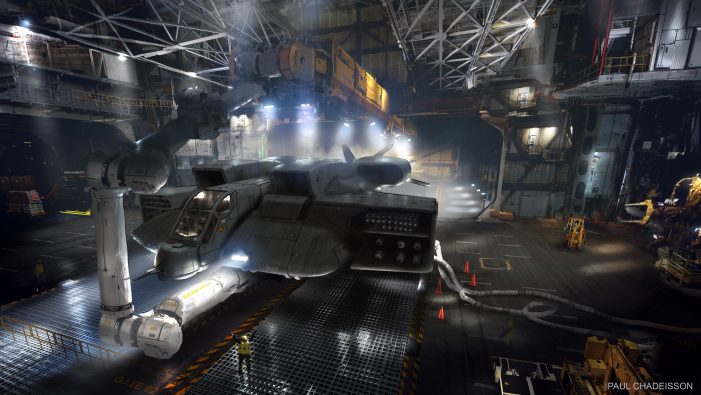 As artist Paul Chadeisson said on his ArtStation listing for the piece, “I have been painting over the 3D work from TyRuben Ellingson, could not have done this without him!”

This isn’t the first work that TyRuben Ellingson has contributed to the Alien franchise, in fact, it’s not his first work for a cancelled (iteration) Alien film, as he also did some of the lovely conceptual pieces from the earlier and unused Vincent Ward version of Alien³.

Seeing more of this concept art from Alien 5 again makes me hope for an eventual art book for the cancelled film, as I’d guess there are many impressive additional works that have yet to be seen.