Free League are celebrating Alien Day with the announcement of two new expansions for their fantastic Alien: The Roleplaying Game! The new cinematic campaign, Destroyer of Worlds, is a continuation of Chariot of Gods which was released alongside the core book at the end of 2019!

“Destroyer of Worlds, also penned by Gaska, is a continuation of the story from Chariot, this time focusing upon an iconic type of character from the ALIEN universe: the Colonial Marine. A team of Colonial Marines get dropped onto the moon Ariaricus to handle a growing insurgency, but soon find themselves fighting for their lives against enemies beyond their worst nightmares. Priced at $29.99, the Destroyer of Worlds Cinematic scenario will come in a boxed set, including maps, handouts, and cards for a fully immersive tabletop experience.”

In addition to the new scenario Free League has also announced a new Starter Kit which includes an abridged version of the core ruleset as well as plenty of additional goodies like counters and dice to help get you started!

“The ALIEN RPG Starter Set is designed to be the perfect entry point into the game and the ALIEN universe. Affordably priced at $49.99, it contains everything needed to start playing, including an abridged 104-page softcover quickstart of the core rules, 20 custom dice, reference cards, character handouts, a huge starmap, and the complete Cinematic scenario Chariot of the Gods by sci-fi author Andrew E.C. Gaska.” 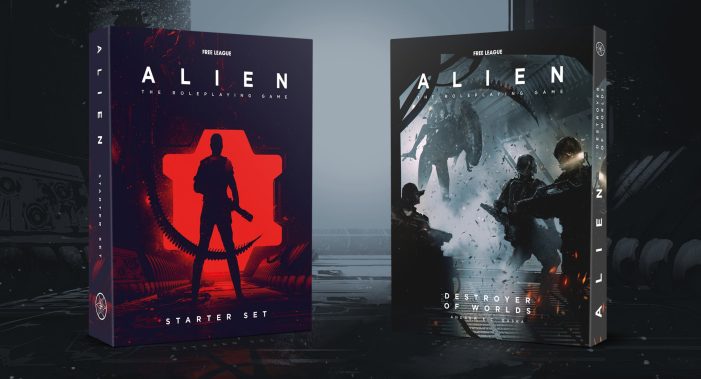 The new expansions are currently expected to release in August and are available to pre-order on Free League’s online store! The starter set will be $47/£38, and the expansion on its own is $29/£24. Or you can pick up a bundle of both of them for $72/£59. While the physical copies wont ship until August, you’ll receive a PDF copy a little earlier.