We may have lost Dark Horse Comics’ prequel series to Cold Iron Studios upcoming “persistent online shooter,” but it looks like Titan still has our backs! Those of you who picked up Alien: Prototype when it was released last week may have noticed a previously unannounced title on the Other Titles page – Alien: Infiltrator! Thanks to an Amazon listing, we now know that the new book is actually a prequel to Cold Iron Studios’ game!

“The official prequel to the huge new Alien video game from Cold Iron Studios, as a Weyland-Yutani scientist arrives at Pala Station and finds the researchers there courting disaster… of the Xenomorph kind.

Dr. Timothy Hoenikker arrives on Pala Station, a Weyland-Yutani facility. Lured there by the promise of alien artifacts, instead he finds a warped bureaucracy and staff of misfits testing the effects of Xenomorph bio-materials on living creatures. Unbeknownst to the personnel, however, there is an infiltrator among them whose actions could spell disaster. Also on staff is Victor Rawlings, a former marine who gathers together other veterans to prepare for the worst. As the personnel receive a delivery of alien eggs, the experiments spin out of control, and only the former Colonial Marines can stand between the humans and certain death.”

Unlike the cancelled Rising Threat, Infiltrator doesn’t seem to be focusing on existing characters but a new cast! Alien: Infiltrator is written by Weston Ochse. Ochse has previously written for both the Alien and Predator franchise, with Zero to Hero in Aliens: Bug Hunt and May Blood Pave My Way Home in Predator: If It Bleeds. 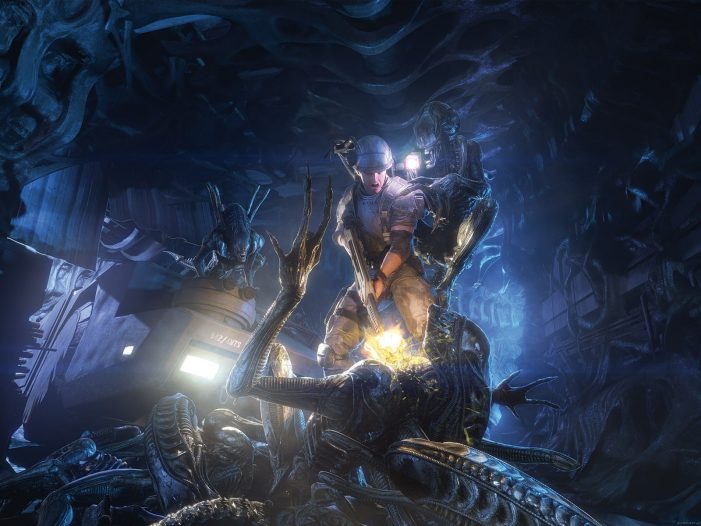 Following Disney’s purchase of 20th Century Fox and the rumors that Disney was looking to sell FoxNext, the company responsible for publishing Cold Iron Studios’ online Alien shooter, we haven’t actually heard anything about the upcoming game before this announcement.

Alien: Infiltrator is currently available to pre-order on Amazon US, with a release date of July 28th. Thanks to felix for the heads up!

Make sure you stick with Alien vs. Predator Galaxy for the latest Predator novel and Predator: Hunting Grounds news! You can follow us on Facebook, Twitter, Instagram and YouTube to get the latest on your social media walls. You can also join in with fellow Alien and Predator fans on our forums!