With Keith R.A. DeCandido’s adaptation of Alien: Isolation now on the bookstore shelves, and Tim Waggoner’s Alien: Prototype due out at the end of October, our eyes turn to next year’s recently announced Alien: Phalanx.

Author Scott Sigler announced the book via Twitter but we didn’t know anything about what the new novel would involve. A recent update to the product page on Amazon has changed this and now we have our first synopsis of Alien: Phalanx!

It’s Medieval carnage meets Alien as a pre-industrial society fights against extinction brought about by a massive infestation of Xenomorphs.

Ataegina was an isolated world of medieval castles, varied cultures, and conquests, vibrant until the demons rose and spread relentless destruction. Swarms of lethal creatures with black husks, murderous claws, barbed tails and dreaded “tooth-tongues” raged through the lowlands, killing ninety percent of the planet’s population. Terrified survivors fled to hidden mountain keeps where they eke out a meager existence. When a trio of young warriors discovers a new weapon, they see a chance to end this curse. To save humanity, the trio must fight their way to the tunnels of Black Smoke Mountain–the lair of the mythical Demon Mother.

While certainly a first for Alien novels, the Expanded Universe has taken the Aliens in the past with Aliens: Stalker, a one-shot comic written and illustrated by David Wenzel that pitted Vikings against an Alien! 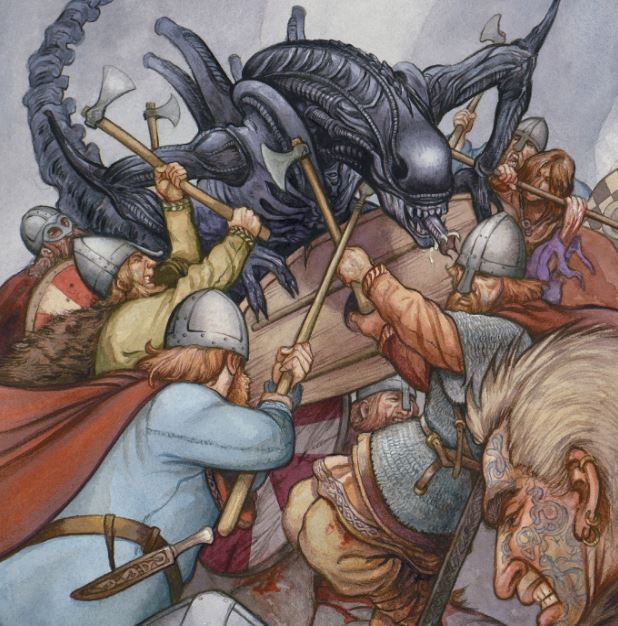 Though it seems Phalanx isn’t going back in Earth’s history, but rather a colony world that seems to have adopted the old ways (echos of Vincent Ward’s Alien 3) or as a result of a disaster (similar to Prince of Thorns). Alien: Phalanx is currently available for pre-order on Amazon (only US, not UK so far) with a release date of February 25th, 2020.

Thanks to felix for the news! Make sure you stick with Alien vs. Predator Galaxy for the latest Alien and Predator comic and novel news! You can follow us on Facebook, Twitter, Instagram and YouTube to get the latest on your social media walls. You can also join in with fellow Alien and Predator fans on our forums!