Alien vs. Predator Galaxy recently had the chance to talk to Predators’ director Nimrod Antal about his time working on Predators for our Podcast! We chatted about a lot of Nimrod’s experience helming the third Predator film and when the topic of souvenirs from the film came up, Nimrod told us about some of the mementos he still has from Predators!

“During the Berserker/Classical Predator battle – I think we were capturing the epic shot of the two blades clashing as they first slam into one another and the Classical Predator’s blade broke off. The tip of the blade, about a six inch length, broke off and fell into the mud. It was pretty evident in the take as well. We had to go again. So while they were resetting and no-one was paying attention – or I thought no-one was paying attention – I sneaked onto the set and stole the broken piece of Predator blade and put it in my pocket.

As I’m leaving the crime scene, I think I’ve gotten away with it, I see Greg Nicotero [co-founder of KNB who provided the Predator effects for the film] staring at me: looking at me like “what are you doing?! What the hell are you doing?!” and I said “Man, this is a piece of history right here. It’s a broken blade from a Predator battle!” I still have it to this day. It’s one of the few possessions I’ve kept from some of the films I’ve made.” 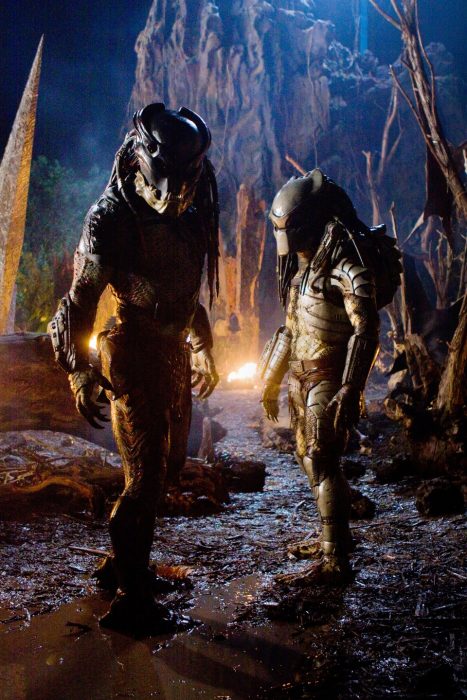 In addition to the piece of blade, Nimrod also told us he’d kept the Predator skull glimpsed in the camp scene and told us how Greg Nicotero gifted him with a set of Predator masks. But you can hear all about that (and plenty more!) on Monday the 17th when we upload the 90th episode of the Alien vs. Predator Galaxy Podcast!