If you’ve not come across the viral sensation that is Alien: The Play, then it’s likely you’ve been trying hard not to because the drama club at North Bergen High School has been given some very serious love by Alien fans and alumni!

The official Alien Anthology YouTube channel have just uploaded a highlights video showing off the students at work and the Queen of Alien herself, Sigourney Weaver, talking about the amazing work that went into producing Alien: The Play.

On Alien Day, 4/26/19 audiences attended a special encore presentation of Alien: The Play at North Bergen High School in New Jersey. We spoke with Sigourney Weaver who surprised the students backstage, as well as the teacher who made it all happen.

Vulture also recently published a very nice piece on the production in which they interviewed some of the cast and crew involved in making Alien: The Play a reality!

“I’m just gonna run around like a madman,” says Steven Defendini, the art director at North Bergen High School in New Jersey, as he speed-walks across the stage where in just a couple days, the drama club will do an encore performance of their now Internet-famous staging of Alien: The Play. He needs to fix up the tail of the alien — ahem, xenomorph — because it’s starting to go limp from the two-a-day rehearsals they’ve been doing during Spring Break. The tail itself was a puzzle that had him testing out copper tubes and PVC pipes before realizing what would give it the perfect menacing sway: a hula hoop.” 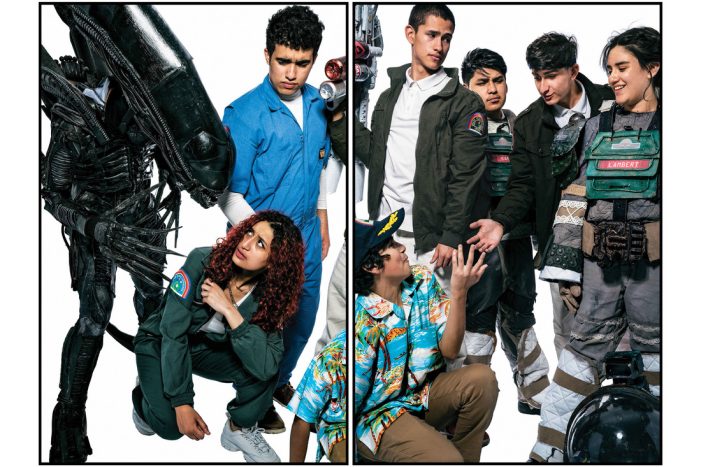 If you haven’t seen it already, YouTuber ButtonSmasher was kind enough to upload Alien: The Play to the world wide web for everyone to enjoy! Head on over and check it out!