Last March, the drama department of North Bergen High School took the Internet by storm with their stage interpretation of Alien! Not only did they garner the attention of Sir Ridley Scott and Sigourney Weaver, they got to put on an encore showing of Alien: The Play as part of 20th Century Fox’s Alien Day and Alien: 40th Anniversary celebrations!

A lucky few were able to see Alien: The Play in person. And now, thanks to ButtonSmasher on YouTube, the rest of the world can get in on the fun too!

Sigourney Weaver once again proved how amazing she is by attending the showing of Alien: The Play herself and took the time to meet and chat to the students responsible for this viral storm!

This scene has never looked so delicious… congrats to North Bergen High for an amazing evening — and thanks for this INCREDIBLE cake,@CarlosBakery! #AlienDay #Alien40th pic.twitter.com/MZErr1srpO

Congratulations to the cast and crew of North Bergen High School’s @alienanthology on their encore (SOLD OUT!) performance last night. Hard work and ingenuity will always result in something sweet! 🍰💫 pic.twitter.com/9V7mKNdp22

Local news website nj.com posted a pretty cool feature on Alien: The Play that is packed full of behind-the-scenes images that is certainly worth checking out!

The script was adapted from the film by English teacher Perfecto Cuervo, who also directs the play, and worked with art teacher Steven Defendini to create with help from the students the 15 sets, costumes and props, all largely made of recycled materials. With a budget of around $3,500, the cast and crew put the production together with what they could find to make it work while still giving the audience a good scare! 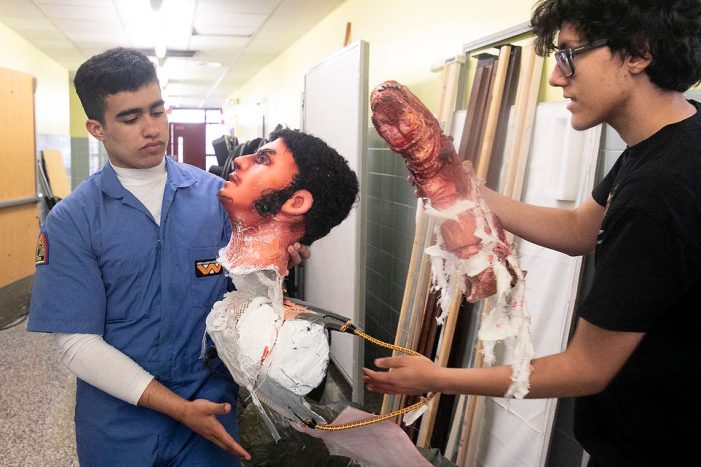